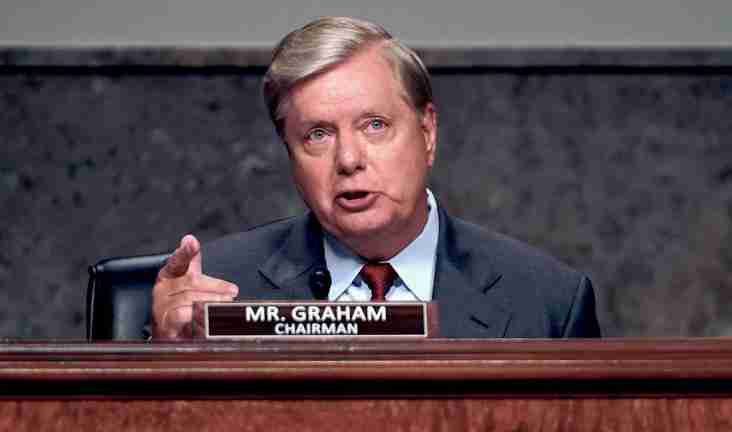 Washington (AP) – Sen. Lindsey Graham of South Carolina is wielding the gavel in the performance of his political life.

Once a biting critic of President Donald Trump, the Senate Judiciary Committee chairman on Monday launched conﬁrmation hearings for Judge Amy Coney Barrett in a bid to seal a 6-to-3 conservative majority on the Supreme Court. Hanging in the balance could be the future of government health care during a coronavirus pandemic that’s claimed more than 214,000 American lives. And Graham’s own career appears in jeopardy like never before.

For Graham, the Republican Senate majority and Trump himself, the hearings three weeks before Election Day could be a last stand. The proceedings are a display for voters of what it means to control the presidency and the Senate. But they’re also a real-time test of whether that’s enough to counter a jaw-dropping $57 million fundraising haul by Graham’s Democratic opponent in the South Carolina race, Jaime Harrison.

“Senator, how good is your word?” Harrison, 44, asked at a recent debate. Graham’s answer is complicated by his whipsaw shifts, particularly where Trump is concerned. He’s been both friend and foe of the belligerent president. Now, they play golf. He once vowed to oppose any Supreme Court conﬁrmation hearings in presidential election years. This week, he is chairing Barrett’s, and predicting she’ll be conﬁrmed to the high court this month to replace the late Justice Ruth Bader Ginsburg.

If so, Barrett, 48, would be one of the nine justices to hear arguments on issues that affect millions of people. One is a Trump administration-backed challenge to the Affordable Care Act that’s expected to come up a week after the election. Other charged topics that could be headed for the high court include abortion, immigration and gay marriage.

With early voting underway in South Carolina and many other states, Graham, 65, mounted the dais Monday amid his opponent’s withering fundraising, his own statements as one of the Senate’s most visible members, and Trump’s weak standing against Democrat Joe Biden in the ﬁnal stretch of the campaign.

“What he’s ﬁnding out is in the last four years it’s come back to bite him,” said Danielle Vinson, professor of politics and international affairs at Furman University. “There are lots of people who were familiar with him. He was willing to take on the party. When he changed to support Trump and embrace Trump, I really think it set some people off.”

And being a Republican in traditionally conservative South Carolina carries a great deal of weight. The state has not elected a Democrat to the Senate since 1998.

But the days leading up to the Barrett hearings were particularly challenging for Graham. On Friday, during a debate forum with Harrison – who is Black – Graham denied there was systemic racism in South Carolina.

“If you’re a young African American, an immigrant, you can go anywhere in this state. You just need to be conservative, not liberal,” Graham said.

Then on Sunday, Harrison’s campaign rocked the political world with its fundraising haul, propelled by contributions from around the country.

The third-quarter amount brings Harrison’s overall fundraising for the campaign to $86 million. Attributing the success to grassroots support, Harrison’s campaign said the $57 million came in the form of 1.5 million donations from 994,000 donors. The average contribution was $37.

Graham, acutely aware that the president won his states by double digits, tried to brush it off.

“There’s not enough money in the world to convince South Carolinians to vote for the radical liberal agenda,” Graham said. But weeks earlier, he’d complained on Fox News that he was “getting killed ﬁnancially” by Harrison.

What Graham stands for, and who he stands with, has been an issue. From the moment he dropped the gavel at Barrett’s hearing Monday, Graham will have broken his own vow to oppose Supreme Court conﬁrmations in presidential election years. He’s called Trump a “race-baiting xenophobic religious bigot” who “doesn’t have a clue about anything” relating to foreign policy and “doesn’t represent my party.” He and the late Sen. John McCain of Arizona, who was deeply loathed by Trump, were best friends and often delighted in mocking the president.

Yet Graham, acutely aware that Trump won his state in 2016 by 14 percentage points, has since become the president’s golf-playing buddy and political ally.

It was Graham’s ﬁery 2018 defense of Supreme Court nominee Brett Kavanaugh that helped forge his relationship with Trump, as well as renew support with some who hadn’t seen Graham as conservative enough to represent South Carolina.

Graham has called Kavanaugh’s conﬁrmation the “deﬁning moment” of the Trump presidency. At a White House event celebrating judicial appointments last year, Trump and Graham marveled at their friendship after the ferocious ﬁght for the 2016 presidential nomination. Graham was one of more than a dozen Republicans who ran against the New York real-estate mogul.

Back then, Trump had called Graham a “lightweight” and a “liberal,” and famously made public the senator’s cell phone number.

“After I got beaten like a dog, which he likes hearing,” Graham said of Trump, “he called me over to the White House and said, `I’d like you to help me.’ And I said, `I’d love to help you be a great president, because you’re now my president.’”

Next post Voting should improve your quality of life in 2020