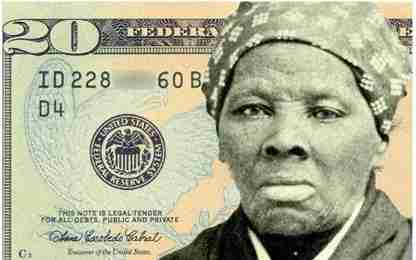 Will Donald Trump really replace Andrew Jackson with Harriet Tubman on the $20?

WASHINGTON – Treasury Secretary Steven Mnuchin is raising speculation that Harriet Tubman’s future on the $20 bill could be in jeopardy.

In a CNBC interview, Mnuchin recently avoided a direct answer when asked whether he supported the decision made by the Obama administration to replace Andrew Jackson on the $20 bill with Tubman, the 19th century African American abolitionist who was a leader in the Underground Railroad.

“People have been on the bills for a long period of time,” he said. “This is something we’ll consider. Right now, we have a lot more important issues to focus on.”

During last year’s campaign, Donald Trump praised Jackson, the nation’s seventh president, for his “history of tremendous success” and said the decision to replace his portrait with that of Tubman was “pure political correctness.”

Then-Treasury Secretary Jacob Lew announced last year that he had decided to place Tubman on the $20 bill as part of a make-over of the nation’s currency to improve security features on the bills. The new currency bearing Tubman’s portrait was scheduled to be unveiled in 2020, the 100th anniversary of passage of the 19th amendment giving women the right to vote.

Lew arrived at the decision to displace Jackson on the $20 bill after generating a loud outcry with an initial proposal to put a woman on the $10 bill replacing Alexander Hamilton.

In the CNBC interview, Mnuchin said, “The number one issue why we change the currency is to stop counterfeiting. So the issues of why we change it will be primarily related to what we need to do for security purposes.”

Sens. Chris Van Hollen and Ben Cardin, both Maryland Democrats, wrote a letter to Mnuchin on (last) Thursday urging him not to abandon plans to place Tubman, who was born in Maryland as a slave, on the $20 bill.

“Those we honor on currency make a statement about our nation and our values,” the senators wrote.

At the White House, press secretary Sarah Huckabee Sanders told reporters, “I’m not aware of any policy change. I’d certainly have to check into that.”

In a wide-ranging interview, Mnuchin also said the original goal of getting Congress to pass comprehensive tax reform by August “got delayed a bit,” but he stressed that the administration was still on track to have a measure signed into law by the end of this year.

Mnuchin’s comments on taxes came one day after Trump launched the administration’s fall push to overhaul the nation’s tax system with a speech in Springfield, Missouri. There he said the plan, details of which have yet to be revealed, would unlock strong economic growth, reduce the tax burden of the middle-class and encourage corporations to keep jobs in America.

Mnuchin rejected the idea that the administration has yet to settle on the details of the tax plan.

“We are on track to get this done by the end of the year,” he said. “So you’re going to see the detail come out (in September). It’s going to go through a committee process. We expect the House and Senate will get this to the president to sign this year and we couldn’t be more excited about the progress we’ve made.”

Mnuchin would not say whether Trump’s goal of reducing the top corporate tax rate to 15 percent from the current 35 percent would remain in the finished administration proposal, or whether it might be changed to a less ambitious cut to 20 or 25 percent.

“We’ll go through with the (congressional) committees and see where we end up,”

He expressed confidence that Congress will pass legislation needed to raise the government’s borrowing limit this fall and avoid a catastrophic default on the nation’s debt. Mnuchin has authority to use a range of bookkeeping maneuvers to avoid breaching the limit through Sept. 29, although private analysts believe the actual deadline for Congress increasing the current $19.8 trillion limit will be in mid-October.

He also stated that the administration has a good working relationship with Federal Reserve Chair Janet Yellen, but refused to say how many candidates, other than Yellen, President Donald Trump is considering for the Fed job when Yellen’s current term expires in February. Trump said in an interview last month that Yellen, Gary Cohn, head of Trump’s National Economic Council, and “two or three” other contenders were in the mix.

Yellen used a high-profile speech last Friday at a central bank conference in Jackson Hole, Wyoming, to defend the Dodd-Frank bank regulatory overhaul passed in 2010. She described it as a successful effort to make the financial system stronger following the 2008 financial crisis. Trump has called the measure a “disaster” and he and GOP lawmakers would like to rewrite it extensively to reduce regulatory burden on banks.

Asked if this was an area of conflict between Yellen and the administration, Mnuchin said, “I had breakfast with Fed Chair Yellen this morning. … we have a very constructive dialogue on a lot of issues including regulation.”

Next post What are ‘STEAM’ Subjects and Why Do They Matter?