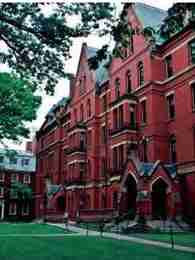 LAS VEGAS – Few college-bound kids lose their shot, and their slot, at their dream school once they get in, but it happened at one of the world’s most elite institutions and for a reason that has, until recently, hardly registered in the university admissions process: social media.

Harvard University’s decision to rescind admission offers to 10 incoming freshmen because of offensive Facebook posts comes at a time of heightened attention to free speech and student conduct on U.S. college campuses, and has stirred debate far beyond the halls of the Ivy League school.

Other schools say it’s an eye-opener for those involved in the admissions process.

“We’re going to continue to watch how this unfolds and, with other higher ed institutions, learn from it,” said Janet Bonkowski, spokeswoman for the University of Wisconsin in Green Bay.

Harvard rescinded the admission offers after discovering the students had traded offensive images and messages on a private Facebook group, student newspaper The Harvard Crimson reported. The posts were often sexually explicit and mocked Mexicans, the Holocaust, sexual assault and child abuse.

The Cambridge, Massachusetts, university declined to comment, but the school does tell accepted students their offers can be withdrawn if their behavior “brings into question their honesty, maturity or moral character.”

Its decision may have posts been rare, but the situation it addressed was not: young applicants crossing lines in their social media posts.

Mike Reilly, a former college admissions officer in Washington state and now an executive with the American Association of Collegiate Registrars and Admissions Officers, said Harvard’s move can be seen as incongruent with free speech.

But Nancy Beane, a high school counselor in Atlanta and president of the National Association for College Admission Counseling, said zero tolerance for racist comments should be the standard for all institutions of higher education.

In 2015, the national counselors association surveyed its members at more than 1,700 colleges and found less than a third reported rescinding an admissions offer each year. Nearly 70 percent of those colleges said it was because of a dishonest application, while 20 percent said it was over a disciplinary issue. Social media behavior wasn’t considered a reason to drop a student.

David Cruz, 22, who is studying hospitality management at the University of Nevada in Las Vegas, said Harvard did the right thing. The transfer student pointed to colleges across the country that have been criticized for not doing enough when it comes to troublesome student conduct, from reported sex assaults to racist incidents.

“Their students acted on their own, but that also represents the school,” Cruz said. “Whatever you post, everyone can see it, whether you’re trying to hide it or not.”

Some admissions officers can and do use Facebook, Twitter and other social media sites when assessing applicants, though they generally don’t patrol the internet for damaging information. Instead, they consider online posts when something specific is brought to their attention.

Still, social media content being used to oust a student is uncommon. The University of Wisconsin, for instance, doesn’t check applicants’ social media accounts and doesn’t have plans to start.

In general, dropping an admitted student is a last-resort move, reserved for the most egregious cases. Even then, the college usually will attempt to keep the student by confronting them with the hope that an explanation and a slap on the wrist will resolve the issue.

Harvey Mudd College in California has never rescinded an offer because of a social media profile, said Peter Osgood, its admissions director. But he recalls one instance where school officials discussed an objectionable post with an admitted applicant.

“This matter was dealt with privately and discretely, and that student became a wonderful citizen for the college, even a much valued tour guide,” Osgood said.

Next post Threats of lynching and murder unnerve lawmakers