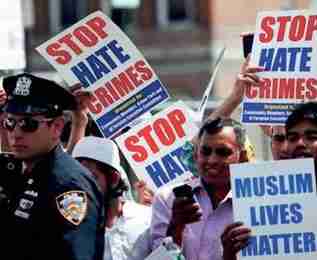 WASHINGTON – Hate crimes rose for the second straight year in 2016, with increases in attacks motivated by bias against blacks, Jews, Muslims and LGBT people, according to FBI statistics released Monday.

There were more than 6,100 hate crimes last year, up about 5 percent over the previous year. In 2015 and 2016, that number was driven by crimes against people because of their race or ethnicity.

More than half of the 4,229 racially motivated crimes were against black people, while 20 percent were against whites, the report shows. And Jews were targeted in more than half the 1,538 crimes that were motivated by religion. Crimes fueled by bias against LGBT people rose from 203 in 2015 to 234 last year. The yearly report is the most comprehensive accounting of hate crimes in the U.S. But authorities have long warned it is incomplete, in part because it is based on voluntary reporting by police agencies across the country.

The numbers likely reflect an uptick recorded by civil rights groups in harassment and vandalism targeting Muslims, Jews, blacks and others amid the presidential campaign, which included sharp rhetoric from Republican Donald Trump and others against immigrants, especially Muslims. There were 307 crimes against Muslims in 2016, up from 257 in 2015, which at the time was the highest number since the aftermath of the Sept. 11, 2001, terrorist attacks.

In releasing the figures, the FBI said hate crimes remain the “number one investigative priority” of its civil rights unit and pledged to continue collecting data on the problem. Attorney General Jeff Sessions has said it would be a top focus of his Justice Department.

On Monday, Sessions said the Justice Department is awaiting a full report from a task force on steps it can take to improve training for prosecutors and investigators, boost data collection on hate crimes and partner with local officials and communities.In the meantime, Sessions said, the department can continue to aggressively prosecute people who violate the civil rights of others.

“The Department of Justice is committed to ensuring that individuals can live without fear of being a victim of violent crime based on who they are, what they believe, or how they worship,” Sessions said in a statement.Advocates said they can’t adequately address the problem without a fuller understanding of its scope.

“There’s a dangerous disconnect between the rising problem of hate crimes and the lack of credible data being reported,” said Anti-Defamation League CEO Jonathan A. Greenblatt, who called for an “all-hands-on-deck approach” to address under-reporting. “Police departments that do not report credible data to the FBI risk sending the message that this is not a priority issue for them, which may threaten community trust in their ability and readiness to address hate violence.”