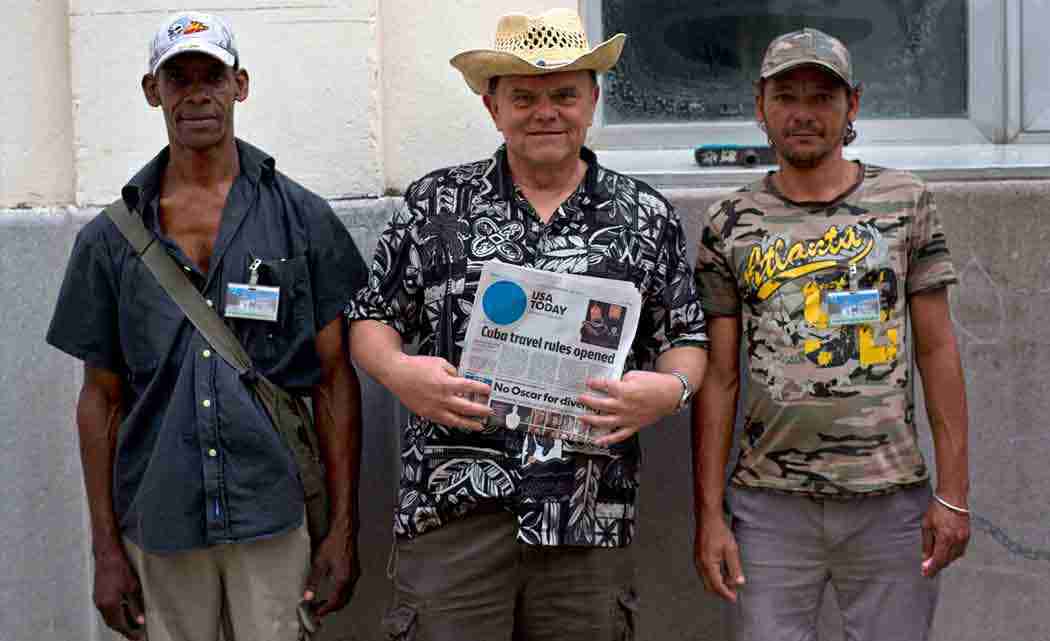 By BRADLEY KLAPPER and MICHAEL WEISSENSTEIN

HAVANA (AP) — The highest-level U.S. delegation to Cuba in decades begins two days of negotiations with grand promises by President Barack Obama about change on the island and a somber warning from Cuba to abandon hopes of reforming the communist government.

U.S. moves to restore diplomatic relations with Cuba and loosen the five-decade trade embargo have “the potential to end a legacy of mistrust in our hemisphere” and have “added up to new hope for the future in Cuba,” Obama said in his State of the Union address Tuesday night.

A senior Cuban official cautioned, however, that restoring diplomatic ties with the U.S. wouldn’t immediately lead to a full relationship between the Cold War foes after a half-century of enmity.

The message appeared designed to lower expectations before the arrival Wednesday of the U.S. delegation and just before Obama spoke to a Capitol crowd that included Alan Gross, whose release from Cuba in a prisoner exchange last month cleared the way for a new relationship.

Last month’s announcement of detente has spawned high optimism on both sides of the Florida Straits, but the high-ranking Cuban diplomat said: “Cuba isn’t normalizing relations with the United States. Cuba is re-establishing diplomatic relations with the U.S. The process of normalization is much longer and deeper.” Reporters were briefed on condition that the official not be quoted by name.

Republican leaders in the House and Senate are opposed to rapidly rebuilding relations as long as President Raul Castro remains firmly in control of Cuba. Other obstacles include billions of dollars in economic claims against Cuba’s government, American fugitives living freely in Cuba and the opposition of many Cuban-Americans.

Still, the biggest potential challenge is Castro’s government itself, which needs cash for its stagnant economy but fears Obama’s new policy merely repackages the longstanding U.S. goal to push him from power.

The U.S. has taken “steps in the right direction but there’s still far to go,” the Cuban official noted. He expressed optimism about the long-term prospects for U.S.-Cuban relations as long as Washington does not try to change Cuba’s single-party government and centrally planned economy — tenets of Cuba’s system the U.S. has long opposed.

Re-establishing relations “must be based in principals of international law,” the official said. “What do these principles mean for Cuba? Reciprocal respect for each country’s political and economic systems, avoiding any form of interference.”

American officials have repeatedly said they hope their new path of engagement will empower Cubans and soften the government’s control over the country.

Leading the U.S. delegation to Havana is Roberta Jacobson, the most senior American official to visit Cuba in 35 years. The rosters on both sides include officials well-known to one another from years of cautious efforts to improve cooperation.

Wednesday’s conversations are expected to start with a continuation of efforts by the two sides in recent years to promote what the State Department calls “safe, legal and orderly migration,” covering everything from the security of charter flights that travel regularly between Miami and Havana to rooting out fraudulent passports and partnering on potential search-and-rescue missions.

Thursday’s talks are trickier, scheduled to deal with the mechanics of re-establishing a U.S. Embassy in Havana headed by an ambassador, and a Cuban Embassy in Washington.

Immediate U.S. objectives include the lifting of restrictions on American diplomats’ staffing numbers and travel inside Cuba, easier shipments to the current U.S. Interests Section and unfettered access for Cubans to the building. The Americans say restoration of full diplomatic ties depends on how quickly the Cubans meet the U.S. requests. Jacobson will also meet Cuban activists and civil society representatives.

The U.S. and Cuba haven’t had diplomatic relations since 1961, soon after Fidel Castro seized power. Interests sections were established in the late 1970s as a means of opening a channel between the two countries, but any diplomatic goodwill they generated quickly evaporated.

Next post Microsoft to show off more Windows 10 features