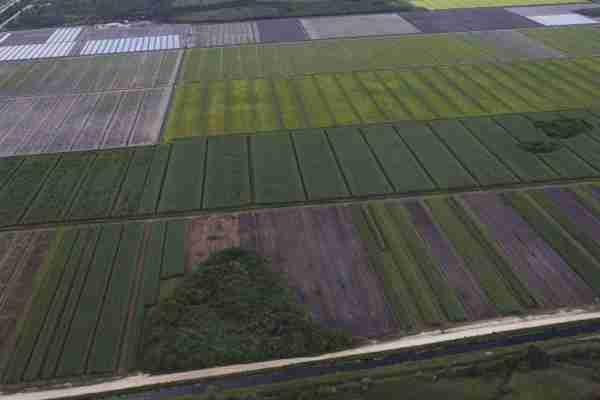 Above a church notice offering Escuela Domingo (Sunday school) is another placard urging passers-by to “FROG — Fully Rely on God.”

In his office down the road, Hendry County Commissioner Karson Turner is preaching a more active course. Hendry, he said, is struggling from a dependency problem akin to an alcoholic. For far too long, it has relied on farming — and dominant employer U.S. Sugar Corp. in particular — to prop up its economy. A 2005 study tied 74 cents of every dollar in Hendry’s economy to agriculture.

“We can’t bite the hand that feeds us, so to speak, because ag has sustained us for years.” said Turner. “But until we educate ourselves and recognize there is a 100 percent correlation between your educational prowess, or lack thereof, and your economic potential, or lack thereof, we’re not going to get past the status quo.”

Here’s the sobering status quo: Five years after the official end of the recession, Hendry remains the only one of Florida’s 67 counties still mired in double-digit unemployment. Its July jobless rate of 12.5 percent is not only more than 3 percentage points higher than any other county, it’s more than double Florida’s rate of 6.2 percent.

Efforts are under way across the county to resuscitate Hendry’s lagging economy, but change agents are wary of doing anything too radical that would mar a proud agriculture heritage dating back nearly a century.

It would be tempting to simply label this 1,100-square-mile central Florida territory on the southern banks of Lake Okeechobee as the county that Florida’s economic recovery left behind.

But Hendry’s problems go beyond the Great Recession.

For decades, its jobless rate repeatedly spiked during summer months into the teens and higher _ topping 25 percent at one point in the 1990s. Seasonal swings are the nature of an agriculture-based economy where migrant workers come and go. And there has been some improvement, with Hendry briefly falling below 10 percent unemployment earlier this year.

What troubles some of Hendry’s civic and political leaders is that other indicators of economic angst have worsened.

Standardized test scores have fallen and reliance on government aid has risen throughout the “recovery.” More than 80 percent of Hendry students in K-12 public schools were eligible for free and reduced-price lunches in the 2012-2013 academic year, up from 70 percent four years earlier. Nearly a third of residents are below poverty level.

With no new homes being built, economic development leaders are frustrated they can’t convince people to move here even if they win any business relocations.

Hendry’s population shrunk by more than four percent from 2010 to 2013, while Florida’s overall population grew by four percent. A consultant’s report hinted at a big reason: 60 percent of residents who earn bachelor’s degrees or higher do not return after graduation.

“It used to be when people would leave they’d come back,” said Billy McDonald, 62, who recently retired after 39 years as a lineman for the city of Clewiston’s electric department. “You don’t see that any more. Once they’re gone, they’re gone.”

Hendry could have been in far worse shape.

In 2008, Florida announced the largest land sale in the state’s history — a $1.75 billion plan to buy nearly 300 square miles of Everglades land owned by U.S. Sugar. Reclaiming the famed wetlands for restoration was trumpeted at the time as similar to the establishment of the first national park, Yellowstone. It would effectively have put U.S. Sugar out of business, albeit in a comfortable financial position.

The deal never went through. A worsening economy and political opposition prompted state officials to settle for a much smaller parcel.

Along with a new county administrator, Hendry brought in a new school superintendent not afraid to shake things up and has begun to improve both the county’s economic mix and educational institutions. “There’s a mindset in leadership that we can’t go with the status quo,” said Charles Chapman, who moved from Tallahassee to become Hendry’s county administrator 18 months ago.

The dilemma is how much, and how fast, the county can evolve when many residents appear resistant to change and negative talk about agriculture is a conversational third rail.

Gregg Gillman, president of the Hendry County Economic Development Council, prefaces every discussion about the need to diversify with a nod to agriculture’s importance. “We celebrate the heck out of agriculture here,” he said. “That’s who we are and that’s what got us where we are. But we need to do better.”

Hendry is on the right path, Gillman insisted, even if it doesn’t show up yet statistically. Over the past year, the county has announced four projects that will eventually add another 250 permanent jobs, including turning an abandoned state prison into a military training site and building a biomass gasification plant.

Pockets of tourism have been reinvigorated, including the ever-expanding Roland & Mary Ann Martins Marina & Resort, which has earned a global reputation and attracts thousands of anglers eager to fish for oversized bass in Lake Okeechobee.

The biggest economic hope on the horizon is AirGlades Airport, the former Riddle Field in central Hendry, which was recently certified by the FAA as the only privately owned international airport in the United States. The goal is to refashion AirGlades into a major hub for cargo, siphoning off some shipments now sent to Miami and then using U.S. Sugar’s rail line to move the freight by land. Someday, Hendry hopes it can become a major destination point for South American flowers.

Never in his 73 years here has Clewiston Mayor Phillip Roland been more excited about the economic future: “If the airport happens, it fixes this area for the next century. It will be for us what Disney World was to Orlando.”

Next post 6th person gets jail in loan scheme