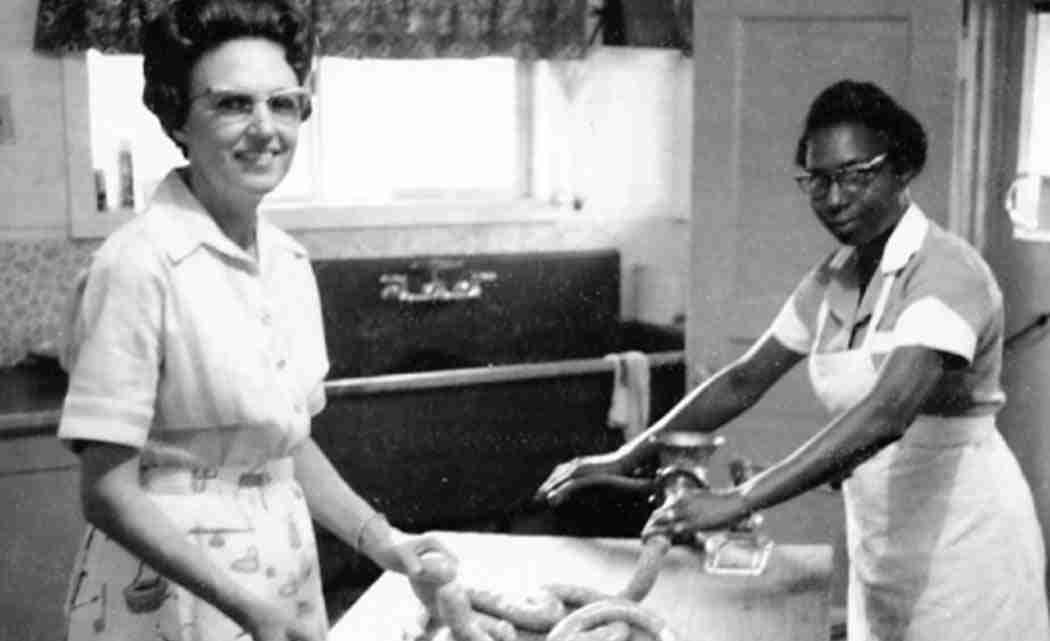 By WILLIAM JOHNSON
The Daily World

OPELOUSAS, La. — Eula Savoie started a business 60 years ago selling sausages made from a hand-operated meat grinder. Since then, it’s become a regionally known business delivering some of the best of Cajun cuisine to the world.

Savoie’s Sausage and Food Products is still located near Opelousas as Savoie’s kitchen was. Now, with 110 employees, it’s celebrating its 60th anniversary.

“Sixty years is a real milestone. There are not many niche food products companies that can say that,” said Robert van Leeuwen, a vice president with the company.

He said the company prides itself in offering food products that are as traditional as they are as delicious. Savoie’s specializes in smoked sausages, tasso, boudin, rice dressing mix and roux.

In 2001, the company launched a line of frozen entrees, including chicken and sausage gumbo, shrimp étouffée, pork stew and more.

“We place an emphasis on meeting consumer demands, and there is a great deal of demand nationwide for prepared meals,” van Leeuwen said. “We’re constantly innovating and expanding.”

The company is now creating a line of premium frozen appetizers, including Cajun boudin bites made with ground pork, onion and rice.

The company serves customers from Mississippi to Texas. Soon it plans to expand into Arkansas and Alabama through a growing relationship with major retailers such as Wal-Mart, Winn Dixie, Kroger’s and Albertson’s.

“It’s a huge plus for us and for consumers,” van Leeuwen said. “As more stores move here and the area continues to grow, so do we.”

The company is also working to expand distribution to grocery stores in additional southeastern states including Florida and Georgia.

It all began with Eula Savoie, still known affectionately as “Ms. Eula.”

“She started all this. She was an inspirational person and very hands on. You could find her in the plant every day,” van Leeuwen said.

She died in 2010, but van Leeuwen said her children and grandchildren remain active with the company.

“We’re now in the second generation of family ownership; moving into the third and growth is on our minds,” he said.

“No matter how large we might grow, we’ll always be a family company,” said company president Freddie Lafleur.

The company is still headquartered on the original Savoie’s Grocery site on Louisiana 742 just east of Opelousas.

“Many employees are from the same families who first worked for Ms. Eula proving we still consider ourselves first and foremost a family business. And when you taste any of Savoie’s Cajun food products, you’ll see for yourself what it means to be a part of our family,” Lafleur said.

In 1926, Eula Savoie was born to Ollie and Ezola Morris along the Little Bayou Teche. She grew up in a traditional Cajun home, speaking English and Cajun French. Because her mother was in poor health, Savoie learned to cook when she was just a child.

“Even though mother was sickly a lot of the time, it didn’t stop her from showing me how to do things,” Savoie said in a 2007 interview with this reporter. “My mom taught us how to make the sausage, boudin and hogshead cheese. That all comes from her. It’s all based on her recipes.”

In 1949, at her parents’ suggestion, she and her husband, Tom Savoie, purchased a small country grocery store on La. 742 and opened it as Savoie’s Grocery. While they didn’t know it at the time, they were laying the groundwork for a Cajun food empire.

“We bought it so I could keep working. It’s a job you can do while you’re pregnant,” Savoie said in the earlier interview.

In 1952, the Savoies purchased a 187-acre plot of land. They planned to go into the hog farming business and supplement their income from the store.

But in 1955, the price of hogs dropped and the cost of raising them became too much of a financial hardship. Savoie’s mother suggested slaughtering the unsold hogs to make sausage and other pork-based products they could sell.

Using a hand-operated No. 3 home meat grinder and her mother’s recipes, Savoie began making smoked sausage, boudin and hogshead cheese and selling them in her grocery store.

She said those items proved very popular and the store became a regular stop for truckers who traveled up and down the highway in the days before U.S. 190 cut through the area.

Soon, she branched out to selling her products throughout the area.

“That’s how it all started. I was delivering the sausage made from one hog each week,” she said.

As the business grew, she went from butchering one hog a week to two, then three. Soon she was buying hogs from other farmers.

The 1960s was a time of diversification for the company. Savoie started offering other Cajun food products, such as rice dressing mix and jarred roux.

“1962 is when we began selling through stores other than our own,” Savoie said.

In 1972, after she and her husband divorced, Eula Savoie bought out his interest in the business. At the time it consisted of 30 employees, working in a 5,300-square-foot processing plant behind the old grocery.

“We added new machinery as we could afford it, but never to replace an employee,” she said.

In 1990, when Louisiana created the term “Certified Cajun,” Savoie’s was one of the first companies to apply for and receive the designation.

As her business grew, one of the first South Louisiana companies owned by a woman collected awards.

In 1991, she received the Louisiana Business Person of the Year award from the Louisiana Department of Economic Development. That same year, Working Woman magazine recognized her with an Entrepreneurial Excellence Award.

In 2001, she was awarded the prestigious national Ernst & Young Entrepreneur of the Year Award for the Gulf Coast Region.

Also at this time, Savoie’s acquired Acadian Fine Foods in Church Point, allowing for the distribution of ready-prepared seafood pies and Cajun entrees.

Today, Savoie’s small grocery store has grown into a multimillion-dollar regional brand, supplying quality Cajun food products to national and independent grocery chains and stand-alone groceries. Her food, which can now be purchased online, is also a staple in some of the nation’s top restaurants.