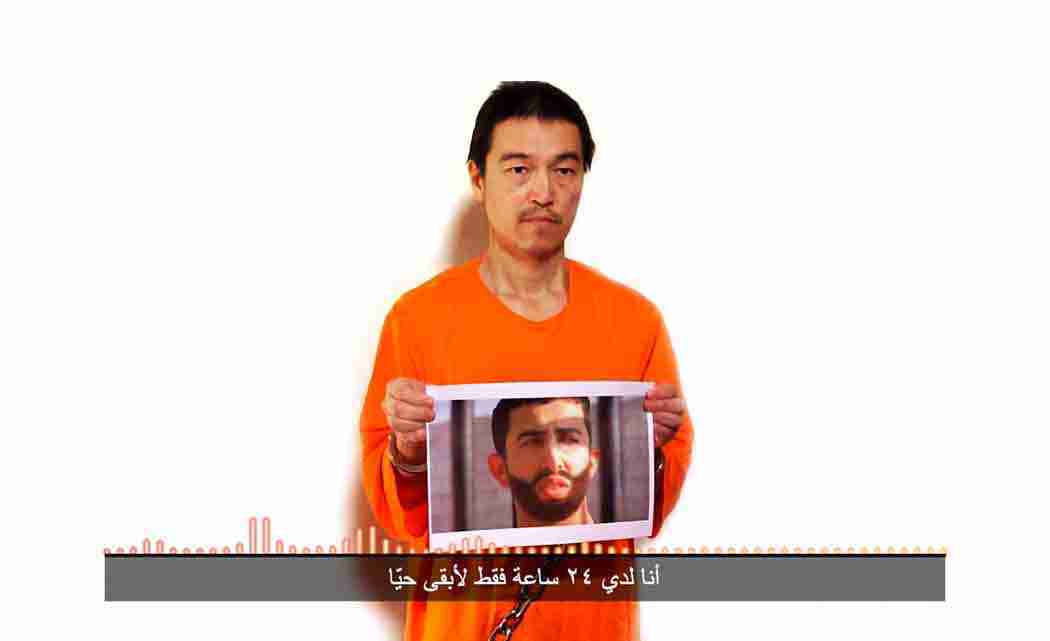 By ELAINE KURTENBACH and KARIN LAUB

TOKYO — The fates of a Japanese journalist and Jordanian military pilot were unknown Friday, a day after the latest purported deadline for a possible prisoner swap passed with no further word from the Islamic State group holding them captive.

“Government institutions are working around the clock on the case of pilot Muath al-Kaseasbeh,” Jordanian military spokesman Mamdouh al-Ameri said in a statement. “We will inform you of any developments in due time.”

He urged Jordanians not to listen to rumors.

Jordan has said it will only release an al-Qaida prisoner from death row if it gets proof the pilot is alive and so far has received no such evidence from the hostage-takers.

Officials in Tokyo also said they had no progress to report.

“There is nothing I can tell you,” said government spokesman Yoshihide Suga, reiterating Japan’s “strong trust” in the Jordanians to help save the Japanese hostage, freelance journalist Kenji Goto.

Suga said the government was in close contact with Goto’s wife, Rinko Jogo, who released a statement late Thursday pleading for her husband’s life.

An audio message purportedly posted online by jihadis said the pilot, Lt. Muath al-Kaseasbeh, would be killed if Sajida al-Rishawi, the al-Qaida prisoner, was not delivered to the Turkish border by sunset on Thursday, Iraq time. It was not clear from the recording what would happen to Goto if the Iraqi woman was not turned over by the deadline.

The authenticity of the recording could not be verified independently by the AP. But the possibility of a swap was raised Wednesday when Jordan said it was willing to trade al-Rishawi for the pilot.

The pilot’s father, Safi al-Kaseasbeh, said Friday that he had no word on the fate of his son and had not received any update from Jordanian authorities.

“I have nothing,” he said, speaking after Muslim noon prayers in the Jordanian capital of Amman.

With no news on the fate of either the pilot or Goto, their families’ agonizing wait dragged on.

Jordan faces a tough choice over whether to release al-Rishawi, 44, who faces death by hanging for her role in a suicide bombing, one of three simultaneous attacks on Amman hotels in November 2005 that killed 60 people. She survived because her belt of explosives didn’t detonate. She initially confessed, but later recanted, saying she was an unwilling participant.

She is from the Iraqi city of Ramadi and has close family ties to the Iraqi branch of al-Qaida, a precursor of the Islamic State group. Three of her brothers were al-Qaida operatives killed in fighting in Iraq.

Releasing al-Rishawi, implicated in the worst terror attack in Jordan, would be at odds with the government’s tough stance on Islamic extremism.

However, King Abdullah II faces public pressure to bring home the pilot, who was captured in December after his Jordanian F-16 crashed near the Islamic State group’s de facto capital of Raqqa in Syria. He is the first foreign military pilot to be captured since the U.S. and its allies began airstrikes against the Islamic State more than four months ago.

Jordan’s participation in the U.S.-led airstrikes is unpopular in the kingdom, and the pilot is seen by some as a victim of a war they feel the country shouldn’t be involved in.

The hostage drama began last week after the Islamic State group released a video showing Goto and another Japanese hostage, Haruna Yukawa kneeling in orange jumpsuits beside a masked man who threatened to kill them in 72 hours unless Japan paid a $200 million ransom. That demand later apparently shifted to one for the release of al-Rishawi.

The militants have reportedly killed Yukawa, 42, although that has not been confirmed.

The crisis prompted the Japanese Foreign Ministry to issue a warning Friday to journalists to avoid the border town in Turkey that could be a crossing point from Syria if a prisoner swap goes ahead.

It noted that Islamic State militants were likely aware of who was in the area. “We cannot dismiss the possibility of a kidnapping of Japanese journalists or of other risks to them,” it said.

“Under such circumstances, reporting on Turkish-Syrian border, even on the Turkey side, and of course in Syria, is likely to lead to unanticipated risks and be very dangerous,” the statement said, reiterating earlier warnings. “We strongly urge you to refrain from visiting or staying in the area for reporting, and to leave immediately.”

The warning followed news that a Japanese journalist helping cover a possible prisoner swap at the border died in a car crash near the area Thursday, according to Turkish officials.

Kazumi Takaya, based in Turkey for 22 years, was working as a translator for Fuji TV at the time of the crash, local media reports said.