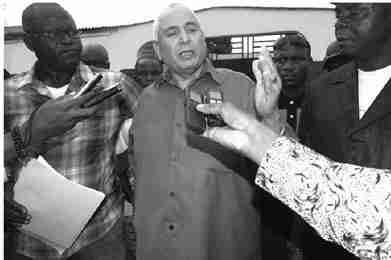 The Star and the GNN-Liberia

LIBERIA – Mr. Mohamed Omar Mohamed Talbi, Libyan Ambassador to Liberia, is calling on Africans, including their leaders, to jointly tackle the migrant crises in his country and on the continent.

“We have tried over the years to unite our country; unfortunately for us, there are people in Libya, who are not Libyans but are benefitting from this trade and are the ones who are doing all these bad things to spoil the good name of our country to the outside world.”

“But with a collective effort we will get there,” Ambassador Talbi stressed.

He made the statement Monday, December 4, when aggrieved Liberian youth and students, human rights groups, including the women groups, petitioned the Libyan Embassy in Monrovia during a peaceful protest demanding an end to the manhandling of black African migrants in the country.

The group, in a petition, further called on the Libyan government to provide protection and safety of Liberians in the country, asserting that brutalizing migrants is a human rights violation.

Protesters, who had gathered at the Libyan Embassy in Monrovia, had many inscriptions on placards including, “Black Africans are not commodities.”

After he had received their petition, Ambassador Talbi vowed to take the message to the Libyan government.

The Libyan diplomat urged everyone to also acknowledge that his country is also affected by the current situation.

He called on Africans and their leaders to jointly tackle the crisis in order to put an end to the manhandling of migrants.

“I have received your petition. I assure you people I am going to deliver it to the higher authority.

“My country and our people are victims just like you; what is happening in Libya is out of hand.

“In Libya since 2011, there have been no central government, no military and no police.”

“We went through civil war just like you people here in Liberia did some time ago and since that time the country is fragile, which makes it vulnerable.”

“No Libyans will do such a bad thing; we will never do that and we can assure you that we are going to find all those people who are doing the bad things in Libya and bring them to justice.”

“We Libyans are proud to be Africans.

You know Libya is proud to be part of a united Africa, so please go behind this conspiracy because we will never do such a bad thing to our African brothers and sisters.”

He furthered: “We have tried over the years to unite our country; unfortunately for us, there are people in Libya, who are not Libyans but are benefiting from this trade and are the ones who are doing all these bad things to spoil the good name of our country to the outside world.”

“With a collective effort, we will get there,” he noted.

Video footage on Libya concerning the manhandling of black African migrants have since gone viral on social media.

This has drawn stern condemnations from world leaders, including black Africans and their leaders.

These migrants are trying to make it across the Mediterranean Sea into Europe, where they hope to find greener pastures.

Hundreds of them have perished in the sea and desert as they make this very dangerous journey to Europe.

Some African countries have repatriated their citizens from Libya via plane and they have put in place some measures to ensure their citizens are welcome back home.

The Liberian protesters stressed that since this horrible news began emerging from that North African nation, there has been no official statement or position from the Liberian government concerning what they are doing about their compatriots in that country.

In another development, some of those Liberians fleeing said they had to disguise themselves to leave Libya via Guinea during this unbearable situation where many other Africans were humiliated and sold as low as US$200.