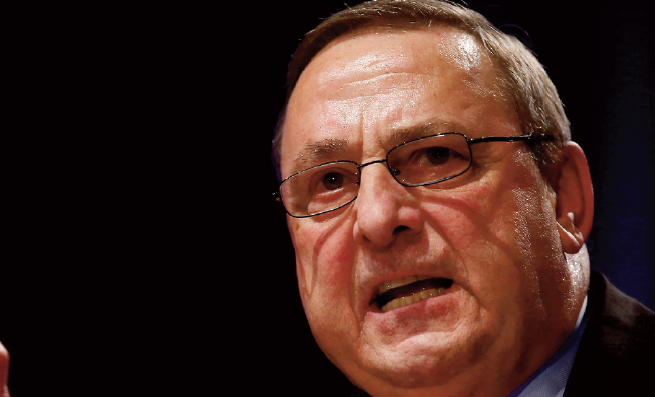 AUGUSTA, Maine – Republican Gov. Paul LePage apologized Friday for his remark about out-of-state drug dealers impregnating “young white” girls, calling it a slip of the tongue and saying he didn’t mean to inject race into discussion of Maine’s heroin epidemic.

described the drug dealers as “guys with the name D-Money, Smoothie, Shifty” and added, “Half the time they impregnate a young white girl before they leave.”

“I was going impromptu, and my brain didn’t catch up to my mouth. Instead of ‘Maine women,’ I said ‘white women,’” said LePage, who’s white. He noted that, according to the census, Maine is the nation’s whitest state.

When asked if the nicknames for the drug dealers imply they are black, LePage replied, “I don’t know where the”re from. I don’t know if they’re white, black, Asian.”

He also chastised the assembled reporters, saying, “Get your heads out of the sand, please.” He added: “I probably couldn’t get so many of you here without saying something foolish.”

The governor’s comment Wednesday evening in Bridgton drew criticism from Maine and beyond after a Republican activist called attention to it a day later.

The Bridgton event was a town hall-style meeting in which the governor was asked about Maine’s drug epidemic. He has previously talked about out-of-state drug dealers being the major supplier of heroin in Maine, but this time added the comment about drug dealers impregnating women.

Democratic state Sen. Linda Valentino said after LePage’s news conference that she doesn’t think LePage is racist but that the comment was.

He’s also in the midst of an unrelated drive by political opponents to punish him for his actions that led an organization to rescind a job offer to Democratic House Speaker Mark Eves. An independent report indicated LePage put pressure on a charter school operator and his education commissioner withheld a payment after learning that Eves was hired as the organization’s president.

LePage has said on the campaign trail that he’d tell President Barack Obama to “go to hell,” and soon after he was elected to his first term, he told the Portland chapter of the NAACP to “kiss my butt.” He previously likened the IRS to the Gestapo, called protesters “idiots” and said a political foe liked to “give it to the people without Vaseline.”