Man charged with setting fire in liquor store during riots 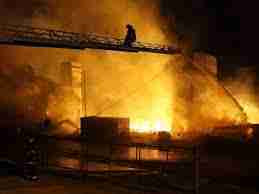 BALTIMORE – A man has been charged in a federal criminal complaint with setting a fire in liquor store during Baltimore’s riots.

Fire investigators later determined those locations were “areas of origin” for a fire that caused an estimated $350,000 in damage, prosecutors said. They said city cameras also captured Stewart in the area at the time, and he was later identified by multiple confidential informants of the federal Bureau of Alcohol, Tobacco, Firearms and Explosives.

According to the affidavit filed with the criminal complaint, looters set fires inside the store in the Penn North neighborhood on April 27.

Prosecutors say the fires caused serious injury to one of the store’s owners, and caused an estimated $350,000 in damage.

John Chae, one of the owners of the Fireside who was badly injured when the store was attacked, said Thursday that he had “mixed emotions” about the arrest — in part because he still blames Rawlings-Blake and other city officials for allowing the unrest to happen.

“It isn’t so much the perpetrator, it’s the city, the mayor that I’m angry with,” Chae said. “I am relieved that they did catch him, whoever it was, but what good is it going to do? … I’m not going to say I’m ecstatic. I’m not going to be jumping up and down for joy, because my livelihood was taken away.”

Prosecutors said the federal criminal complaint against Stewart was filed Sept. 24. He was arrested Monday on separate state charges, including second-degree assault, threatening arson and malicious destruction of property, from earlier in April.

Prosecutors say Stewart, who was arrested Monday on unrelated state charges, will have an initial appearance in federal court in Baltimore on Friday.

Next post Obama decries 'routine' response of country to shootings