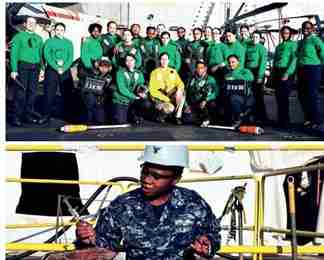 The USS Theodore Roosevelt left its homeport of San Diego Oct. 6 and returned on May 7. On February 28 a team of 35 U.S. sailors joined to successfully launch over 35 aircraft aboard USS Theodore Roosevelt. ABE1 Banicia Mattox (bottom photo above) is from Miami and is a part the all-woman flight deck team responsible for facilitating every aspect of launch and landing of aircraft. While female sailors have manned the deck of US aircraft carriers for more than 20 years, this crew may be the first crew controlling movement of aircraft and the waist catapults to be all women.