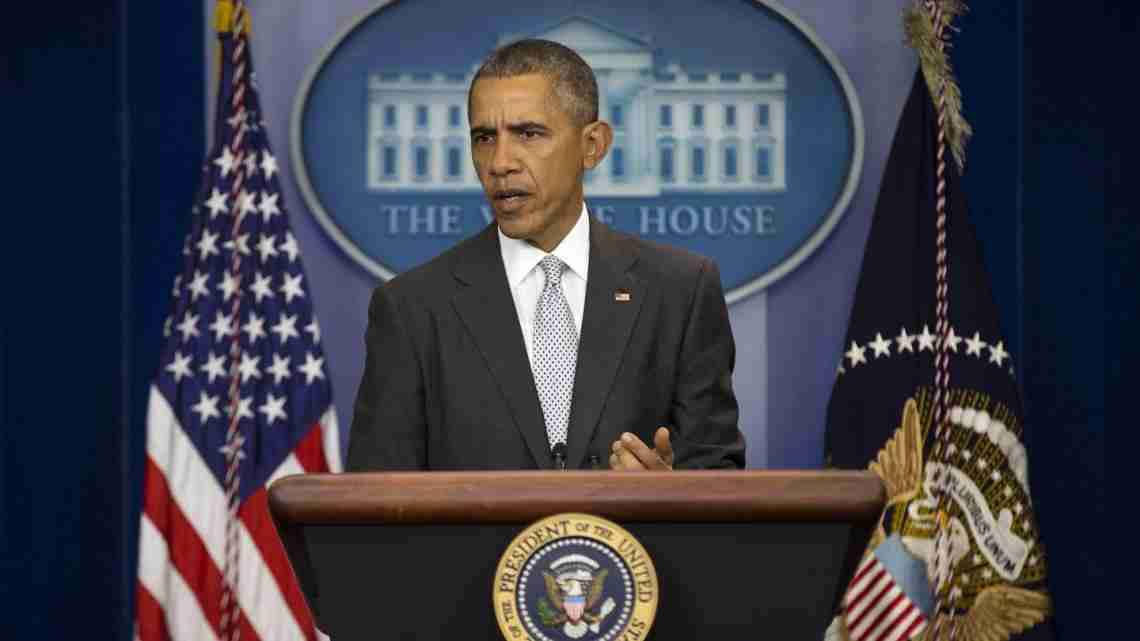 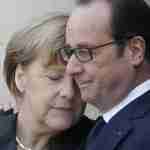 French President Francois Hollande embraces German Chancellor Angela Merkel, left, as she arrives at the Elysee Palace, Paris, Sunday, Jan. 11, 2015. A rally of defiance and sorrow, protected by an unparalleled level of security, on Sunday will honor the 17 victims of three days of bloodshed in Paris that left France on alert for more violence. (AP Photo/Thibault Camus)

By ANGELA CHARLTON and SYLVIE CORBET
PARIS (AP) – French President Francois Hollande blamed the Islamic State group for orchestrating the deadliest attacks inflicted on France since World War II and vowed Saturday to strike back without mercy at what he called “an act of war.”

Speaking after an emergency security meeting to plan his government’s response, Hollande declared three days of national mourning and raised the nation’s security to its highest level.

Hollande blamed the carnage on what he called “a terrorist army, the Islamic State group, a jihadist army, against France, against the values that we defend everywhere in the world, against what we are: a free country that means something to the whole planet.”

As he spoke, French anti-terror police worked to identify potential accomplices to the attackers known to have committed the attacks.

The perpetrators, at least in public, remained a mystery: their nationalities, their motives, even their exact number. Authorities said eight died, seven in suicide bombings, a new terror tactic in France. Police said they shot and killed the other assailant.

World leaders united in sympathy and indignation, New York police increased security measures, and people worldwide reached out to friends and loved ones in France.

The violence raised questions about security for the millions of tourists who come to Paris and for world events routinely hosted in the normally luminous capital, where troops were deployed to support police trying to restore order.

One of Europe’s most heavily visited tourist attractions, the Disneyland theme park east of the capital, announced it would not open for business Saturday, a rarity.

Prosecutor’s office spokeswoman Agnes Thibault-Lecuivre said authorities couldn’t rule out the possibility that other militants involved in the attack remained at large.

Hollande said France, which is already bombing IS targets in Syria and Iraq as part of the U.S.-led coalition, and has troops fighting militants in Africa, “will be merciless toward the barbarians of Islamic State group.”

“It’s an act of war that was prepared, organized, planned from abroad, with internal help,” he said.

Reflecting fears in other European capitals of the risk of coordinated or copycat attacks, the British government scheduled its own emergency COBRA intelligence committee overseen by Prime Minister David Cameron. Italy said it, too, was raising security levels on borders and major public places.

Three suicide bombs targeted spots around the national Stade de France stadium, north of the capital, where Hollande was watching an exhibition soccer match between France and the defending World Cup champions Germany. Fans inside the stadium recoiled at the sound of explosions, but the match continued amid rising spectator fears.

Around the same time, fusillades of bullets shattered the clinking of wine glasses in a trendy Paris neighborhood as gunmen targeted a string of cafes, which were crowded on an unusually balmy November night. At least 37 people were killed, according to Paris Prosecutor Francois Molins.

The attackers next stormed a concert hall, the Bataclan, which was hosting the American rock band Eagles of Death Metal. They opened fire on the panicked audience and took members hostage. As police closed in, three detonated explosive belts, killing themselves, according to Paris police chief Michel Cadot.

Another attacker detonated a suicide bomb on Boulevard Voltaire, near the music hall, the prosecutor’s office said.

The Bataclan was the scene of the worst carnage.

Video shot from an apartment balcony and posted on the Le Monde website Saturday captured some of that horror as dozens of people fled from gunfire outside the Bataclan down a passageway to a side street.

At least one person lies writhing on the ground as scores more stream past, some of them bloodied or limping. The camera pans down the street to reveal more fleeing people dragging two bodies along the ground. A woman can be seen hanging by her hands from an upper-floor balcony railing in an apparent desperate bid to stay out of the line of fire.

Sylvain, a tall, sturdy 38-year-old concert-goer, collapsed in tears as he recounted the attack, the chaos and his escape during a lull in gunfire.

“I was watching the concert in the pit, in the midst of the mass of the audience. First I heard explosions, and I thought it was firecrackers.

“Very soon I smelled powder, and I understood what was happening. There were shots everywhere, in waves. I lay down on the floor. I saw at least two shooters, but I heard others talk. They cried, `It’s Hollande’s fault.’ I heard one of the shooters shout, `Allahu Akbar,”’ Sylvain told The Associated Press. He spoke on condition that his full name not be used out of concern for his safety.

He was among dozens of survivors offered counseling and blankets in a municipal building set up as a crisis center.

Hollande declared a state of emergency and announced renewed border checks along frontiers that are normally open under Europe’s free-travel zone.

In a televised Friday night address he appealed to citizens to maintain “a determined France, a united France, a France that joins together and a France that will not allow itself to be staggered, even if today there is infinite emotion faced with this disaster, this tragedy, which is an abomination, because it is barbarism.”

President Barack Obama, speaking to reporters in Washington, decried an “attack on all humanity,” calling the Paris violence an “outrageous attempt to terrorize innocent civilians.”

A U.S. official briefed by the Justice Department says intelligence officials were not aware of any threats before Friday’s attacks.

The Disneyland Paris theme park announced it would not open for business Saturday but billed the move as a matter of sympathy, not security.

Disney said in a statement it would remain closed “in light of the recent tragic events in France and in support of our community and the victims of these horrendous attacks.” Some 14.2 million people visited the attraction last year.

Paris is expected to host 80 heads of state, including Obama, for a climate summit in two weeks. In June, France is scheduled to host the European soccer championship,  with the Stade de France a major venue.

And Paris-based UNESCO is expecting world leaders Monday for a forum about overcoming extremism. Iranian President Hassan Rouhani canceled a trip because of Friday’s attacks. Hollande canceled a planned trip to this weekend’s G-20 summit in Turkey.

France has been on edge since January, when Islamic extremists attacked the satirical newspaper Charlie Hebdo, which had run cartoons of the Prophet Muhammad, and a kosher grocery. Twenty people died in those attacks, including three shooters.

On Friday night they targeted young people enjoying a rock concert and ordinary city residents celebrating the end of the work week and cheering their nation’s soccer squad as it took on the defending World Cup champions.

France has seen several smaller-scale attacks or attempts this year, including on a high-speed train in August when American travelers overpowered a heavily armed man.

French authorities are particularly concerned about the threat from hundreds of French Islamic radicals who have traveled to Syria and returned home with skills to mount attacks.

“The big question on everyone’s mind is: Were these attackers, if they turn out to be connected to one of the groups in Syria, were they homegrown terrorists or were they returning fighters?” said Brian Michael Jenkins, a terrorism expert and senior adviser to the president of the Washington-based RAND Corporation. “That will be a huge question.”