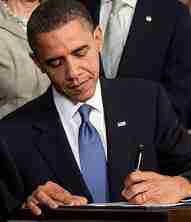 Barack Obama signing the Patient Protection and Affordable Care Act at the White House on March 23, 2010.

Leaders lack the votes to pass something and face a fresh obstacle – the Senate parliamentarian ruled Friday that Republicans only have the ability to dismantle the law with 51 votes until the end of the month.

It’s among several health issues lawmakers face when they return from summer recess, even as fights over the budget and helping Texas recover from Hurricane Harvey grab center stage.

WHEN WE LEFT OFF IN LATE JULY

The excruciating last roll call failed 51-49. Three Republicans voted “no,” one more than McConnell could afford to lose. President Donald Trump used August to insult McConnell for that flop, even suggesting he might need to relinquish his leadership post, inflaming tensions between the White House and congressional Republicans and lacerating party unity.

Republicans have used a procedure that’s prevented Democrats from killing the health bill by filibuster. It takes 60 votes to defeat a filibuster. Without that special step, Republicans controlling the Senate 52-48 would need support from eight Democrats to repeal Obamacare, impossible given unanimous Democratic opposition.

The safeguard against filibusters was included in a budget for the government’s 2017 fiscal year that Republicans pushed through Congress in January.

That protection expires at the end of September, the Senate’s nonpartisan parliamentarian, Elizabeth MacDonough, has ruled. That’s when the fiscal year ends.

Sen. Bernie Sanders, I-Vt., the ranking member of the Budget Committee, said in light of the ruling, “we need to work together to expand, not cut, health care for millions of Americans who desperately need it.” That leaves Republicans with only September to nurture their slim repeal hopes unless the GOP-run chamber votes to overrule her.

There’s no sign sponsors have enough Republicans to prevail and McConnell hasn’t been publicly encouraging. Further reducing its chances, lawmakers need September to prevent a damaging federal default and a government shutdown, help Texas recover from Harvey and craft a GOP tax overhaul. “If people can show me 50 votes for anything that would make progress on that, I’ll turn back to it,” McConnell said in early August of repealing Obamacare.

Even this will be uphill.

Obama’s law requires the cost reductions and government subsidies to insurers, but a court has ruled Congress hasn’t legally authorized the payments. Obama and Trump have continued them, but Trump keeps threatening to stop, calling them an insurance company bailout. Many conservatives agree. Yet those payments are a priority for Democ- rats and many Republicans. They and the nonpartisan Congressional Budget Office say halting the subsidies will force insurers to boost premiums for millions.

In exchange, Republicans want to revise parts of Obama’s law. They’ve suggested making it easier for insurers to avoid some Obama coverage requirements or steps like curbing lawsuits against health care providers.

Alexander wants to extend the insurers’ subsidies for one year while Democrats want two years or more. Another hurdle: Democrats have little interest in relaxing Obama’s law.

“Nobody is going to put their fingerprints on sustaining Obamacare without some sort of reform element,” Rep. Tom Cole, R-Okla., said of Republicans.

Democrats and most Republicans want to extend the program and success seems likely. First they must compromise on details like how many years to finance it and at what levels.

Washington pays for most of the federal-state program, and in recent years the federal share was bumped up by 23 percent for each state. Many Republicans want to phase out that boost, but Democrats are resisting.

Some Republicans say Congress needn’t act by Sept. 30 because states have enough money to continue coverage. Democrats and program advocates say without fresh funds by September’s end, some states would be forced to make cuts to wind down services