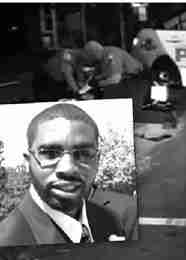 WASHINGTON – The District of Columbia’s mayor says a police officer who fatally shot an unarmed black motorcyclist last year has been asked to resign.

Prosecutors said Wednesday that they won’t file charges against the officer in the 2016 death of Terrence Sterling of Fort Washington, Maryland, because there was insufficient evidence to prove he used unreasonable force or wasn’t acting in self-defense. City officials have acknowledged that the officer, Brian Trainer, violated policy by not activating his body camera until after the shooting, which happened following a high-speed chase.

Mayor Muriel Bowser said in a statement Wednesday evening that it was “unacceptable” that the officer didn’t activate the camera and that she doesn’t “believe there can be real accountability if the officer remains on the force.” Police are completing their own investigation, but Bowser says police have asked for his resignation.

The Metropolitan Police Department released a statement Wednesday that said Trainer will remain on administrative leave as the department begins its own investigation now that the federal probe is over.

Officials have said the chase began when Sterling pulled in front of a police cruiser and accelerated through a red light and ended with the 31-year-old Sterling revving his motorcycle into a police cruiser’s door. An attorney for Sterling’s family says he didn’t collide with the car with any great force. Federal officials said the level of alcohol in Sterling’s blood was 0.16, twice the legal limit. They said he also tested positive for marijuana.

In response to the shooting, city 911 operators have been instructed to remind officers to turn their cameras on, and officers have been ordered to acknowledge the reminder.

The department has not specified the race of the officer, but Jason Downs, the lead attorney for Sterling’s family, has said his understanding is the officer is white.