Pakistan school: Devastation where 148 were slain 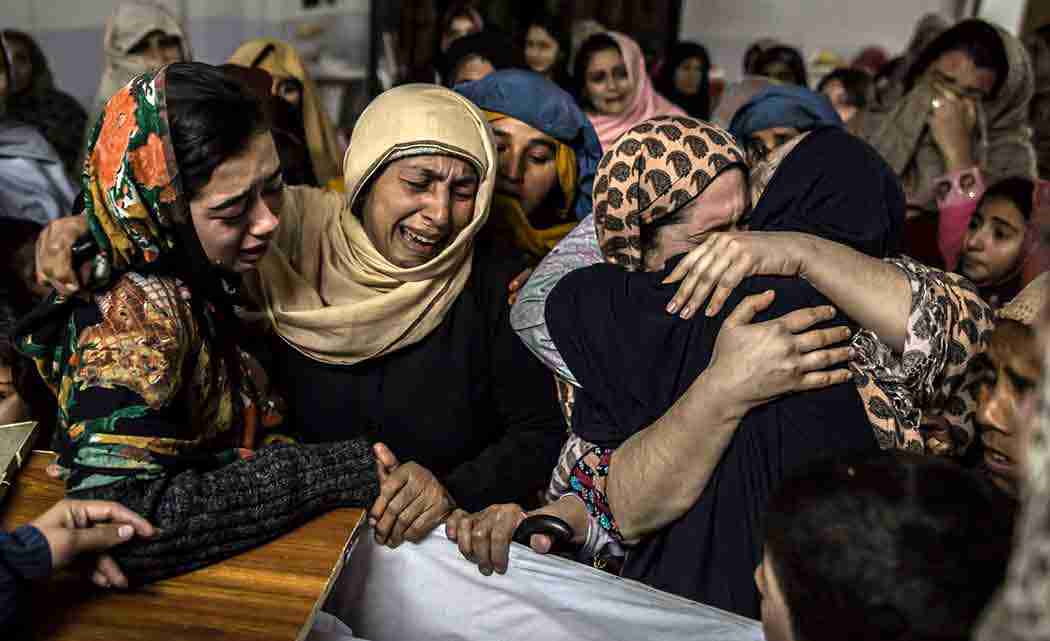 By REBECCA SANTANA and RIAZ KHAN

PESHAWAR, Pakistan (AP) — The Taliban massacre that killed 148 people, mostly children, at a military-run school in northwestern Pakistan left a scene of heart-wrenching devastation, pools of blood and young lives snuffed out as the nation mourned and mass funerals for the victims got underway Wednesday.

The attack at the Army Public School and College in the city of Peshawar on Tuesday was the deadliest slaughter of innocents in the country and horrified a nation already weary of unending terrorist assaults.

Blood was still splattered on the floor and the stairs as media were allowed inside the school a day after the attack. Torn notebooks, pieces of clothing and children’s shoes were scattered about amid broken window glass, door frames and upturned chairs. A pair of child’s eyeglasses lay broken on the ground.

Prayer vigils were held across Pakistan and in other schools, students spoke of their shock at the brutal slayings in Peshawar, where children and teenagers were gunned down and some of the female teachers burned alive. Army commandos fought the Taliban in a day-long battle until the school was cleared and all the attackers were dead.

The attack began when seven Taliban gunmen, explosives strapped to their bodies, scaled a back wall using a ladder to get into the school on Tuesday morning. Once inside, they made their way into the main auditorium where many students had gathered for an event, military spokesman Maj. Gen. Asim Bajwa told reporters during the tour Wednesday.

The militants then made their way to the hall’s stage and started shooting at random. As students tried to flee for the doors, they were shot and killed. The military recovered about 100 bodies from the auditorium alone, Bajwa said.

“This is not a human act,” he added. “This is a national tragedy.”

The government declared a three-day mourning period, starting Wednesday. Some of the critically wounded adults — members of the school staff — died overnight, and authorities raised the overall death toll to 148. The number of students killed remained at 132. Another 121 students and three staff members were wounded in the assault.

The body of the school principal, Tahira Qazi, was retrieved overnight from the debris. Qazi was inside her office when the militants made their way into the administration building, some 20 meters (yards) from the auditorium. She ran and locked herself into the bathroom but the attackers threw a grenade inside, through a vent, and killed her, Bajwa said.

Several funerals were also held overnight, but most of the victims were buried Wednesday.

“They finished in minutes what I had lived my whole life for, my son,” said laborer Akhtar Hussain, tears streaming down his face as he buried his 14-year-old, Fahad. He said he had worked for years in Dubai to earn a livelihood for his children.

“That innocent one is now gone in the grave, and I can’t wait to join him, I can’t live anymore,” he wailed, banging his fists against his head.

The Taliban said the attack was revenge for a military offensive against their safe havens in the northwest, along the border with Afghanistan, which began in June. Analysts said the school siege showed that even diminished, the militant group still could inflict horrific carnage.

The attack drew swift condemnation from around the world. President Barack Obama said the “terrorists have once again showed their depravity.”

Pakistan’s teenage Nobel Peace laureate Malala Yousafzai — herself a survivor of a Taliban shooting — said she was “heartbroken” by the bloodshed.

Even Taliban militants in neighboring Afghanistan decried the killing spree, calling it “un-Islamic.”

Pakistani Prime Minister Nawaz Sharif pledged to step up the campaign that — along with U.S. drone strikes — has targeted the militants.

“We must not forget these scenes,” Sharif said Wednesday at a top-level meeting in Peshawar. “The way they left bullet holes in the bodies of innocent kids, the way they tore apart their faces with bullets.”

Later Wednesday, Sharif’s office said he approved an order lifting the ban on the death penalty for terrorist crimes, which has been in place since 2008. Sharif lifted the ban last year but then re-imposed it when his government launched peace talks with militants.

The move followed a top-level meeting between the prime minister and military and civilian law enforcement officials on the legal system’s “inadequacies in punishing terrorists.”

Earlier, Sharif said he spoke to Afghan President Ashraf Ghani late Tuesday to discuss how both countries could do more to fight terrorism. The two agreed to launch fresh operations on their respective sides of the border, Sharif said, and pledged to “clean this region from terrorism.”

Pakistan has in the past criticized Afghanistan for what it said was a failure to take action against militants on their side of the border, specifically faulting Kabul for allegedly not helping when Pakistan launched the North Waziristan operation in June. Afghanistan has also repeatedly accused Pakistan of harboring militants in its tribal regions.

But Bajwa, the army spokesman, said that after the Peshawar massacre, Islamabad is “hoping that there will be a strong action, a corresponding action from the Afghanistan side, from across the border, in the coming days.”

In neighboring India, which has long accused Pakistan of supporting anti-India guerrillas, schools on Wednesday observed two minutes of silence for the Peshawar victims at the urging of Prime Minister Narendra Modi, who called the attack “a senseless act of unspeakable brutality.”

In an email on Wednesday, the Pakistani Taliban spokesman Mohammad Khurasani claimed the attack was justified because the Pakistani army has allegedly long been killing innocent children and families of their fighters.

He vowed more such militant attacks and told Pakistani civilians to detach themselves from all military institution.

The Pakistani Taliban also posted photographs of six Islamic fighters they said took part in the Peshawar assault. In one photo, the militants are seen wearing army fatigues, standing with a local Taliban leader in what the statement claimed one of the Pakistani tribal regions.