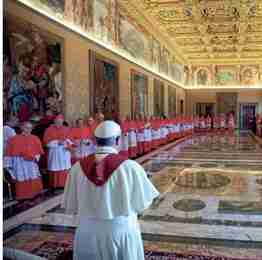 VATICAN CITY – Pope Francis named 17 new cardinals Sunday, adding like-minded prelates from dioceses big and small to the club who will elect the next pope. Three were Americans in a clear signal to the conservative U.S. church hierarchy that Francis wants moderate pastors at the helm of the U.S. church.

Tobin has openly opposed efforts by Indiana Gov. Michael Pence, now Donald  Trump’s running mate, to bar Syrian refugees from being resettled in the state. A U.S. federal appeals court recently used stinging language in a ruling that will prevent the Republican vice presidential candidate from barring refugee resettlement in Indiana for now.

Francis has made the plight of refugees one of the hallmarks of his papacy, even bringing a dozen Syrian refugees home with him from Lesbos, Greece. He has asserted that anyone who wants to build a wall along the U.S.-Mexico border to keep out migrants as Trump has proposed is “not Christian.”

“You can find a political message” in the Tobin appointment, said Massimo Faggioli, a Villanova University expert on the Vatican.

The other new U.S. “princes” of the church include the leading U.S. moderate, Chicago Archbishop Blase Cupich, and outgoing Dallas Bishop Kevin Farrell, whom Francis tapped in August to head the Vatican’s new family and laity office.

“Wow. I guess we are back!” marveled U.S. Ambassador Kenneth Hackett, a reference to the dearth of U.S. cardinal appointees in recent years.

Thirteen of the new cardinals, including all the Americans, are under age 80 and thus eligible to vote in a future conclave to elect Francis’ successor, the key job of a cardinal. Francis will elevate all 17 at a ceremony Nov. 19, on the eve of the closure of his Holy Year of Mercy.

As is Francis’ tradition, the new cardinals hail from some of the most far-flung and peripheral corners of the globe: Bangui, Central African Republic; Port Louis, Mauritius and Tlalnepantla, Mexico.

Significantly, only one Italian elector was named: Francis’ ambassador to “the beloved and martyred Syria,” Cardinal- elect Mario Zenari.

And one of the over-80 cardinals is a clear sentimental favorite: the Rev. Ernest Troshani Simoni of Albania.

Simoni, who turns 88 later this month, brought Francis to tears when he re- counted his life story to the pope during Francis’ 2014 visit to Tirana: the two decades he spent imprisoned, tortured and sentenced to forced labor for refusing to speak out against the Catholic Church during Albania’s brutal communist rule. After embracing Simoni that day, Francis said: “Today I touched martyrs.” Francis has made it a point to no longer automatically name cardinals from big dioceses as had been the practice for centuries. The Italian cities of Venice and Turin, for example, have been without cardinals for several years.

The same goes for the U.S., where such staunchly Catholic archdioceses as Philadelphia, which hosted Francis last year at the Catholic Church’s big family rally, was passed over again. Philadelphia is headed by the conservative Archbishop Charles Chaput, who has insisted on traditional church doctrine on issues such as whether civilly remarried couples can receive Communion areas where Francis has sought greater flexibility.

“It’s a clear message to the United States Catholic bishops about the kind of church Francis has in mind,” Faggioli said.

Francis did make an exception to his own rule Sunday by returning a red hat to Brussels after it went without a cardinal during the tenure of Archbishop Andre Joseph Leonard, a staunch traditionalist. Francis accepted Leonard’s retirement in 2015 and appointed a more progressive replacement in Archbishop Jozef De Kesel, who on Sunday was named a cardinal one of only five Europeans named.

The geographic distribution of electors still heavily favors Europe, with 54 voting age cardinals. The Americas come next with 34 cardinals in North, South, Central

America and the Caribbean. Africa has 15,

Asia 14 and Oceania four. On Nov. 28, Cardinal Theodore-Adrien Sarr of Senegal will turn 80, bringing the voting number down to 120.