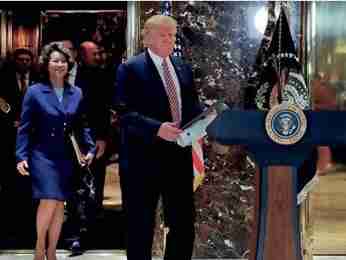 President Donald Trump gets ready to speak to the media in the lobby of Trump Tower, Tuesday, August 15, 2017 in New York.

NEW YORK – The schedule for Donald Trump’s first full day back in New York since the start of his presidency entailed walking into the Trump Tower lobby, talking about infrastructure for a few minutes, and immediately reboarding his golden elevator without taking any questions. Much to chief of staff John Kelly’s apparent chagrin, that did not happen.

Instead, Trump opted to take a few questions after his prepared remarks. The assembled reporters naturally had more questions about last weekend’s white nationalist rally in Charlottesville than they did about infrastructure bureaucracy. The result? A deluge of remarks suggesting that both sides neo-Nazis and those who protested their assembly shared the blame for Saturday’s violence equally. Trump asserted that he did not initially denounce white supremacists by name until Monday because he didn’t have all available facts until then, and pondered if pulling down a statue of Confederate general Robert E. Lee would lead to the targeting of George Washington and Thomas Jefferson next.

Creating an equivalence between a group with swastikas, lit torches, and semiautomatic weapons struck many observers as patently absurd, especially given that one of those alleged white supremacists was charged with plowing into a crowd of protesters with his car, killing one and injuring 19 others.

But a closer examination of Trump’s talking points shows that nearly every one has a direct link back to either someone the president follows on Twitter or a Fox News segment that aired after Saturday.

Trump notoriously picks up proclamations from either Twitter or his cable news habit, in which Fox News plays a significant role. That Trump’s divisive comments Tuesday appear to stem from sources with a national audience suggests that they shouldn’t have come as a complete surprise – and that the white supremacists marching through Virginia this past weekend have far more apologists than one might have assumed.

To help you get a glimpse of how Trump’s Nazi-friendly statements formed, here are his more salient points, traced to the likely source.

On waiting for all the facts.

“Bottom line: need a complete investigation into all the facts and circumstances surrounding it” —Greta Van Susteran, Aug. 13, 12:25 p.m.

Fox News said: Monday, on Fox News show The Five, cohost Jesse Watters let the president off the hook for his tepid first response: “I’m not in the President’s head, thank God. Perhaps the President was thinking, you know what? We don’t have all the facts like Dana said. Let’s just take a big picture approach. Because both sides are rumbling. I don’t know who the driver was before I make a statement. And I don’t think he was going to let the left wing violence off the hook. So, who knows what is going to happen.”

On whether George Washington will be the next tear-down target.

Donald Trump said: “Many of those people were there to protest the taking down of the statue of Robert E. Lee. So this week, it’s Robert E. Lee, I noticed that Stonewall Jackson’s coming down. I wonder, is it George Washington next week? And is it Thomas Jefferson the week after. You know, you really do have to ask yourself, where does it stop?”

NEWT GINGRICH: Where are you going to stop it? What if you weren’t sensitive enough to the Holocaust, we should take down all the statues of Franklin Delano Roosevelt? You could make an argument for that.

MARTHA MACCALLUM: You could make an argument for Thomas Jefferson or George Washington. Are you going to change the name of the Washington Monument?

On violence from the left.

Donald Trump said: “But you had many people in that group other than neo-Nazis and white nationalists, OK? And the press has treated them absolutely unfairly. Now, in the other group also, you had some fine people, but you also had troublemakers and you see them come with the black outfits and with the helmets and with the baseball bats – you had a lot of bad people in the other group too.” Trump’s Twitter timeline said:

“Media so powerful that neither Dem nor GOP will condemn left-wing violence from Antifa, who are immune from arrest or criticism.” —Ann Coulter, Aug. 14, 12:47 p.m. “Fear of ‘violent left’ preceded events in Charlottesville… http://wapo.st/2wHkoLJ” — Drudge Report, Aug. 13, 7 p.m.

Fox News said: Yesterday evening, Fox News correspondent Doug McKelway assigned equal blame to both sides, also citing baseball bats and helmets: “We saw people coming out of the park who had head wounds, who were bleeding from the head. We saw people walking into that park with bats, with sticks. You saw what they were wearing, helmets, body armor. They had come – and this pertains to both sides -they had come to do damage.”

On the ‘good’ white supremacists.

Fox News said: On Sunday, Fox News personality Pete Hegseth celebrated President Trump’s initial, vague condemnation, and offered support for white people who feel disenfranchised: “There’s a reason those people were out there. Some of it is outright racism and needs to be condemned. A lot of it, though, is, ‘I feel like my country is slipping away and just because I talk about nationalism — not white nationalism — doesn’t mean I’m talking in code that I’m a racist.’”