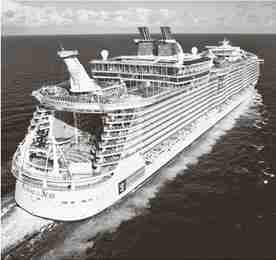 MIAMI – Royal Caribbean Cruises said Fri- day that its first-quarter profit more than doubled from the same period a year before as more people cruised on its ships and spent more money while onboard.

The company also said it now expects bet- ter earnings for the year than it previously expected. Its shares rose more than two percent in morning trading.

Earnings, adjusted for non-recurring costs and restructuring costs, came to 57 cents per share, beating Wall Street expectations. The average estimate of eight analysts surveyed by Zacks Investment Research was for earnings of 32 cents per share.

Next post Sports Authority plans to sell assets instead of closing