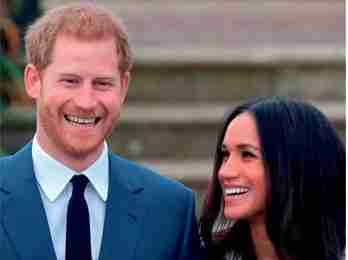 LONDON (AP) – Newly engaged Prince Harry and Meghan Markle on Monday lifted the secrecy that had shrouded their 18-month romance, revealing they met on a blind date, bonded during a camping trip under the stars in Botswana and that Harry proposed over a roast chicken dinner at their London home, getting down on one knee to pop the question.

Speaking just hours after the couple’s engagement was announced by palace officials acting on behalf of Prince Charles, Harry said he was thrilled when she said yes, and he placed an en gagement ring of his own design on her finger that included two diamonds that had belonged to his mother, Princess Diana, set alongside a large central diamond from Botswana.

“Just an amazing surprise,” said the 36-year-old Markle, an American actress known for her role in the TV legal drama “Suits.” ″It was so sweet and natural and very romantic.”

Did she hesitate? Not if Harry can be trusted.

“She didn’t even let me finish,” the 33-year-old prince said of his betrothed. “She said ‘Can I say yes, can I say yes?’ And then there were hugs and I had the ring in my finger and I was like ‘Can I, can I give you the ring?’ She goes, ‘Oh yes, the ring.’”

The couple said they plan to marry in the spring, and Harry — fifth in line for the British throne — said he hopes to start a family.

They seemed very much aglow as they sat on a sofa during their first ever joint interview and described their long-distance courtship, with Markle busy filming in Canada and Harry fulfilling royal duties in Britain.

They said they saw each other every two weeks, despite the pressure and put their relationship first.

Markle, whose mother is African American and whose father is white, said she had been “disheartened” when early press coverage about their relationship focused on her mixed-race background. But she seemed thrilled to be joining the royal family and spoke glowingly about Harry’s brother Prince William, his wife Kate and other senior royals.

They will live in Nottingham Cottage on the grounds of Kensington Palace, where Harry proposed and where they will be neighbors with William and Kate. Markle has already brought one of her rescue dogs from Canada, while the other is staying with a friend for now.

In many ways, their story mirrors those of engaged couples everywhere — with some crucial differences.

When they first went on vacation together, it was a five-day camping trip in the wilderness of Botswana — where one hopes the royal protection officers gave them some space. And when Markle met Harry’s grandmother for tea, she was sitting down with Queen Elizabeth II, the longest-reigning monarch in British history.

Markle said they managed to date for five or six months before the media found out, giving them an “amazing” amount of privacy as they got to know each other.

She said she knew very little about the royal family when a mutual friend suggested a blind date with Harry. Markle had only one question: “Is he nice?”

Their first date, for a drink, went well and they quickly decided to meet again. Harry said it took three or four weeks to persuade Markle to join him in Botswana.

For his part, Harry said he had never watched the TV show “Suits” and hadn’t heard of Markle. But when he met her, he said he quickly realized he would have to “up my game” if he was to have a chance. “Taking that huge leap of only two dates and then going effectively on holiday together in the middle of nowhere and, you know, sharing a tent together and all that kind of stuff. It was … fantastic. It was absolutely amazing to get to know her as quickly as I did,” Harry said.

The rugged red-headed prince, an army veteran whose one-time bad-boy image has been superseded by his tireless devotion to wounded veterans and his embrace of charitable causes, has said for several years that he wants to start a family, and rumors of his engagement to Markle had been flying for months, fueled by reports she was leaving her television show.

The marriage represents a first-ever blending of Hollywood glamor with the once-stuffy royal family, which has of late seemed less fixed in its ways, and brings a divorced, African-American woman into a highly visible role.

“We are very excited for Harry and Meghan,” they said in a statement. “It has been wonderful getting to know Meghan and to see how happy she and Harry are together.”

Prince Charles told reporters he was “thrilled” with the engagement. “They’ll be very happy indeed,” he said.

Monday’s announcement said the couple had informed Harry’s grandmother, the queen, whose consent is needed for him to marry. Markle described having met the queen as an amazing experience.

Archbishop of Canterbury Justin Welby said the couple would have a church wedding. No date has been announced.

Congratulations also came in from the queen and her husband, Prince Philip, and from Prime Minister Theresa May.

Markle’s parents also welcomed the news. Thomas Markle and Doria Ragland, who are divorced, said their daughter “has always been a kind and loving person. To see her union with Harry, who shares the same qualities, is a source of great joy for us as parents.”

Markle was raised in the Los Angeles area. Her father is a Hollywood lighting director, her mother a yoga instructor and psychotherapist.

It won’t be the first time that a British royal has married an American, or a divorced person. In 1936, Edward VIII famously abdicated after he was forced to choose between the monarchy and his relationship with twice-divorced American socialite Wallis Simpson.