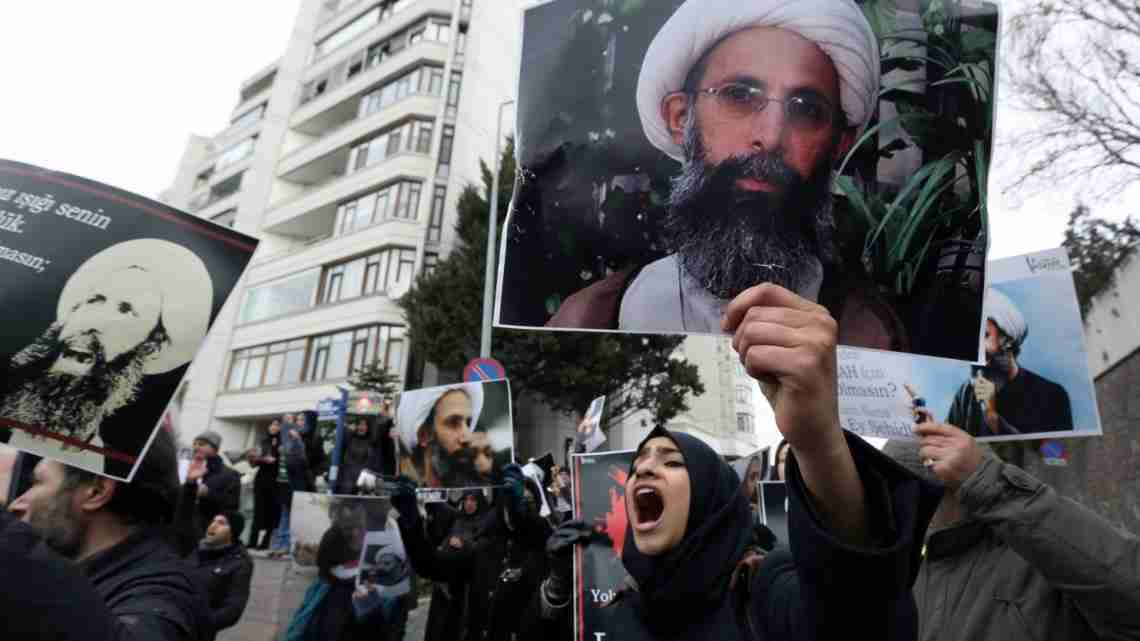 The move came hours after demonstrators stormed and set fire to the Saudi Embassy in Tehran in protest over the death of Sheikh Nimr al-Nimr. Saudi Foreign Minister Adel al-Jubeir said Iranian diplomatic personnel had 48 hours to leave his country and all Saudi diplomatic personnel in Iran had been recalled home.

The mass execution of al-Nimr and 46 others – the largest carried out by Saudi Arabia in three and a half decades – has laid bare the divisions gripping the Middle East, where demonstrators took to the streets from Bahrain to Pakistan in protest over the outspoken cleric’s death.

It also illustrates the kingdom’s new aggressiveness under King Salman. During his reign, Saudi Arabia has led a coalition fighting Shiite rebels in Yemen and staunchly opposed regional Shiite power Iran, even as Tehran struck a nuclear deal with world powers.

Iran’s top leader warned Saudi Arabia on Sunday of “divine revenge” over al-Nimr’s death, while Riyadh accused Tehran of supporting “terrorism” in an escalating war of words that threatened to intensify even as the U.S. and the European Union sought to calm the region.

Al-Nimr was a central figure in Arab Spring-inspired protests by Saudi Arabia’s Shiite minority until his arrest in 2012. He was convicted of terrorism charges but denied advocating violence.

On Saturday, Saudi Arabia put al-Nimr and three other Shiite dissidents to death, along with a number of al-Qaida militants. Al-Nimr’s execution drew protests from Shiites around the world, who backed his call for reform and wider political freedom for their sect.

While the split between Sunnis and Shiites dates back to the early days of Islam and disagreements over the successor to Prophet Muhammad, those divisions have only grown as they intertwine with regional politics, with both Iran and Saudi Arabia vying to be the Mideast’s top power.

Iran accuses Saudi Arabia of supporting terrorism in part because it backs Syrian rebel groups fighting to oust its embattled ally, President Bashar Assad. Riyadh points to Iran’s backing of the Lebanese Hezbollah and other Shiite militant groups in the region as a sign of its support for terrorism. Iran also has backed Shiite rebels in Yemen known as Houthis.

Iran’s supreme leader, Ayatollah Ali Khamenei, condemned al-Nimr’s execution, saying Sunday the cleric “neither invited people to take up arms nor hatched covert plots. The only thing he did was public criticism.”

Iran’s powerful Revolutionary Guard said Saudi Arabia’s “medieval act of savagery would lead to the “downfall” of the country’s monarchy.

Saudi Arabia’s Foreign Ministry said that by condemning the execution, Iran had “revealed its true face represented in support for terrorism.”

In Tehran, a protest outside the Saudi Embassy early Sunday quickly grew violent as protesters threw stones and gasoline bombs at the embassy, setting part of the building ablaze, according to Gen. Hossein Sajedinia, the country’s top police official, the semi-official Tasnim news agency reported.

Forty people were arrested and investigators were pursuing other suspects, Tehran prosecutor Abbas Jafari Dowlatabadi said, according to the semi-official ISNA news agency.

“It is unjustifiable,” he said in a statement.

Hundreds of protesters later demonstrated in front of the embassy and in a central Tehran square, where street signs near the embassy were replaced with ones bearing the slain sheikh’s name.

The disruption in relations between Saudi Arabia and Iran may have implications for peace efforts in Syria. U.S. Secretary of State John Kerry and others spent significant time trying to bring the countries to the negotiating table and they both sat together at talks aimed at finding a diplomatic solution to the civil war. Last month, Saudi Arabia convened a meeting of Syrian opposition figures that was designed to create a delegation to attend peace talks with the Syrian government that are supposed to begin in mid-January.

Across the region, demonstrators took to the streets in protest over the execution of al-Nimr.

In Bahrain, police fired tear gas and birdshot at demonstrators on Sitra Island, south of the capital, Manama, wounding some. In al-Daih, west of the capital, Shiite protesters chanted against Saudi Arabia’s ruling Al Saud family, as well as against Bahrain’s ruling Al Khalifa family.

In Beirut, Hezbollah leader Hassan Nasrallah called al-Nimr “the martyr, the holy warrior,” while protests erupted from Turkey to India to Pakistan.

Western powers sought to calm the tensions. In Washington, State Department spokeswoman Elizabeth Trudeau said the U.S. condemned the embassy attack and called on all sides “to avoid any actions that would further heighten tensions in the region.”

European Union foreign policy chief Federica Mogherini spoke to Iranian Foreign Minister Mohammad Javad Zarif by phone and urged Tehran to “defuse the tensions and protect the Saudi diplomats,” according to a statement.

The cleric’s execution has threatened to complicate Saudi Arabia’s relationship with the Shiite-led government in Iraq, where the Saudi Embassy is preparing to formally reopen for the first time in nearly 25 years. On Saturday there were calls for the embassy to be shut down again.

Iran and Saudi Arabia summoned each other’s envoys for consultations, and Saudi allies Egypt and the United Arab Emirates summoned Iranian officials in their capitals over the Tehran embassy assault.

Meanwhile, al-Nimr’s family prepared for three days of mourning at a mosque in al-Awamiya in the kingdom’s al-Qatif region in predominantly Shiite eastern Saudi Arabia. The sheikh’s brother, Mohammed al-Nimr, told The Associated Press that Saudi officials informed his family that the cleric had been buried in an undisclosed cemetery, a development that could lead to further protests.