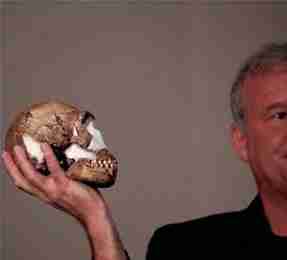 JOHANNESBURG (AP) A species belonging to the human family tree whose remnants were first discovered in a South African cave in 2013 lived several hundred thousand years ago, indicating that the creature was alive at the same time as early humans in Africa, scientists said Tuesday.

A meticulous dating process showed that Homo naledi (nah-LEHdee), which had a mix of human-like and more primitive characteristics such as a small brain, existed in a surprisingly recent period paleontological in terms, said Lee Berger of Wits University in Johannesburg. Berger led the team of researchers, which also announced that it had found a second cave with more fossils of the Homo naledi species, including a relatively well-preserved skull of an adult male.

The conclusion that Homo naledi was living between 236,000 and 335,000 years ago – and had not become extinct much earlier shows that the human “Homo” family tree was more diverse than previously thought at that point in the evolution of our species, Homo sapiens, said John Hawks of the University of Wisconsin-Madison and Wits University.

The next step in research is to “sort the relationship of these different species to each other and also their role in our process of becoming human,” Hawks said during an announcement of the discoveries at the Cradle of Humankind, a site near the South African town of Magaliesburg where the fossils were found. The research was also published in the journal “eLife.”

The name of Homo naledi refers to the “Homo” evolutionary group, which includes modern people and our closest extinct relatives, and the word for “star” in the local Sotho language. The fossils were found in the Rising Star cave system, which includes more than 2 kilometers (1.25 miles) of underground, mapped passageways. The second chamber containing the more recent fossil discoveries is more than 100 meters (330 feet) from the cave where the original discoveries were made, and publicly announced in 2015.

Some experts who were not involved in the research also marveled at the age of the fossils, determined by dating Homo naledi teeth and cave sediments.

“This is astonishingly young for a species that still displays primitive characteristics found in fossils about 2 million years old, such as the small brain size, curved fingers, and form of the shoulder, trunk and hip joint. Yet the wrist, hands, legs and feet look more like those of Neanderthals and modern humans, and the teeth are relatively small and simple, and set in lightly built jawbones,” Chris Stringer of the Natural History Museum in London wrote in an email to The Associated Press.

Stringer said there were parallels with the late survival of the species Homo floresiensis – also known as the “hobbit” – in apparent isolation on an island in what is today Indonesia, and raised a key question: “How did a comparably strange and small-brained species linger on in southern Africa, seemingly alongside more ‘advanced’ humans?”

Richard Potts of the Smithsonian Institution’s National Museum of Natural History in Washington said it was likely that Homo naledi evolved and persisted in isolation from other species of Homo.

”Island habitats’” can occur on continents, too, in small environmental refuges that are sustained long term,” Potts said. “Yes, on continents it’s typically lizards, butterflies, fish, and small mammals that are susceptible to separation and isolated evolution, and the effects of that isolation can arise rapidly. To me, naledi and floresiensis are nature’s experiments of isolated evolution in two of our evolutionary cousins.”

Berger, the research team leader, said the discovery of a second chamber with Homo naledi remains gives more credence to the idea that the species deliberately disposed of its dead in pitch-black caves that are extremely difficult to reach. However, some experts who were not on the research team questioned whether the small-brained species was capable of such behavior and speculated that other ways to access the chambers may have existed in the past.

So far, there is no evidence that Homo naledi used stone tools or harnessed fire for its own uses.

“This research shows that we come from common roots, that we represent a common humanity,” Habib said. “If we’re going to survive as a species, that’s what we need to remember.”

Next post Prosecutor: Governor changed his view on meddling in cases

Previous post US digs for evidence of Haiti immigrant crimes