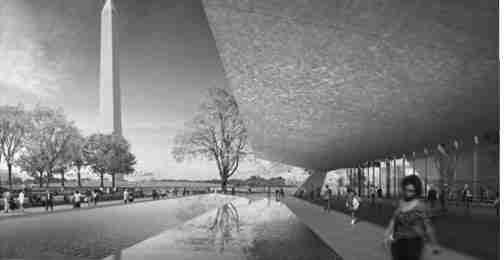 WASHINGTON (AP) – In its first year, the Smithsonian’s new black museum has become the nation’s top temple to blackness, an Afrocentric shrine on the National Mall where people of all races, colors and creed are flocking to experience and leave behind for posterity the highs and lows of African American life in the United States.

“This has become more than a museum. This has become a pilgrimage site,” said Lonnie Bunch, founding director of the Smithsonian National Museum of African American History and Culture, in an interview with The Associated Press.

The nation’s first black president, Barack Obama, opened the new Smithsonian to a standing room-only crowd on Sept. 24, 2016, with the ringing of a church bell. Since then, the Smithsonian’s 19th – and so far, most popular museum has only become more beloved.

Free advance timed tickets sell out months in advance and people line up outside the doors every morning in hopes of snagging rare same-day passes.

To celebrate the one-year anniversary, the museum extended its hours this weekend so more people could get inside to see exhibits designed to take visitors through African-American history in this country: from slavery, on the lower level, to a reproduction of Oprah Winfrey’s television set upstairs and artifacts from Obama’s first presidential campaign.

Ground for the $540 million museum was broken in 2012 on a 5-acre tract near the Washington Monument. Construction was completed in 2016. Millions of donors contributed $315 million in private funds ahead of the opening.

Nearly 3 million people have visited in the first year to see exhibits ranging from the glass-topped casket used to bury lynching victim Emmett Till to a fedora owned by late pop superstar Michael Jackson and a slave cabin from Edisto Island, South Carolina.”We expected 4,000 people a day,” Bunch said.

The museum and its exhibits are still changing and evolving. For example, some conservatives complained there was originally no mention of the Supreme Court’s second African-American justice, Clarence Thomas, anywhere in the museum. There is now, in a new Supreme Court exhibit, Bunch said.

And they’re still collecting and evaluating artifacts from around the country for inclusion in the museum, from slavery artifacts to items from the recent Black Lives Matter movement. And people are always willing to give, Bunch said.

Much of the material inside the museum comes from inside people’s homes and personal collections. Actress Pam Grier told the AP in an interview that she had several pieces of her movie wardrobe from her extensive career that she planned to donate to the museum soon. Bunch, when told, immediately started making plans to contact Grier.

But just as important as the exhibits are the emotions and the memories the museum evokes, Bunch said. Wandering through the museum, he can often see grandmothers explaining the Jim Crows South to children, and fathers and sons talking about the joys and horrors of growing up in a segregated United States.

“Because you have these collections, it allows people to open up to share stories to find memories. I’ve heard many times people say, `I forgot, but once I saw a segregated door or once I saw that washboard it brought back those memories,”’ Bunch said. “So what we wanted has happened. This museum has humanized history.”

Unlike other museums, the museum wants people to leave something behind when they visit through a feature they call Visitor Voices, where museum attendees can talk about their feeling about the museum and about life as an African-American in the United States.

John Frazier, 76, of Durham, North Carolina, recorded his memories of protesting and being beaten in Winona, Mississippi, in 1960 while trying to integrate a bus station. “I was brutally beaten and yanked off the bus, stripped naked, brutally beaten again, and with whiskey poured all over my naked body,” said Frazier, former president of the NAACP Mississippi Youth Council in the 1960s.

Taylor Pearson of Baltimore, in her video, talked about her discovering her racial identity in prekindergarten. Classmates refused to let her play a princess game because, as Pearson said she was told,”There’s no such thing as a black princess.”

Now there is a major black history museum will help other little black and brown girls, Pearson said. “This museum is kind of like a homecoming … It gives me a feeling like I have a place here and that in being black you can be beautiful too.”