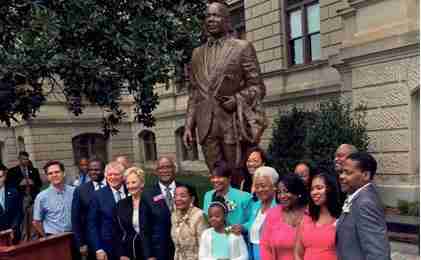 PHOTO COURTESY OF THE JAPAN TIMES

ATLANTA (AP) – The daughter of civil rights leader Martin Luther King Jr. stood beside her father’s newly unveiled statue Monday, just a few blocks from where he grew up, handing out hugs and telling each well-wisher: “It’s about time.”

The statue paying tribute to King made its public debut Monday on the Georgia Capitol grounds in front of around 800 people including Gov. Nathan Deal, many other state political leaders and several members of the King family. The sculpture’s installation comes more than three years after Georgia lawmakers endorsed the project.

“Forty-nine years ago when my father was assassinated, he was the most hated man in America. Today, he is one of the most loved men in the world,” the Rev. Bernice King said of her father, who was slain in 1968 in Memphis, Tennessee.

A replica of the nation’s Liberty Bell tolled three times before the 8-foot (2.4-meter) bronze statue was unveiled on the 54th anniversary of King’s “I have a dream” speech at the 1963 March on Washington. The sculpture depicts King in mid-stride, as his left arm holds an overcoat while grasping a batch of papers.

“Today, we as the sons and daughters of former slaves and former slave owners are here to witness the unveiling of that statue,” Bernice King said. “It is a glorious and grand day in the state of Georgia and in the United States of America and all over the world.”

King’s statue was erected in his Southern hometown at a time when monuments honoring Civil War Confederates are coming down in many other places across the South.

Bernice King said she hopes the erection of her father’s statue can now spark conversations about the impact of monuments in public spaces.

“This statue being unveiled today, I believe, also provides a sense of hope to a nation that is in turmoil once again, as many people around this nation are removing and taking down Confederate monuments,” she said.

Other statues on the Capitol grounds include Confederate Gen. John B. Gordon and segregationists Sen. Richard Russell and Gov. Eugene Talmadge.

Bringing King’s statue into reality took multiple struggles. Officials had to negotiate with King’s family for the right to use his image. Then an artist was selected for the project, only to be killed in a motorcycle accident. After a lengthy screening, sculptor Martin Dawe was chosen to replace him.

Dawe said he knew other tributes to King had been criticized and he set one goal: Make the statue look like the man.

“This feels right,” said Dawe while looking up at the statue. “I’m in awe of this.”

Democratic state Rep. Calvin Smyre, who sponsored the bill to place the statue of King on Capitol grounds, believes the statue will be “inspiring and give hope to generations to come.”

“This tribute is important and a lasting statement about the value of inclusion, the strength of our diversity and the power of grace and how it changes hearts,” Atlanta Mayor Kasim Reed said. “This statue comes at a time when there are many conversations about historical monuments going on nationally and within the state. When the time comes, I’m confident in the city of Atlanta that we will walk it together as we have again, again and again.”

Reed said $40 million is being invested to redevelop the Martin Luther King Jr. drive corridor to improve mobility and safety. The mayor also said a $23 million MLK Recreation and Aquatic Center will be opened in Atlanta by the end of the year.