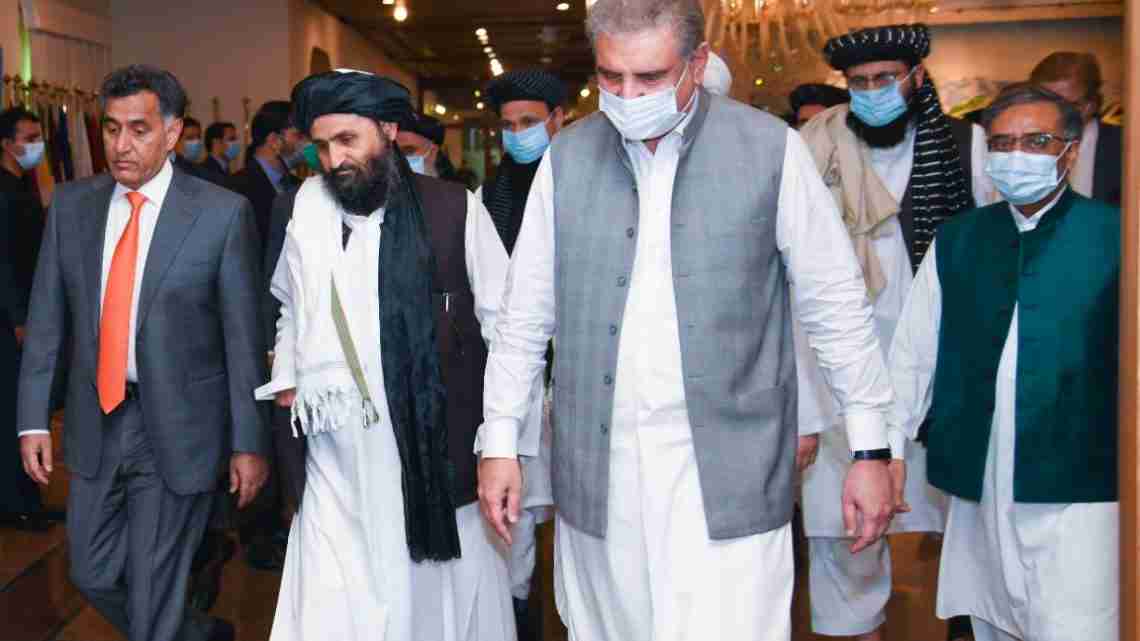 An Afghan Taliban delegation is in Islamabad at the invitation of Pakistan’s foreign office to discuss the Afghan peace process, arriving just days after the country imposed sanctions on the group’s leadership, including travel restrictions.

Pakistan issued the sanctions order on Aug. 18 but only made it public on Aug. 21. The orders identified dozens of individuals, including Baradar and several members of the Haqqani family, identified by the U.S.government as part of a Sunni Islamist militant organization, including Sirajuddin Haqqani, the current head of the organization and the deputy head of the Taliban, among others.

Despite the order preventing their entry into or transit through the country, the Taliban group arrived on Aug. 24.

“Officials of the Islamic Emirate routinely pay visits to regional nations and other countries of the world as part of our political strategy to convey our views about the peace process,” Taliban political spokesman Suhail Shaheen said in a series of posts on Twitter.

1/4
Today, a high-level delegation led by Mullah Abdul Ghani Baradar, Political Deputy-Amir, IEA and Director of the Political Office, left for Pakistan at the invitation of Pakistan’s Foreign Ministry.
The delegation will hold talks with senior Pakistani officials

“These are not new sanctions; they were slapped on a number of members of the Islamic Emirate previously,” he said. “But we are now entering into intra-Afghan negotiations. There is a need for travel. These embargoes or sanctions will hamper the peace process.”

The sanctions are part of Islamabad’s efforts to avoid being put on the blacklist by the Financial Action Task Force, a Paris-based intergovernmental organization that develops policies to fight money laundering and terror financing.

Pakistan has taken several measures such as amending laws to resolve “structural deficiencies” in its anti-money laundering policies and has combated financing of terrorism.

Afghan affairs expert Rahimullah Yousufzai, an award-winning journalist, told Zenger News that not too much should be read into the sanctions.

“These have more to do with commitments to the FATF,” he said, referring to the task force. “It also puts pressure on the Taliban leadership to fast-track the Afghan peace process. The importance of these talks in Islamabad can be gauged from the fact that Mulla Baradar is leading the team.”

Pakistan was placed on the gray list by the task force last year. It also was on the list in 2008, and again from 2012 to 2015. Other countries on the list are Ethiopia, Serbia, Sri Lanka, Syria, Trinidad and Tobago, Tunisia and Yemen.

Not only the handling of the Taliban, but also several other points in Pakistan’s recent statements to the task forc point to important developments in the terrorism and conflict landscape of the region. Among them, Indian experts said Pakistan’s listing terror suspect Dawood Ibrahim’s details in its sanctions order was a significant development.

Indian authorities claim that Ibrahim has been granted refuge by Pakistan in Karachi. India has sought his extradition since the 1992 bomb blasts in Mumbai that killed 257 people and injured 1,400. Pakistan has always denied that Ibrahim lives in the country.

This is the first time that the Pakistani government has published details of all those who are on the United Nations’ proscribed list, including Ibrahim. It has also listed Ibrahim’s properties in Karachi.

“This is important because the Pakistanis do not seem to have approached the UN committee concerned for deletion of his (Ibrahim’s) name or modification of the contents relating to his Pakistani passports and his addresses in the country,” said Vivek Katju, a former diplomat who served as a secretary in India’s ministry of external affairs. “This is tantamount to an admission of Dawood Ibrahim’s presence in Pakistan.”

“They are trying to impress the FATF to get off the gray list and not be pushed to the blacklist,” said Tilak Devasher, a member of India’s National Security Advisory Board, and an expert on Pakistan.

Pakistan also passed a series of laws, including amendments to the anti-terror law, to become compliant with the task force’s guidelines. Pakistan’s performance on the task force action plan will come up for review in September.

“This is just meant to fool the FATF—there has been no action against these individuals in the past,” Devasher said.

Many of the Taliban leaders have lived in Pakistan since the Soviet Union invaded Afghanistan in 1979 when they were allies of the United States in the war in Afghanistan. The U.S. and Afghanistan have accused Islamabad of giving the Taliban a haven, but Pakistan has denied it.

The U.S. signed a peace deal with the Taliban on Feb. 29 to end the country’s nearly 20 years of military engagement in Afghanistan. But delays in a prisoner release program hindered the start of talks between Kabul and the Taliban.

Previous post Starting at a Black Newspaper, Dana White Is the First Black Woman to Run Comms at a Major Automaker