The KKK attacked her family; Now she’s writing to a Neo-Nazi 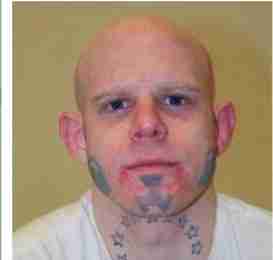 Sean Gillespie is a former neo-Nazi serving a 39-year sentence for firebombing an Oklahoma City synagogue.

FAIRFAX, Va. – On the first day of class, on one of the country’s most diverse college campuses, the assignment came as something of a shock.

Write to a former neoNazi who had firebombed a synagogue, the instructor told his students at George Mason University.

Near the front of the class, Stacy Nelson stirred in her seat.

The African American senior had been hesitant to take a course on hate crimes when the subject seemed all too real. At the time, the country was nearing the end of a divisive and racially charged presidential election campaign. The alt-right, with its call for a form of American apartheid, was on the rise. So were reports of hate crimes.

The teacher, Kevin Fornshill, a former U.S. Park Police detective, saw the assignment as an experiment.

Could students studying hate crimes learn from someone who had actually committed one?

Sean Gillespie had been incarcerated at a high-security prison in Colorado for more than a decade, including eight years in solitary confinement. His face was covered in racist tattoos that he now longed to have removed.

At 21, Nelson was the same age that Gillespie had been when he went to prison. She’d grown up in Richmond, the capital of the Confederacy. Decades earlier, her grandparents had been attacked by the Ku Klux Klan – a frightening incident that her grandma had never forgotten or forgiven.

Now the criminal justice major wondered what to write to a man who had tried to ignite a “racial holy war,” a man who’d boasted of attacking black people with a baseball bat.

The molotov cocktail did little more than scorch the synagogue’s brick exterior, but the April 1, 2004, attack shook the congregation at Temple B’nai Israel in Oklahoma City.

It had been nine years since a powerful truck bomb driven into position by Timothy McVeigh had devastated the Alfred P. Murrah Federal Building downtown, killing 168.

Now extremism had returned. Some panicked families pulled their children out of the synagogue’s preschool.

Two weeks later, a tip led the FBI to a Burger King in Russellville, Ark., and to a paleskinned employee with a shaved head named Sean Gillespie.

He’d been a member of the Aryan Nations, a white-supremacist group headquartered in rural Idaho. When the compound was closed in 2001, he joined the Army. After his views got him discharged, Gillespie embarked on a hate-fueled cross-country crime tour that included a stop in Oklahoma City.

Before FBI agents could read him his rights, Gillespie told them they could search his pickup truck. Inside, they found a video camera that contained a recording of Gillespie, staring into the camera as he sat in the truck near the synagogue.

“I am going to firebomb it with a molotov cocktail,” he said in the video. “I will film it for your viewing enjoyment, my kindred. White power.”

“Damn, I thought I had erased that,” Gillespie said when confronted with the video, an agent later testified.

Gillespie confessed. The plan had been to firebomb a Jewish person’s house, he said. He had found a Jewish-sounding name in the phone book but had gotten lost on his way to the address and attacked the synagogue instead.

He wrote a letter of apology to the synagogue from his jail cell. But Gillespie also bragged about his crimes in phone calls, ending conversations by saying “88,” white-supremacist code for “Heil Hitler.” (H is the eighth letter of the alphabet.)

Doubting Gillespie’s remorse, federal prosecutors refused to offer him a plea agreement, according to his public defender, Tony Lacy. They charged Gillespie with using a destructive device during a crime of violence – which carried a minimum sentence of 30 years – and two lesser crimes. A jury convicted him on all counts.

While awaiting sentencing, Gillespie wrote a second letter to the synagogue.

“To the Zionist scum,” it began. “This letter is to thank you for the lies and your testimony against me.” At the end of the letter, next to a swastika, he wrote “six million more” – a reference to the Jews killed in the Holocaust.

Some of the most moving testimony came from Barry Cohen, the rabbi at Temple B’nai Israel, who called for Gillespie to receive counseling away from the influence of other racists.

“I can only ask what kind of person Mr. Gillespie is going to be when his prison term is concluded,” Cohen said. “Will he have hatred that is honed by decades of neo-Nazi affiliation, indoctrination, or will he be ready to return to society?”

Before he was led out of the courtroom, Gillespie raised an arm in a Nazi salute.

The students were white and black, Asian and Hispanic, Muslim and Hindu, gay and straight. All had had their own encounters with hatred and their own questions for Gillespie.

A Boston Marathon bombing survivor wanted to know the origin of Gillespie’s extremism.

A Latina, writing the day after the election, wondered whether a goal of racial harmony was realistic.

Nelson’s letter began with her family’s story. One night in the 1950s, she wrote, her grandparents were on a date when they were attacked by the Ku Klux Klan.

”My grandpa had to fight the group of guys trying to rape my grandmother,” she wrote. “He got beat up pretty bad but luckily he was able to scare them off. Otherwise, I wouldn’t be here today.”

The incident had turned her grandmother against whites, Nelson said.

“I think it’s sad that my grandma has put herself in a little box, separated from the rest of the world,” she wrote.

“I too have had things in my past that were traumatic enough to cause me to hate others,” he wrote.

After his trial, Gillespie remained an avid neo-Nazi. White supremacists across the country considered him a prisoner of war and sent him letters of support and gifts. He accrued racist tattoos including a Nazi symbol on his chin and black Doc Martens boots a skinhead calling card on each side of his face, like mutton chop sideburns.

Everything changed in 2008, when Gillespie was put in solitary confinement for stabbing another inmate, he told Nelson.

“It was there that I changed my views on race,” he wrote. “I started to question my past and realized that I did not like what I had become.”

After three years of being surrounded by white supremacists, the isolation was liberating. In therapy, he traced the roots of his racism to sex abuse he had suffered at the hands of an Asian babysitter. Stuck in his cell for 23 hours a day, Gillespie pushed himself to change.

“I used to hate seeing inter-racial relationships on T.V.,” he wrote. “I would cuss my television or change the channel. So I forced myself to watch this.”

He also began to read books by black authors. In fact, he told Nelson, he had just finished “Stride Toward Freedom,” the Rev. Martin Luther King Jr.’s memoir of the Montgomery bus boycott.

“So I can just imagine the traumatic atmosphere that your grandmother experienced,” he wrote.

Nelson had told Gillespie that she’d “never really faced any kind of real racism growing up,” aside from an elementary teacher telling her she was “a credit to my race.” But Gillespie disagreed.

“To me, what your teacher said is REAL racism,” he said. “I am sorry this happened to you.”

Of all of Nelson’s questions, there was only one Gillespie had difficulty answering: Was he happy?

Solitary confinement had helped him change, he replied, but also left him deeply depressed.

“I have attempted suicide several times over the last few years and just a few months ago cut an artery on my arm, losing 2 pints of blood,” he wrote. “So I struggle with happiness. Prison can drain all the reserves you have.”

Writing to students was one of the few reasons he had to live, Gillespie said.

“It does give me a sense of happiness that I am no longer full of senseless hate,” he wrote.

Nelson couldn’t read the letter straight through. It took her two days to finish it.

“It’s weird to find yourself identifying with someone who once had so much hostility toward people who look like you,” she told The Washington Post.

Other students had similar experiences. One hesitated to write to Gillespie out of fear that he would come after her, only to end up convinced he had changed.

“Sean won a lot of people over,” Fornshill said.

That includes Temple B’nai Israel. In 2014, after several letters of apology from Gillespie, the synagogue forgave him for the firebomb attack.

“Our faith teaches that a person can make teshuvah, a turning towards righteous behavior,” Rabbi Vered Harris wrote. “I pray that your path of teshuvah allows you to live a life of peaceful purpose.”

Gillespie cited the synagogue’s forgiveness when, in 2014, he asked President Barack Obama to commute his sentence to 20 years.

The request is still pending, now before President Trump.

He has also asked the Bureau of Prisons for permission to have his face tattoos removed, but the request has so far been denied.

Fornshill plans to have his class write to Gillespie again this fall as much for the inmate’s sake as for that of his students.

“He needs, I don’t want to say a lifeline, but a purpose day-to-day,” Fornshill said. “Corresponding with students means a lot to him.”

The letters also mean a lot to Fornshill. The former detective and the former neo-Nazi have struck up a friendship, exchanging movie and book reviews.

But Fornshill, who sends Gillespie postcards from family vacations, worries for Gillespie’s safety. Gillespie is now out of solitary confinement. Any day now, he could be put back into circulation with the white supremacists he has denounced.

“One of the white gangs in here is passing out wanted posters with my face on it,” Gillespie said during a recent call from prison. But he said he has no regrets about renouncing his racism.

“Man’s goodness is a flame that can be hidden but never extinguished,” he said, quoting Nelson Mandela. “I did some terrible things, but now I’m trying to let that goodness shine.”