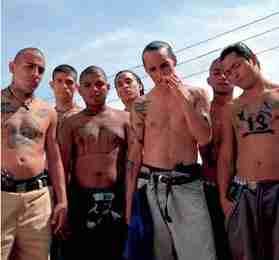 Members of the MS-13 street gang from suburban New York.

WASHINGTON – The Trump administration vowed Tuesday to crack down on MS-13, a notoriously brutal Central American street gang blamed for a recent series of killings in suburban New York, and accused Obama-era border policies of allowing its ranks to flourish.

The gang is known for hacking and stabbing victims with machetes, drug dealing, prostitution and other rackets. Their recruits are middle and high-school students predominantly in immigrant communities and those who try to leave risk violent retribution, according to officials.

“These organizations enrich themselves by pedaling poison in our communities, trafficking children for sexual exploitation and inflicting horrific violence in the communities where they operate,” Attorney General Jeff Sessions said in remarks before meeting with top federal law enforcement officials on ways to dismantle ultraviolent transnational gangs.

His warnings were echoed in a separate address by Homeland Security Secretary John Kelly and came just hours after President Donald Trump tweeted that “The weak illegal immigration policies of the Obama Admin. allowed bad MS-13 gangs to form in cities across U.S. We are removing them fast!”
MS-13 – or the Mara Salvatrucha – traces its origins to Los Angeles, where thousands fleeing El Salvador’s bloody civil war in the 1980s arrived, to protect the immigrants from Mexican and African American gangs. As Central American communities have grown, so has the gang, which is now estimated at 30,000 members operating in semi-autonomous cliques mostly in Central and North America. More than 10,000 MS-13 are in the U.S., according to federal law enforcement officials. However, the FBI doesn’t break down its national crime statistics by gang affiliation, and the bureau doesn’t collect MS-13-specific data, a spokeswoman said.

The Justice Department suspects major gang leaders are using cellphones from Salvadoran prisons to instruct members who have crossed into the U.S. illegally to kill rivals and extort legal and illegal businesses owned by immigrants. Authorities suspect members of the gang are behind last week’s slayings in central Long Island of four young people, which are among 11 killings that have rattled the working-class immigrants of Central Islip, New York, since September.
Sessions has called for more aggressive prosecution of crimes such as illegal border crossing and smuggling others into the U.S. as a way to deter violence.

“We cannot allow this to continue. We will secure our border, expand immigration enforcement, and choke-off supply lines. If you are a gang member: We will find you,” said Sessions, who also alleged that so-called sanctuary cities, which limit local cooperation with immigration authorities, undermine law enforcement efforts to stop such gangs.

The president later tweeted that “Sessions is doing a fantastic job: announced today new steps to dismantle violent gangs like MS-13. I promised to get tough and we are!”
Kelly, during a separate speech at George Washington University, said transnational criminal groups, such as the drug cartels and MS-13, are engaged in kidnapping, torture and human trafficking and pose one of the greatest threats to the U.S. “They are utterly without laws, conscience or respect for human life,” he said.

During the Obama administration, the government focused on immigrants in the country illegally who posed a threat to national security or public safety and recent border crossers. More than 2.5 million people were deported under Obama’s policies, many of them characterized as suspected or confirmed gang members.

The Obama administration made unprecedented efforts to fight MS-13, targeting the gang’s finances by declaring it an international criminal group subject to sanctions by the Treasury Department. The goal of that 2012 maneuver was to stymie the gang’s ability to funnel money back to leaders in El Salvador or launder criminal proceeds through otherwise legitimate businesses.

Federal prosecutors have targeted MS-13 before, pursuing racketeering cases throughout the 2000s in places such as San Francisco, Maryland, northern Virginia; Charlotte, North Carolina; and elsewhere. The Justice Department said it made progress in 2009 and 2010. The FBI last week added an MS-13 member to its Ten Most Wanted Fugitives list for his suspected role in the 2011 killing of a man with a baseball bat and a screwdriver.

But James Trusty, who headed the department’s organized crime and gang section before he left in January, said the group appeared to be experiencing a recent revival in some of those same places.

Stricter vetting at the border is necessary to stop MS-13 members from coming into the U.S., Trusty said, noting some are coached to tell immigration officials they’re escaping violence in their home country in order to stay.

“My own view is there has to be some correlation between lax immigration policies and replenishment of the gangs in places where they already existed,” he said.

Next post Is this the future of college: Online classes, but no degree