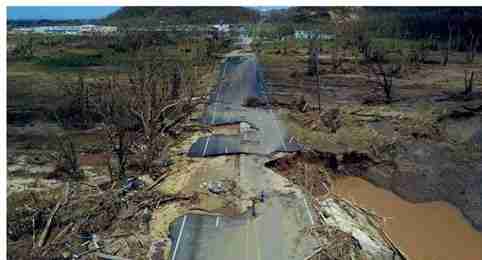 A man rides his bicycle through a damaged road in Toa Alta, west of San Juan.

SAN JUAN, Puerto Rico (AP) – President Donald Trump highlighted Puerto Rico’s relatively low death toll compared with “a real catastrophe like Katrina” as he opened a tour of the island’s devastation Tuesday, focusing on the best of the reviews he and his administration are getting rather than criticism of the federal response to Hurricane Maria.

Trump pledged an all-out effort to help the island but added: “Now I hate to tell you, Puerto Rico, but you’ve thrown our budget a little out of whack because we’ve spent a lot of money on Puerto Rico. And that’s fine. We’ve saved a lot of lives.”

He said his visit was “not about me” but then praised local officials for offering kind words about the recovery effort and invited one to repeat the “nice things” she’d said earlier. Trump also singled out Gov. Ricardo Rossello for “giving us the highest praise.”

In Washington, Rep. Luis Gutierrez, DIll., noted that many people in more remote areas are still in dire straits and in need of food and water. He told CNN, “Let’s stop talking about the death count until this is over.” It stands at 16 now, and 95 percent of electricity customers remain without power, including some hospitals.

The most prominent critic in Puerto Rico, San Juan Mayor Carmen Yulin Cruz, attended Trump’s first event, in an airport hangar, shaking Trump’s hand as he went around a table greeting officials before sitting in in the shadow of a hulking, gray military plane.

“How are you?” he asked. Her response could not be heard. He thanked her. Days earlier, Cruz said the Trump administration was “killing us with the inefficiency,” pleading for more effective federal leadership in the crisis.

Air Force One brought the president, first lady Melania Trump and aides to Puerto Rico in late morning. They were expected to spend more than five hours on the ground, meeting first responders, local officials and some of the 3.4 million people whose lives have been upended by a hurricane that, in the president’s words, left the island U.S. territory “flattened.”

At least parts of the itinerary were drawn to ensure a friendly reception: Trump was visiting the houses of pre-selected families waiting on their lawns.

The president also handed out flashlights at a church, where 200 people cheered his arrival and crowded around him getting pictures on their cellphones.

Asked by AP what he has to say to people still without power, food and water, he spoke of the generators brought to the island and said the electrical grid is being fixed.

“Again the job that’s been done here is really nothing short of a miracle,” he said.

In the Playita neighborhood in the heart of San Juan, a few miles from the air base where Trump gave his upbeat report on progress, people cleaned sewer water from their homes and businesses, stacked fouled clothes in shopping carts and piled them on street corners alongside wet mattresses and pieces of broken metal roofs.

They still lack power, got water back Sunday and said they have seen no federal officials since Maria struck.

“What more do they want us to do?” asked Ray Negron, 38, resting in the shade of a church after a morning collecting debris. “Nobody’s come.”

On approach to the airport, Air Force One descended over a landscape marked by mangled palm trees, metal debris strewn near homes and patches of stripped trees, yet with less devastation evident than farther from San Juan.

At least in his first moments on the island, Trump remained focused primarily on drawing praise. “He didn’t play politics at all,” he said of the governor, making clear that he considers those who have criticized him to be politically driven. Trump misstated Maria as a Category 5 hurricane; it was Category 4 when it hit Puerto Rico.

Next post Olynyk makes a big splash in Heat scrimmage