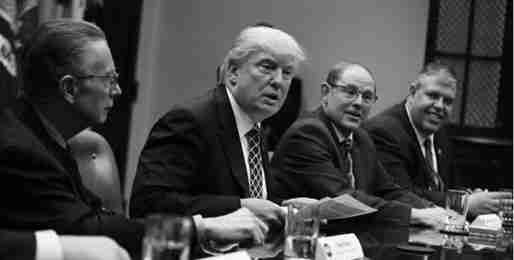 WASHINGTON – The booming Washington region has long been an easy target for Republican lawmakers who want to cut federal spending. Last year, a GOP congressman from Iowa tweeted a picture of construction cranes on the waterfront south of the Capitol with the comment, “D.C. needs a recession.”

In the unlikely event that Congress approves President Donald Trump’s budget proposal, Washington could get one.

Trump has proposed deep spending cuts at nearly every federal agency other than the Defense Department and eliminating 19 independent agencies altogether. Although his budget has little chance of being enacted, it offers a glimpse into the priorities of Trump and his advisers, in cluding chief strategist Steve Bannon, who has pledged the “deconstruction of the administrative state.”

While many of the targeted federal agencies have offices outside Washington, Trump’s dream budget would hit the region disproportionately, with tens of thousands of jobs at risk. The cuts would be felt throughout the city, with fewer people riding the already-beleaguered Metro subway or eating at restaurants. It would also hurt Washington’s already-shaky market for office space.

Economist Stephen Fuller of George Mason University, who has studied the regional economy for decades, estimated 20,000-24,000 federal employees and 10,000 federal contractors would lose their jobs under Trump’s proposal. That equates to 5 percent of federal workers in the region.

With those workers earning an average salary of $111,000, the job losses would mean more than $2.2 billion in lost wages, Fuller said. That would reverberate around the city.

“These are basically shutting agencies down whose principal contribution to the Washington economy is jobs,” Fuller said. “These are really good jobs. The average job in a restaurant (pays) $28,000. You’ve got to create a lot of restaurant jobs to replace one of these.”

Washington has come a long way since the 1980s, when it was dubbed the nation’s murder capital amid a crack cocaine epidemic, and the mid-1990s, when the local government went bankrupt and Congress took over the city’s day-to-day operations.

Federal spending increases after Sept. 11, 2001, helped revive the city’s economy, and Washington was largely insulated from the impact of the Great Recession because new federal spending made up for the region’s private-sector job losses, Taylor said.

Of the 19 agencies that Trump wants to eliminate, 16 are headquartered in Washington, and another is just across the river in Arlington, Virginia. Most of the offices are clustered around downtown.

A loss of 10,000 federal jobs headquartered in Washington would translate into at least 1.5 million square feet of vacant office space, Fuller said.

“That’s a lot of space, and nobody’s lining up to take it because the private sector’s contracting,” Fuller said. “It sends out the message – if I were the mayor, I would be concerned – that we’re not open for business. We’re a company town and our core business is shrinking. What message does that send out to other investors and businesses?”

Washington’s population is 48 percent black, and African Americans in the area could be disproportionately affected by the cuts. Earning gaps between whites and blacks in the federal workforce are smaller than in the general population, Taylor said.

“The federal government is an important source of high-paying jobs for the African American community in the Metro region,”Taylor said.

Metro, too, could feel the sting. The transit agency has been beset by reliability issues, and ridership has been declining since 2009. The system’s board of directors recently agreed to raise fares, reduce service and lay off employees to balance this year’s budget, and a continued drop in ridership would mean another round of painful cutbacks next year, a cycle many officials have referred to as a “death spiral.”

The city is analyzing what the proposal would mean for local tax revenues, but that, too, is expected to be significant.

“It’s going to be a double whammy on the fiscal side at the local level,” Fuller said.

Fewer workers with less buying power would hurt the city’s restaurant industry. While Trump has said there are few good restaurants in Washington, the city has in fact become an international dining destination in the past decade.

“The restaurant and foodservice industry in Washington has expanded significantly in recent years, garnering much-deserved attention from Bon Appetit, Michelin and Zagat,” said Kathy Hollinger, president of the Restaurant Association of Metropolitan Washington. “If federal jobs are lost, it will shrink the pool of diners and ultimately result in reduced business for local restaurants that rely on neighboring federal offices to fill their dining rooms.”

Next post Airbus, Samsung, others lobby Trump team on investment