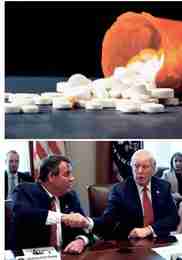 A commission created by President Donald Trump has asked him to declare a state of emergency over the nation’s opioid epidemic.

The recommendation, from a preliminary draft of the opioid commission’s report, comes in the midst of grueling statistics linked to the epidemic. In 2016 alone, drug overdoses likely killed more Americans in one year than the entire Vietnam War. In 2015, drug overdoses topped annual deaths from car crashes, gun violence, and even HIV/AIDS during that epidemic’s peak in 1995.

“With approximately 142 Americans dying every day, America is enduring a death toll equal to September 11th every three weeks,” the report argues. “After September 11th, our President and our nation banded together to use every tool at our disposal to prevent any further American deaths. Your declaration would empower your cabinet to take bold steps and would force Congress to focus on funding and empowering the Executive Branch even further to deal with this loss of life.”

Patrick Kennedy (D), and Dr. Bertha Madras, also makes several other recommendations. Here are some of the big ones:

• Grant waiver approvals for all 50 states to eliminate existing regulatory barriers in the Medicaid program that exclude the federal Institutes for Mental Diseases. Under the Social Security Act, federal Medicaid funds can’t reimburse services from inpatient facilities that treat “mental diseases,” including addiction, with more than 16 beds. Eliminating this barrier would let states “immediately open treatment to thousands of Americans in existing facilities in all 50 states,” according to the commission. the commission.

• Immediately set up and fund a federal program to improve access to medicationassisted treatment. This is the gold standard of opioid addiction treatment, with research showing that it can reduce the all-cause mortality rate among addiction patients by half or more. But it remains inaccessible; only 10 percent of conventional drug treatment facilities in the US provide medication-assisted treatment for opioid use disorder, according to the com mission. The report wants this treatment greatly expanded, from health care settings in prison to traditional drug treatment facilities.

• Expand access to the opioid overdose antidote naloxone. Among other plans, the commission vows to provide model legislation so states can allow the dispensing of naloxone through a standing order. Baltimore Health Commissioner Leana Wen used such legislation in 2015 to let anyone in the city carry naloxone; she estimates that it’s saved more than 950 people from overdose over the past two years.

• Mandate education initiatives, with the help of medical schools and by amending the Controlled Substances Act, to require better training for prescribers about the treatment of pain and addiction. The opioid epidemic began when doctors prescribed an enormous amount of opioid painkillers, causing the drugs to proliferate across the country. By getting doctors to prescribe opioids more responsibly, the commission aims to pull back the original source of the current drug overdose crisis.

• Provide federal support for state-based prescription drug monitoring programs.These programs, which all 50 states now have, let doctors closely watch a patient’s prescription drug history — letting them see if, say, a patient is shopping around to obtain as many opioids as possible from different doctors, or if a patient has a history of misusing drugs. But these programs often aren’t very robust and don’t share data across state lines, which federal aid could help address.

• Fund more research for non-opioid painkillers. The current drug crisis began in part as doctors sought to tackle another major medical problem: 100 million US adults suffer from chronic pain. Despite the lack of evidence for opioids’ effectiveness in treating chronic pain, doctors often responded with opioids. By finding nonaddictive, effective painkillers, the commission wants to give doctors a better, safer option. • Step up efforts to interdict fentanyl. As the opioid epidemic has progressed, many people suffering from opioid drug use disorder have moved from painkillers to heroin. More recently, though, much of this heroin has been laced with the even more potent opioid fentanyl — often without the knowledge of the people buying the heroin. This fentanyl is synthetically manufactured, and it often comes from around the world, such as clandestine labs in China. Among other proposals, the report asks for greater support for law enforcement and US Postal Service efforts — through more manpower and better technology, for example — to catch fentanyl as it’s transported.

The commission’s report addresses both sides of the opioid crisis: what Stanford drug policy expert Keith Humphreys has described to me as the “stock” and the “flow.” On one hand, you have the current stock of opioid users who are addicted; the people in this population need treatment or they will simply find other, potentially deadlier opioids to use if they lose access to painkillers. On the other hand, you have to stop new generations of potential drug users from accessing and misusing opioids.

Next post Ideological rectitude is anathema to American democracy