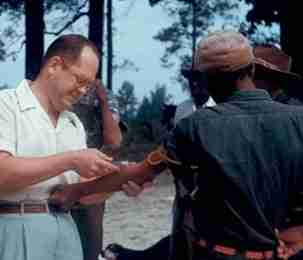 In this 1950′s photo released by the National Archives, a black man included in a syphilis study has blood drawn by a doctor in Tuskegee, Ala. For 40 years starting in 1932, medical workers in the segregated South withheld treatment for unsuspecting men infected with a sexually transmitted disease simply so doctors could track the ravages of the horrid illness and dissect their bodies afterward.

[Editor’s note: This is Part I of a three part series Part II and Part III will be published in consecutive weeks]

TUSKEGEE, Ala. (AP) — Decades later, it’s still hard to grasp what the federal government did to hundreds of black men in rural Alabama — even if you’re among their descendants, lighting candles in their memory.

For 40 years starting in 1932, medical workers in the segregated South withheld treatment for unsuspecting men infected with a sexually transmitted disease simply so doctors could track the ravages of the horrid illness and dissect their bodies afterward.

Finally exposed in 1972, the study ended and the men sued, resulting in a $9 million settlement. Twenty years ago this May, President Bill Clinton apologized for the U.S. government. It seemed to mark the end of this ugly episode, once and for all.

Relatives of the men still struggle with the stigma of being linked to the experiment, commonly known today as the “Tuskegee Syphilis Study.” For years they have met privately to share their pain and honor the victims.

And, amazingly, that classaction lawsuit filed by the men in 1973 has outlived them all. The litigation continues to this day, with a federal court currently considering a request that will help determine the study’s final legacy.

A key, unanswered question: What should be done with unclaimed settlement money that still sits in court controlled accounts?

Lille Tyson Head wants you to know that her father, Freddie Lee Tyson, wasn’t just a man infected with syphilis.

Once a sharecropper in the fields of rural eastern Alabama, Tyson became a carpenter early in his marriage to Johnnie Mae Neal Tyson. He helped build Moton Field, where the famed “Tuskegee Airmen” learned to fly during World War II. He later worked as a firefighter there, his daughter said. He also worked for the government after it established the Tuskegee National Forest in eastern Alabama. Around 1960, he moved the family out of the Jim Crow South to Connecticut, where he worked in a factory.

“He was a wise man, very gentle. He was a disciplined man. Active in the church, loved his family and his extended family,” said Head, of Wirtz, Virginia, one of the Tysons’ eight children. “He was a good man. He had a sense of humor, he was a good dancer.”

Though he displayed no symptoms, Tyson also was born with congenital syphilis inherited from his mother, Head said. And that is how he became a participant in “The Tuskegee Study of Untreated Syphilis in the Negro Male.”

Located about 40 miles east of the state capital of Montgomery, Macon County is one of the poorest places in a poor state. In the early 1900s, the majority black county was a hotbed for syphilis, which affected about 35 percent of its residents of reproductive age.

In 1929, government doctors working in conjunction with a philanthropic fund began treating syphilis patients in the county with bismuth and mercury. Few people were cured, according to a summary from the Centers for Disease Control and Prevention, and some died.

Three years later, the U.S. Public Health Service, working with state and local health agencies, began what was supposed to be a shortlived program in Tuskegee to record the progression of the illness, which begins with a small sore and can progress to open wounds, blindness, deafness, mental illness and death.

Workers initially recruited 600 black men into a health program with the promise of free medical checks, free food, free transportation and burial insurance in a county where many blacks had never even seen a doctor. The men were tested and sorted into groups — 399 with syphilis and another 201 who were not infected.

The disease-free men were used as a control group. Health workers told syphilitic fathers, grandfathers, sons, brothers and uncles only that they had “bad blood.”

None of the men were asked to consent to take part in a medical study. They also weren’t told that “bad blood” actually was a euphemism for syphilis. Instead, doctors purposely hid the study’s purpose from the men, subjecting them during the study’s early months to painful spinal taps and blood tests.

Medical workers periodically provided men with pills and tonic that made them believe they were being treated, but they weren’t. And doctors never provided them with penicillin after it became the standard treatment for syphilis in the mid-1940s.

The government published occasional reports on the study, including findings which showed the men with syphilis were dying at a faster rate than the uninfected. But it’s doubtful any of the men — or their wives, girlfriends or other sexual partners — had any idea what had happened until an Associated Press story was published nationwide on July 26, 1972.

Next post FCC must confront network obscenity and distorted news