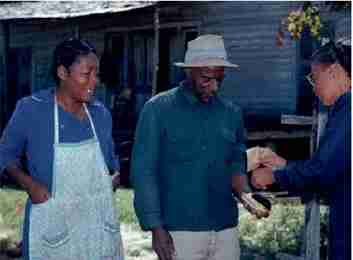 Nurse performs a blood test on a gentleman.

[Editor’s Note: Part I covered the 1932 actions of medical workers in the segregated South who withheld treatment for unsuspecting black men infected with Syphilis, a sexually transmitted disease simply so doctors could track the ravages of the horrid illness and dissect their bodies afterward. Medical workers periodically provided men with pills and tonic that made them believe they were being treated, but they weren’t. And doctors never provided them with penicillin after it became the standard treatment for syphilis in the mid-1940’s. Part II covered the litigation that ensued on behalf of the victims.]

Descendants of the men began gathering a year or two after Clinton hosted five remaining test survivors in the White House. The meetings are held in conjunction with Tuskegee’s National Center for Bioethics in Research and Health Care, established in 1999 to address ethical and human rights issues in science, particularly concerning minorities.

The last man involved in the syphilis study died in 2004 and this year, for the first time, relatives both allowed The Associated Press into their annual gathering and invited the public to a ceremony where they lit candles for the men.

“It was important that the people of Macon County knew what the descendants were doing, and it gave them a chance to come out and be a part not only of the healing but also remembering of the men,” she said. In the future, she hopes, more descendants “will come out of the shadows and be a voice for their fathers and grandfathers.”

Retired public health nurse Amy Pack both visited with men of the study through her job in Macon County and had relatives who were among the test subjects, including great-uncle Seth Barrow. She said the foundation is still trying to find additional descendants; there’s a small chance that syphilis dating back to the years of the study could still be in the bloodlines of families who are unaware of their connection to the study, she said.

Settlement funds were used for decades to compensate study participants and more than 9,000 of their relatives. Court workers were unable to locate other descendants, and some never responded to letters from the clerk’s office, which disbursed millions before the last payment was recorded in 2008.

Court officials will not say how much money is left, but documents indicate the balance is mostly interest earnings from money first paid by the government decades ago. Gray said he’s heard it’s less than $100,000.

Some family members say the money should be used for additional funding for medical screenings for the men’s families, and others want a long-discussed memorial at the old hospital where the study was run at Tuskegee University.

U.S. District Judge Myron Thompson is currently considering a request Gray filed in August to use the remaining money to fund operation of the Tuskegee Human and Civil Rights Multicultural Center, a combination museum and town welcome center that includes a display about the syphilis study.

The center is located in an old bank building owned by the county, and it’s operated by a nonprofit headed by Gray and his daughter; the organization had net assets of more than $850,000 in 2015, with money coming from grants and donations, tax records show. The names of the men who were involved in the program are etched in a circle on the floor as a memorial.

In his address to descendants during the community service, Gray made what amounted to a closing argument for using the money for the museum, which is open only during the summer because of funding shortages. Gray told descendants that the men of the study — the people he represented after that meeting with Charlie Pollard — wanted a lasting memorial to their legacy, and he has worked for 20 years to make it happen at the center.

A judge refused a similar request from Gray to provide the leftover money to the museum in 2004 after the government insisted it should get the money, records show.

But Pollard’s 92-year-old daughter, Ralphine Pollard Harper, said she likes the idea. People need to know what happened, she said, even if her father didn’t like discussing the study.

“He’d get mad about it,” she recalled. “He said, ‘They just took us up here and made guinea pigs of us.’”

Next post World’s leading expert on Ebonics given top honor