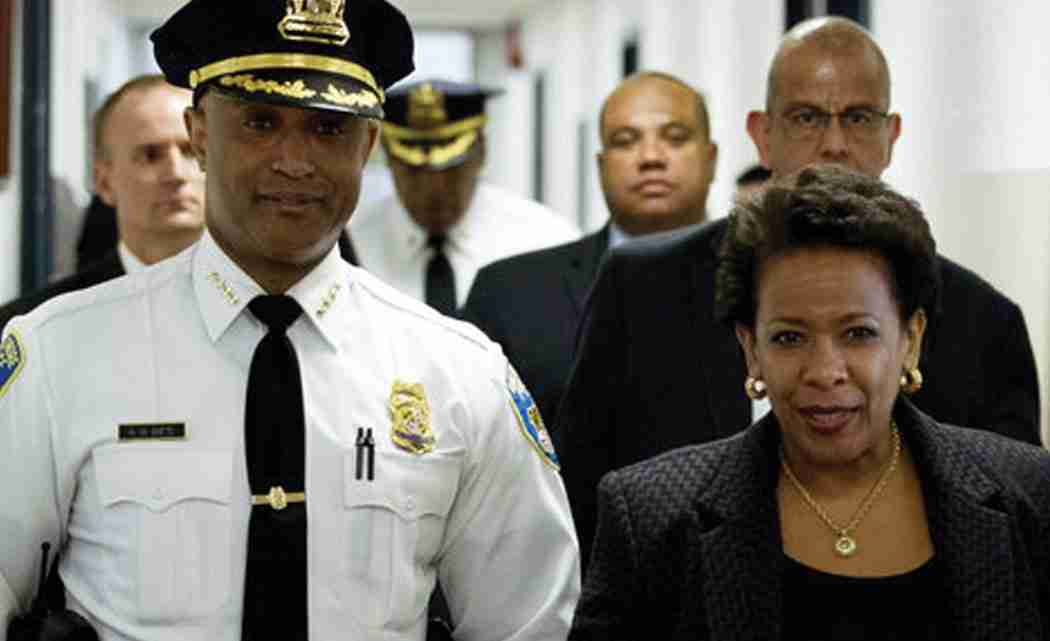 WASHINGTON — The Justice Department waded anew Friday into fraught, big city police-community relations, with new Attorney General Loretta Lynch declaring the subject “one of the most challenging issues of our time.” She announced a wide-ranging investigation into Baltimore’s police.

The federal civil rights investigation, which city officials sought following the death last month of a man in police custody, will search for discriminatory policing practices and examine allegations that Baltimore officers too often use excessive force and make unconstitutional searches and arrests.

The investigation is to build upon the government’s voluntary and collaborative review of the Baltimore police that began last year. Since then, the death of 25-year-old Freddie Gray and the days of rioting that followed exposed a “serious erosion of public trust,” Lynch said, and showed that community concerns about the police were more pervasive than initially understood and that a broader investigation was warranted.

“It was clear to a number of people looking at this situation that the community’s rather frayed trust – to use an understatement – was even worse and has, in effect, been severed in terms of the relationship with the police department,” Lynch said.

The announcement indicated that Lynch, who was sworn in recently as the successor to Eric Holder, is likely to keep the Justice Department engaged in a national dialogue about race relations and law enforcement. That issue consumed the final year of Holder’s tenure and flared most vividly last summer following the shooting death of an unarmed black 18-year-old by a Ferguson, Missouri, police officer.

The federal department has undertaken dozens of other city police investigations, including more than 20 during Holder’s tenure. If they find systemic civil rights violations, the investigations typically result in court-enforceable agreements between the federal government and the local community that serve as blueprints for change and are overseen by an independent monitor. The Justice Department has the option of suing a police department that is unwilling to make changes.

In some cases, such as in Ferguson – where Justice found sweeping patterns of racial discrimination – the federal government has initiated the process on its own; in others, including in Cleveland and Albuquerque, New Mexico, city officials made the request.

A separate Justice Department review of Baltimore police policies, by the Community Oriented Police Services office, will continue but its findings will be folded into the new civil rights investigation announced on Friday, Lynch said.

Lynch visited Baltimore earlier this week to meet with city and community leaders as well as Gray’s family.

“We’re talking about generations, not only of mistrust, but generations of communities that feel very separated from government overall,” she said on Friday. “So you’re talking about situations where there’s a flashpoint occurrence that coalesces years of frustration and anger. That’s what I think you saw in Baltimore.”

The city endured days of unrest after Gray died April 19 following a week in a coma after his arrest. Protesters threw bottles and bricks at police the night of his funeral on April 27, injuring nearly 100 officers. More than 200 people were arrested as cars and businesses burned. Last week, Baltimore’s top prosecutor charged six police officers in connection with the death, and the Justice Department is investigating the encounter for potential civil rights violations.

Friday’s announcement followed a request from Baltimore Mayor Stephanie Rawlings-Blake, who initially appeared determined to fix the city’s problems on her own but then on Wednesday requested a Justice Department investigation.

“Our city is making progress in repairing the fractured relationship between police and community, but bolder reforms are needed and we will not shy away from taking on these challenges,” she said in a statement.

Baltimore police Capt. J. Eric Kowalczyk, a department spokesman, said Police Commissioner Anthony Batts stands by a statement in which he said he welcomed the mayor’s request “with open arms.”

“We have never shied away from scrutiny or assistance,” Batts said on Thursday. “Our work is ongoing and anyone who wishes to be a part of helping the department better connect with the community will always be welcome.”

He has said the department has accomplished reforms and made progress during his 2 1/2 years in office. By the end of 2014, he said, complaints about discourtesy had fallen 54 percent, and excessive force complaints were down more than 40 percent.