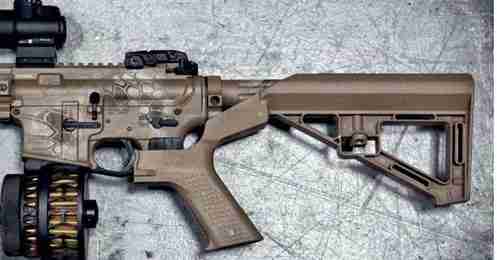 The Las Vegas shooter had a cheap modification that made his rifles more deadly.

By MICHAEL BALSAMO and SADIE GURMAN

LAS VEGAS – The man who unleashed hundreds of rounds of gunfire on a crowd of concertgoers in Las Vegas had two accessories that allowed his semi-automatic rifles to fire rapidly and continuously, as if they were fully automatic weapons, officials said.

Though legally and widely available, the so-called “bump stocks” have attracted scrutiny from authorities and lawmakers in recent years.

California Sen. Dianne Feinstein, who has long expressed concern over the availability of such accessories, said Tuesday that Las Vegas shooter Stephen Paddock modified at least one of his weapons with a bump stock device, but she did not elaborate.

“Individuals are able to purchase bump fire stocks for less than $200 and easily convert a semi-automatic weapon into a firearm that can shoot between 400 and 800 rounds per minute and inflict absolute carnage,” she said, calling for a ban on their sale.

A semi-automatic weapon requires one trigger pull for each round fired. With a fully automatic firearm, one trigger pull can unleash continuous rounds until the magazine is empty. The bump-stock devices work by manipulating the trigger mechanism extremely rapidly, far faster than a person could do so without them.

They are investigating whether those items were used to modify weapons used in the massacre, according to the officials, who were briefed by law enforcement and spoke on condition of anonymity because the investigation is still unfolding. Sheriff Joseph Lombardo hasn’t said whether they played a role in the rampage.

Authorities say Paddock opened fire from the windows of his 32nd floor hotel room late Sunday, killing 59 people and wounding hundreds more at a country music festival. Police stormed his room and found he had killed himself after committing the deadliest mass shooting in modern U.S. history.

Witnesses and law enforcement officials said the quick, 50-round bursts of gunfire raised the possibility that Paddock had used a fully automatic weapon or modified his semi-automatic rifles to function like one. Paddock had 23 guns in his hotel room.

Yet the purchasing of fully automatic weapons has been significantly restricted in the U.S. since the 1930s.

In 1986, the federal National Firearms Act was amended further to prohibit the transfer or possession of machine guns by civilians, with an exception for those previously manufactured and registered.

Numerous attempts to design retrofits failed until recent years when bump stocks came on the market.

The device basically replaces the gun’s shoulder rest, with a “support step” that covers the trigger opening. By holding the pistol grip with one hand and pushing forward on the barrel with the other, the shooter’s finger comes in contact with the trigger. The recoil causes the gun to buck back and forth, “bumping” the trigger.

Technically, that means the finger is pulling the trigger for each round fired, keeping the weapon a legal semi-automatic.

And they continue to sell. Ed Turner, a former police officer who owns a gun shop in Stockbridge, Georgia, said he’s seeing a run on bump stocks since the shooting.

While he would be surprised if he had sold two of them in the past decade, he is now unable to find any available, even from wholesalers.

Previous post Broward statue may be moved over racist speech