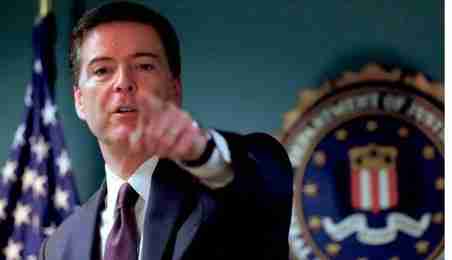 (AP) – In the days before his firing by President Donald Trump, FBI Director James Comey told U.S. lawmakers he had asked the Justice Department for more resources to pursue the bureau’s investigation into Russia’s interference in last year’s presidential election, three U.S. officials said Wednesday. The officials said Comey met last week with Rod Rosenstein, the deputy attorney general, to make the request. Comey then alerted lawmakers with ties to the concurrent congressional investigations into Russia’s meddling, according to the officials, who insisted on anonymity in order to disclose the private conversations. Justice Department spokeswoman Sarah Isgur Flores said it was false that Comey had asked Rosenstein for money for the Russia investigation.

(AP) – Senate Majority Leader Mitch McConnell fended off criticism Tuesday that a working group of Republican senators he’s asked to craft a health care bill lacks women, saying all 52 GOP senators were shaping the legislation. The all-male makeup of the 13-member group was clearly an irritant among some of the chamber’s five GOP women. It also became a target for Democrats eager to paint the evolving Republican legislation as a measure that’s damaging to women needing medical care, even as key decisions are being made by men.

(AP) – For sale: Luxury waterfront escape. Comes with two villas and five acres of paradise. And perhaps a bit of goodwill from the president of the United States? President Donald Trump’s corporate trust is selling a multimillion-dollar Caribbean resort, presenting an enticing new way for a wealthy interest to get the president’s attention and creating a fresh ethical dilemma for a first family dogged by the repeated collision of its corporate ties and public service. Just in the past few days, the Kushner Companies, the real estate company run by Trump’s in-laws, apologized for advertising its connections to the White House during a pitch to Chinese investors. Ivanka Trump and other government employees are hawking her new book on social media – despite her assertion that she won’t promote it.

(AP) – The Trump administration announced Tuesday it will arm Syria’s Kurdish fighters “as necessary” to recapture the key Islamic State group stronghold of Raqqa, despite intense opposition from NATO ally Turkey, which sees the Kurds as terrorists. The decision is meant to accelerate the Raqqa operation but undermines the Turkish government’s view that the Syrian Kurdish group known as the YPG is an extension of a Kurdish terrorist organization that operates in Turkey. Washington is eager to retake Raqqa, arguing that it is a haven for ISIS operatives to plan attacks on the West.

(AP) – The White House says President Donald Trump is sending a certified letter to Sen. Lindsey Graham attesting that the president has no connections to Russia. Graham told CNN on Tuesday he wants to explore possible ties between Trump’s businesses and Russia. The South Carolina Republican chairs a Senate Judiciary subcommittee that is investigating Russian interference in the 2016 presidential election. White House spokesman Sean Spicer says Trump has asked a Washington law firm to send a certified letter to Graham stating that he has no connections to Russia.

HARSHER SENTENCES COULD RESULT FROM GUIDANCE WEIGHED BY US WASHINGTON

(AP) – Justice Department officials have been weighing new guidance that would encourage prosecutors to charge suspects with the most serious offenses they can prove, a reversal of Obama-era policies that aimed to reduce the federal prison population and show more leniency to lower-level drug offenders.

(AP) – Republicans relentlessly complained about big budget deficits during Democratic President Barack Obama’s two terms, but now a growing number in the GOP are pushing for deep tax cuts even if they add to the government’s $20 trillion debt.

(AP) – President Donald Trump is delaying a decision on whether to withdraw from the landmark international climate deal struck in Paris under the Obama administration….