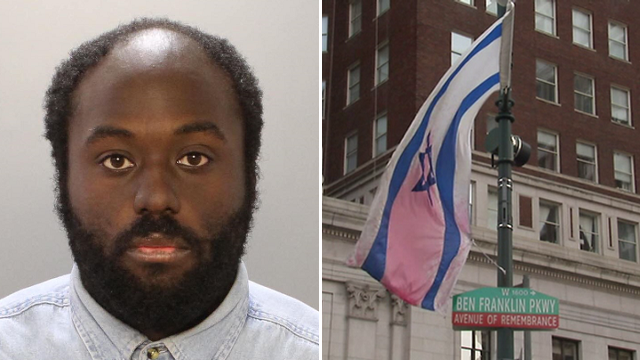 MAN IN CUSTODY FOR VANDALISM OF ISRAELI FLAG IN PHILADELPHIA

PHILADELPHIA (AP) – A man accused of splattering red paint on an Israeli flag in Philadelphia has been taken into custody. Laura Frank, an employee of the Jewish Federation of Greater Philadelphia, tells the Philadelphia Inquirer she saw a man standing near the flag with a paint gun on Tuesday and called police. Democratic Mayor Jim Kenney confirmed a suspect was taken into custody and decried the vandalism as hateful. Kenney said “emotions are running high” after Israeli soldiers killed dozens of Palestinians protesting on the Gaza border on Monday. The protests were partly driven by anger over the relocation of the U.S. Embassy in Israel from Tel Aviv to Jerusalem. The vandalism suspect’s name hasn’t been released. The flag hangs along a major boulevard as part of a display of world flags.

NEW YORK (AP) _ A former Playboy centerfold involved in a custody battle apparently jumped with her 7-year-old son to their deaths from the 25th floor of a Manhattan hotel, law enforcement officials said Friday. Stephanie Adams and her son Vincent fell 23 floors and were found on a second-floor balcony at about 8:15 a.m. Friday in the rear courtyard of the Gotham Hotel. They had checked into the hotel’s penthouse suite at about 6 p.m. Thursday, officials said, just hours after she told the New York Post that her husband and his lawyer were blocking her from taking her son away on vacation. “All I want to do is take my son and get away from this nightmare for a few days,” the Post quoted Adams as saying. “But they won’t let me.” The law enforcement officials said the 46-year-old Adams, who first posed for Playboy in 1992, was involved in a custody dispute over Vincent with her estranged husband, a Manhattan chiropractor named Charles Nicolai. They said police had been called to their home several times in the past few months. The officials were not authorized to speak publicly and spoke to The Associated Press on condition of anonymity. Nicolai’s lawyer did not immediately respond to an inquiry about the case. A receptionist who answered the phone at Nicolai’s office said he would not comment and was unreachable. The Gotham Hotel is on 46th street, about four blocks from Grand Central Terminal.

JACKSON, Miss. (AP)- The Mississippi home of a slain civil rights leader is closer to becoming a national monument. The U.S. House voted Tuesday to pass a bill that would establish the Medgar National Monument in Jackson. The Senate must still vote on the measure filed democratic Rep. Bennie Thompson of Mississippi. As Mississippi’s first NAACP field secretary, beginning in 1954, Evers protests and boycotts to fight segregation. He was assassinated by a white supremacist outside his family’s Jackson home in 1963. If the modest ranch-style home becomes a national monument, the federal government will take it over from Tougaloo College, bringing more money for preservation college supports the change. The federal Antiquities Act gives the president wide authority to designate monuments to protect federal sites considered historic or geographically or significant. Monuments also can be designated by Congress. President Trump ordered reductions to several large national monuments in the West, calling them part of a “massive land grab” by Barack Obama and other presidents. The chairman of the House Natural Resources Committee, Republican Rep. R of Utah, said on the House floor Tuesday that the proper way to create monuments is by legislative action. Making the Evers home a national monument is widely supported by Republicans and Democrats.

ARREST RECORDS OF ROSA PARKS, MLK TO BE PRESERVED

MONTGOMERY, Ala. – Court records from the arrests of Rosa Parks, Martin Luther King Jr. and others at the dawn of the modern civil rights era are being preserved after being discovered in an Alabama courthouse. Archivists at historically black Alabama State University are cataloguing and flattening dozens of documents found at the Montgomery County Courthouse. Circuit Clerk Tiffany McCord hopes electronic versions will be available for viewing as early as late June. Once the records are added to Alabama’s online court system, historians and others will be able to read the original pleadings filed by Parks’ attorneys following her refusal to give her seat to a white man on a Montgomery city bus in 1955. Parks’ arrest led to the Montgomery Bus Boycott, which launched a young King to prominence.

ANN ARBOR, Mich. (AP) — A former Eastern Michigan University student who admitted to painting racist graffiti on campus has been ordered to pay more than $2,000 in restitution. The Ann Arbor News reports 29-year-old Eddie Curlin learned his punishment Monday after earlier pleading guilty to malicious destruction of property. He also pleaded no contest to unrelated counts of identity theft and must serve two to five years in prison on those charges. The graffiti was found on exterior building walls in 2016. A racist message also was found last year in a restroom. University officials say Curlin, who is black, vandalized the buildings then acted as a police informant. Officials say it was a pretense to help solve the case, have previous charges against him dropped and return to the school in Ypsilanti.

FLORIDA JUDGE COULD BE SUSPENDED 30 DAYS FOR RACIAL COMMENTS

TALLAHASSEE, Fla. (AP) – A Florida judge could face suspension and a fine for making racial comments to describe a defendant and members of the public. The state’s Judicial Qualifications Commission on Monday recommended that Miami Dade County Circuit Judge Stephen Millan be suspended for 30 days without pay and pay a $5,000 fine. Documents filed with the Florida Supreme Court show that Millan admitted to twice using demeaning language. In October 2016, he used a slur to describe a black defendant. In another instance, he referred to friends and family members of a black defendant as “thugs.” Millan also had a conversation about pending cases with a defense attorney outside nd attended a seminar on racial bias. The Florida Supreme Court will decide Milan’s punishment.