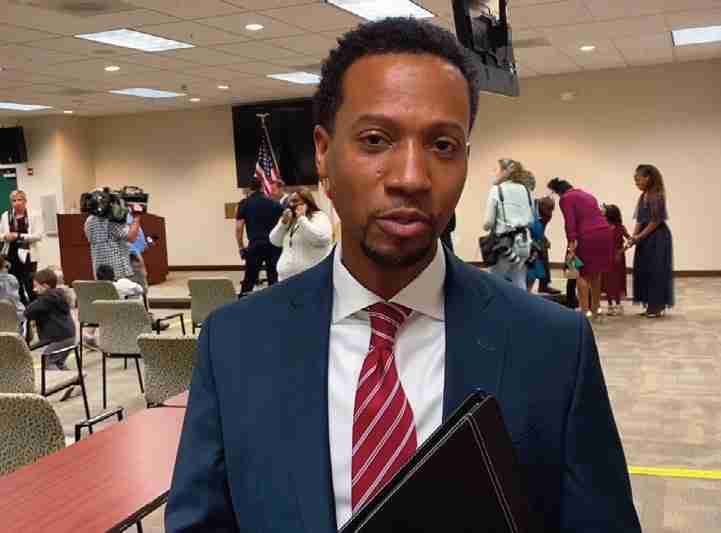 Alston, 37, is the only Black currently serving on the commission representing District 9.

Jared Moskowitz was also appointed to the Broward County Commission for District 8.

Alston, a Republican, was sworn in by his friend and fellow member of the New Mount Olive Baptist Church, Broward County Circuit Judge George Odom Jr.

Alston, who lives in Ft. Lauderdale, replaces Dale Holness and serves out his remaining term which ends in November 2024.

Holness gave up his seat to run for Congressional District 20 but lost in a special primary election to Shelia Cherﬁlus-McCormick, a Democrat, who replaces Alcee Hastings who died of cancer last year.

According to Broward County, the appointments mark the ﬁrst time two former Parkland commissioners are serving on the county dais. Currently, Parkland resident Michael Udine is serving as mayor.

Alston said "wow" his initial reaction when DeSantis appointed him to the Broward County Commission. "I am so excited and grateful for the governor," Alston told South Florida Times during an exclusive interview. "It shows that God is good and I’m grateful to serve the community where I was born and raised and attended church and school. I’m excited to represent not only District 9 but county wide. I’m ready to ﬁght for issues that are important for District 9." Alston’s district includes portions of Ft. Lauderdale, Lauderdale Lakes, Oakland Park, Sunrise and Plantation.

Alston said he’s ready to address county wide issues like transportation improvement, economic development, and small minority business development. "Small issues among many that are important to District 9 and all of Broward County," he said. "I’m looking forward to rolling my sleeve up and work for the district and the county."

Alston has an extensive background in public service and, he said he understands services at the grassroots level. Alston said he served as FDOT’s chief of staff for nearly three years overseeing a $10.3 billion enterprise with more than 6,200 employees.

Previously, he was chief of staff to two Broward County Commissioners and held senior positions in Miami Dade County Public Schools, the City of Gainesville, and the Florida Department of Management Services.

Alston said he previously served on the Florida Agricultural and Mechanical University (FAMU) Board of Trustee for ﬁve years, City of Fort Lauderdale Audit Advisory Committee, and City of Oakland Park Board of Adjustment.

He earned his bachelor’s and master’s degrees in business administration from FAMU Florida Agricultural and Mechanical University.

DeSantis said both Alston and Moskowitz will bring new leadership to the Broward County Commission. “Torey Alston and Jared Moskowitz are both Broward County natives with demonstrated records of service to the community and proven ability to work across party lines to get things done,” said. DeSantis. “I expect both to bring sane, rational leadership to the commission and look forward to working with them.”

Alston is married to Candice Alston, and they have two children, Elliot and Torey.