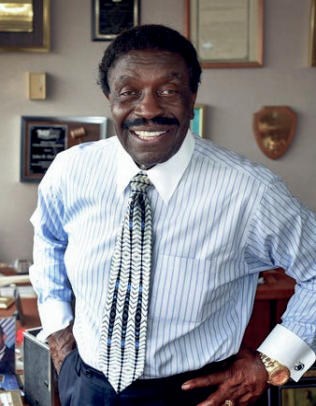 WEST PALM BEACH, Fla. – John H. Howard, founder and CEO of the Black Business Investment Corporation (BBIC), was noted around the globe for his business acumen.

It was his unwavering passion for helping small Black businesses for which he will most be remembered.

Howard succumbed to illness in West Palm Beach on July 11, at 83, leaving an appreciative community to cherish his contributions.

Howard made it his life’s mission to help Black and minority-owned entrepreneurs obtain bank loans to open or expand, providing them a ﬁghting chance to make it as a Black business. He went to bat for the people.

He also made history as the ﬁrst president of a Black-owned bank in Florida, the former Palm Beach Lakes Bank of West Palm Beach. He was lauded as a trailblazer.

In 2018, family, friends and business associates gathered for his retirement, which attendees said was second to none. Many had personally beneﬁted from the BBIC with loans to start or sustain their businesses.

Attorney JoLinda Herring, Esq., CEO and managing shareholder of Bryant Miller Olive Law Firm, where she oversees seven law ofﬁces throughout the United States, fondly recalled working alongside Howard when she was a part of the former Suncoast Chamber of Commerce. Herring was once president of the organization of Black businesses.

“The Suncoast Chamber and the BBIC worked closely together,” said Herring, who at the time was working with her father’s company, Herring Paving.

“What he did for Black businesses was awesome, but educational as well. He helped black businesses to not just get capital, but to understand what they needed to sustain a business. He really championed black businesses,” said Herring, who is today close friends with Howard’s son Jasper Johnson and his wife. Johnson is regional president of Clear Channel Communications.

Palm Beach County community stalwart Dan Calloway, for whom a sports and recreation complex in Riviera Beach is named, described Howard as a pioneer.

“He was the ﬁrst in our area working between lending institutions and businesses,” Calloway said. “Myself and (the late) Herman McCray went over there to get funding for Herman’s barbecue place.”

Today, McCray’s son Derrick McCray is continuing his father’s legacy with a BBQ place of his own, McCray’s Backyard BBQ and Seafood, noted for annually serving fans at the Super Bowl.

“You need a John Howard,” he said. “You need this now more than ever.”

Howard’s legacy is permeating the land, said Patrick Franklin, president and CEO of the Urban League of Palm Beach County.

“Twenty years ago when I came here, he helped acclimate me to the West Palm Beach and Riviera Beach environment,” Franklin said. “I believe the seeds he’s sown are bearing fruit. We’re getting the purpose of what he wanted to do. Is it fast enough? No! But thanks to John, it is happening.”

Howard was a professional baseball player with the Baltimore Orioles until he sustained injury. He also served with honors in the United States Army. He earned a master’s degree in Business Administration from the University of Miami after attending Syracuse University and the University of Florida.

He is survived by his wife of many decades, Christine, sons and a daughter, grandchildren and great-grandchildren.

Previous post Have fun but stay safe too on summer escapes