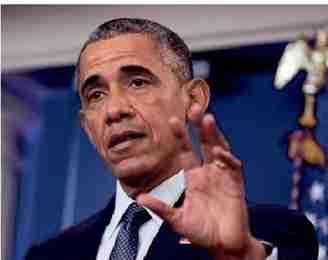 WASHINGTON – The Obama administration has added nine communities to its effort to ease access to federal aid and cut red tape for areas beset by joblessness, hunger, crime and poor housing.

The Spokane Indian Reservation and com- munities near Spokane, Washington, and the Turtle Mountain Band of Chippewa Indians and their communities around Rolette County, North Dakota also were selected.

The list brings to 22 the number of urban, rural and Indian communities that carry the Promise Zone designation, a cornerstone of President Barack Obama’s anti-poverty and urban development agenda. The designation comes with no guaranteed new federal money but gives communities an advantage in applying for grants, as well as special access to federal employees who act as liaisons and guides through federal bureaucracy.

Since launching with five zones in January 2014, the zones have secured more than $550 million in federal investments, according to the White House. The designations are awarded in a competi- tion that rewards applicants who’ve crafted a clear and comprehensive plan for addressing the area’s needs, said Cecilia Munoz, director of the White House’s Domestic Policy Council.

“The Promise Zone program is built on the notion that local leadership is in the best position to know how to reach a tipping point locally,” Munoz said. “If you’re selected, we will be your partner. We will mobilize ourselves as the federal government in service of your plan.”

The place-based approach has a long history of similarly named programs. Each has tried to combat poverty by concentrating federal aid in an area – with mixed results. With bipartisan backing, Clinton administration-era empowerment zones, enterprise communities and community-renewal programs all tried to attract businesses to blighted areas with tax credits, low-interest loans and other advantages. Some of the areas included in the “promise zones” were part of that effort, a fact some point to as a sign of failure.

The administration says its incarnation is different because it is based not on an infusion of federal cash, but on a locally designed plan and multi-agency involvement. In addition to trying to draw businesses, the communities seek access to education programs, affordable housing, redevelopment and job training.

“The No. 1 thing you hear the most is economic development, small business development – the grocery store, the dry cleaners, fresh food. But it’s also infrastructure improvement, better sidewalks, better roads, abandoned lots that need to be redevelopment,” said Secretary of Housing and Urban Development Julian Castro, whose agency implements the urban zones. “These are plans that come from the grassroots up, from the neighborhood up. They’re very specific to neighborhood, and they have buy-in from partners across the board.”

The designation comes with a 10-year com- mitment intended to help carry the program into the next administration. Agriculture Secretary Tom Vilsack said he thinks the program, and others like it, will have a lasting effect on the way the federal government partners with local officials. “The next administration may call it some- thing different, but at the end of the day it will be a continuation of the place-based effort because it works,” Vilsack said.

It’s too early for definitive data on results. But the administration claims it’s seeing an early impact. It points to a $21 million tax credit secured by the Choctaw Nation zone for construction of a steel manufacturing facility. The Los Angeles zone has won $14.2 million in Education Department grants supporting 17 schools.

Sacramento’s Del Paso Heights neighborhood got its first grocery store in 30 years, creating 40 jobs, because the owners wanted to invest in a promise zone, the White House said. The new zones’ goals vary. With a poverty rate of nearly 38 percent, Nashville’s zone, including neighborhoods just south, east and north of the city’s central business district, will aim to improve access to transportation and employment.

The south Los Angeles zone, including heavily Hispanic and African-American neighborhoods, wants to help residents take advantage of planned redevelopment around light rail stations in the area. The eastern Puerto Rico zone was hit hard by the 2004 closure of Naval Station Roosevelt Roads, leaving it with a poverty rate approaching 46 percent and unemployment topping 18 percent. Efforts will focus on adapting from a military economy to marine industry and boosting tourism, the White House said.