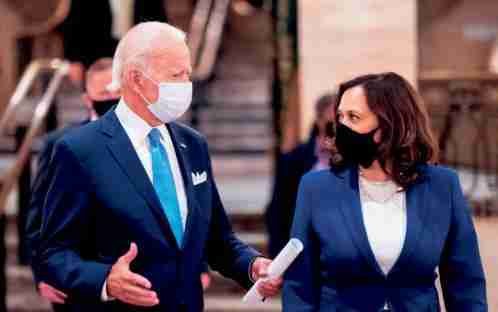 North Miami, Fla. – Shouting literally from the outdoor rafters Sunday at Florida International University in North Miami, former President Barack Obama touted that Black lives do indeed matter. He told the largely Black crowd at the drive-up rally that it’s imperative they vote to get rid of President Donald Trump. He held no punches in his 45-minute speech, with cars honking every few minutes because the crowd liked what he said.

Obama urged those gathered to take no chances that President Trump would return to the White House. “Donald Trump doesn’t care about you! I ask you to vote for Joe (Biden) and Kamala (Harris) because we need someone who cares about you! I believe we’re all in this together, as Americans, as family. But apparently that’s not how this man thinks.”

As Obama crossed the state this week, he blasted Trump’s handling of the coronavirus pandemic. “He doesn’t even acknowledge there’s a problem. This White House hasn’t done anything but screw this thing up. Trump has no plan!” He also said Trump has never had a plan or replacement for the Affordable Care Act. “Why would you want to take people’s health care at the very moment they need health care? What kind of sense does that make?” But perhaps the most rousing moment for the audience came when Obama talked about race. “When you have a President, who won’t call out- or even criticize White supremacists, that’s a problem. It affects us all. It affects the way our children see things.” Horns honked. “And that’s why you’ve got to get out and vote! I hear people say their vote doesn’t make a difference. We haven’t come close to seeing what would happen if everybody votes! Black Lives Matter!” Acknowledging the fact that Black women take to the polls more than Black men, he urged Black men to get to the polls, citing they can’t sit this one out. “This is the most important election in our lifetime,” said the former president who turned out record numbers at the polls himself, making history as the ﬁrst Black president in the country.

That’s a sentiment resonating across the land, and not just with the former president – that Black men must turn out in record numbers for this election. That’s also the reason four Black men have organized a rally in Palm Beach County calling on 500 Black men to show up at Wells Recreation Center in Riviera Beach this Sunday at 3 p.m. – an early voting site. “We’re going to be there until the last man votes,” said Riviera Beach Councilman Douglas Lawson, one of the organizers. The event was moved from last Sunday to this Sunday due to rain. “It’s critical,” said Michael Carter, a political strategist and another organizer. “We need every Black male in the county to come out and bring someone with them,” said Carter.

President and CEO of the Urban League of Palm Beach County, Patrick Franklin, says the Black male vote is crucial because their voices have to be heard, otherwise someone else will implement policies that do not have their best interest at heart. That’s why Franklin is doing something unconventional to get all families to the polls.

Several donors, including the National Urban League, have made it possible for him to have four state of the art tour buses, beautifully decorated, to crisscross the entire county to take people to the polls. They’re running 14 days during early voting and again on Election Day. “This is history. This has never been done before,” said Franklin.