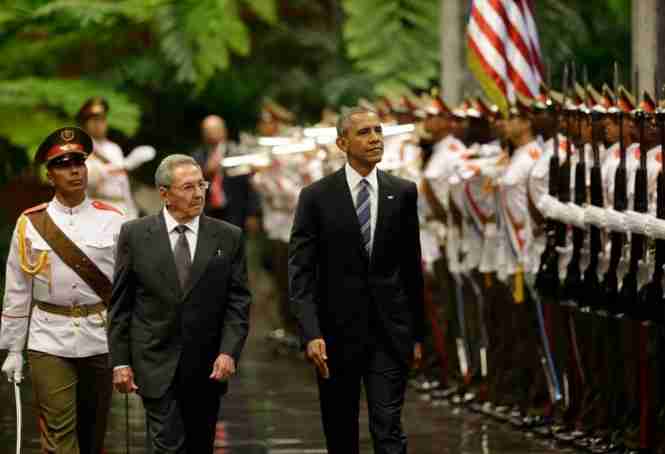 After responding to a handful of questions, Castro ended the news conference abruptly, declaring, “I think this is enough.”
Obama then leaned in toward Castro, perhaps to pat him on the back. But in an awkward misfire, the Cuban leader tried to seize Obama’s arm triumphantly and ended up holding it in the air as Obama’s wrist dangled, a moment that immediately ricocheted on social media.

Criticized for briefly detaining demonstrators thousands of times a year, Cuba has drastically reduced its practice of handing down long prison sentences for crimes human rights groups consider political. Amnesty International said in a recent report that it knew of no prisoners of conscience in Cuba.
It’s extremely rare for Raul Castro to preside over a formal news conference, although he has sometimes taken reporters’ questions when the mood strikes. The White House worked hard to get him to agree.

Obama, speaking earlier alongside Castro at the Palace of the Revolution, declared “a new day” for the U.S. and Cuba, which were estranged for half a century until he and Castro pursued a diplomatic thaw 15 months ago. Both men pledged to keep working toward a new path forward between their two countries, putting the onus on each other to take needed steps to clear the way.

“The embargo’s going to end,” said Obama, who has tried but failed to get Congress to repeal it. “When, I cannot be entirely sure, but I believe it will end.”
Yet for all the talk about bread-and-butter issues, it was the astonishing sight of a Cuban and American leader taking questions together that promised to be an enduring image of Obama’s trip.
Since succeeding his brother F-idel in 2008, Castro has orchestrated economic and social reforms with broad-based impact, though to many Cubans and foreigners, they appear slow to materialize. Hundreds of thousands of Cubans can now pursue free enterprise, and restrictions on cellphones and Internet have been eased.

Yet Castro has given little ground when it comes to changing Cuba’s single-party system or easing strict limits on media, assembly and political dissent. His government has also repeatedly chided Obama for saying he wanted to empower Cubans.

Obama said he and Castro had spoken openly about U.S. concerns over Cuba’s human rights record, calling such delicate discussions a prerequisite to truly normalizing relations.
“This is something that we are going to stay on,” Obama said, adding that if the two countries could make progress on the issue, their relationship could blossom. “In the absence of that, I think it will continue to be a very powerful irritant.”