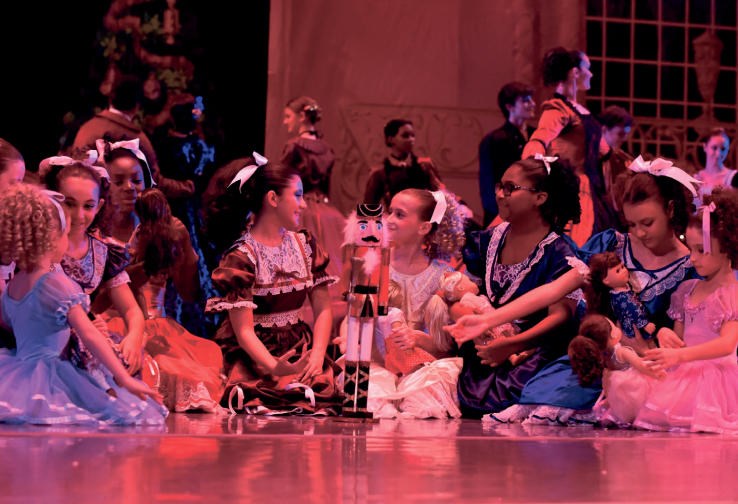 MALCOLM-JAMAL WARNER IS CELEBRITY JUDGE AT SLAM POETRY: The famed star of “The Cosby Show” and current hit “The Resident” will also perform his poetry and share thoughts about his career during an Artist Talk at the fourth annual Exit 36 Slam Poetry Festival. The three-day Pompano Beach Arts event attracting the premier spoken word artists in the country and will take place Dec. 911, at the city’s cultural venues. Event details and tickets are available at pompanobeacharts.org/exit-36.

HIP HOP NUTCRACKER: The Raymond F. Kravis Center for the Performing Arts will celebrate the joyous holiday season with ﬁve different concerts, shows and special presentations, including the contemporary dance spectacle set to Tchaikovsky’s timeless music in a remixed and reimaged version of the classic, performed by a supercharged cast of a dozen all-star dancers, along with a DJ, a violinist, and MC Kurtis Blow, one of hip hop’s founding fathers, Friday, Dec. 10 at 8 p.m., in the Alexander W. Dreyfoos Concert Hall, 701 Okeechobee Blvd. in West Palm Beach. Tickets starting at $25, can be purchased at kravis.org or at 561-832-7469 or 800-572-8471. Other holiday performances include Cirque Dreams Holidaze, Nov. 26-28; “Rudolph The Red-Nosed Reindeer: The Musical,” Dec. 23; Forbidden Broadway: The Next Generation, Dec 27-31; and Salute to Vienna New Year’s Concert, Jan. 1.

HIP HOP NUTCRACKER: Tchaikovsky’s 129-year-old ballet also is reimagined as a holiday dance spectacle Dec. 11 at the Adrienne Arsht Center for the Performing Arts of Miami-Dade County at 3:30 p.m. and 8 p.m. The production in its return for a seventh season features hip-hop pioneer Kurtis “The Breaks” Blow, the ﬁrst rapper to be signed by a major label in 1979. Forty-two years and a heart transplant later, hip-hop’s founding father is still performing as MC of The Hip Hop Nutcracker. Visit arshtcenter.org or hiphopnutcracker.com.

ORANGE BOWL PARADE DEC. 12: Miracle on the Mile – A Holiday Parade and Celebration returns to the streets of downtown Coral Gables, Sunday, Dec. 12 at 5 pm., free to the public, or upgrade for All Inclusive Grandstand tickets. The parade features a vivid array of marching bands, colorful floats, horses, community groups and performing units. The procession begins at the intersection of Alhambra Circle and Ponce de Leon Blvd, heads south on Ponce and turns right to cross in front of Coral Gables City Hall. Call 305-6621210 or visit juniororangebowl.org/what-we-do/community-events/parade.

THE BETSY HOTEL PRESENTS CAROLE ANN TAYLOR: The Betsy shines a light on Miami’s first lady of jazz on "Third Thursdays" monthly where the vocalist can be heard accompanied by pianist Brian Murphy. Taylor will be featured on Dec. 16, Jan. 20, and in March, April and May 2022 from 7 – 9 p.m., with Murphy performing 6 – 11 p.m. All performances are in the lobby at 1440 Ocean Dr., Miami Beach. Visit thebetsyhotel.com/calendar.

FOREVER MOTOWN: featuring Theo Peoples, former lead singer of The Four Tops, and Glen Leonard, former lead singer of The Temptations, along with a cast backed by musicians representing Motown royalty, to kick-off the holidays with soul, on Friday, Dec. 17 at 8 p.m. at the Coral Springs Center for the Arts, 2855 Coral Springs Dr. Tickets available at the box office 954-344-5990 and online at TheCenterCS.com.

DIANNE REEVES “CHRISTMAS TIME IS HERE”: The multi-Grammy Award winner rings in the holiday season with music from her celebrated album, and continues the 2021-2022 Jazz Roots series, Friday, Dec.17 at 8 p.m. at the Adrienne Arsht Center for the Performing Arts of Miami-Dade County, 1300 Biscayne Blvd., Miami. Tickets: $40 – $115 available at the box office by calling 305-949-6722, or online at arshtcenter.org.

COUNT BASIE ORCHESTRA AT PINECREST DEC. 18: The Pinecrest Gardens Jazz Series at Banyan Bowl presents the legendary orchestra just nominated for a Grammy Award as Best Large Jazz Ensemble for their new album “Live At Birdland,” having earned 18 Grammys among other notable achievements over their storied career, performed at every major jazz festival and concert hall as well as movies and television. and of all the bands of that era, the only one still thriving, recording and touring at their peak. A not-to-bemissed performance at Pinecrest Garden’s Banyan Bowl Stage, 8 p.m., $45 $50. Visit pinecrestgardens.org/entertainment/south-motors-jazz-series.

“RESPECT: THE MUSIC OF ARETHA FRANKLIN” DEC. 22: Get ready for an evening of legend who sold 75 million albums over the course of her outstanding career, winning 18 Grammy Awards, rightfully earning her title as “The Queen of Soul.” The American Pops Orchestra presents at 8 p.m. at the Raymond F. Kravis Center for the Performing Arts in West Palm Beach, featuring Grammy-nominated recording artist and Broadway star Deborah Cox from the National Broadway Tour of “The Bodyguard,” Rayshun LaMarr from “The Voice,” Nova Payton, and more, performing some of the greatest hits of Aretha’s career, including “A Natural Woman,” “Chain of Fools,” “Spanish Harlem,” “Since You’ve Been Gone,” and more. Tickets start at $25 available online at kravis.org or by phone at 561.832.7469.

SEND YOUR ANOUNCEMENTS: To news@sfltimes.com