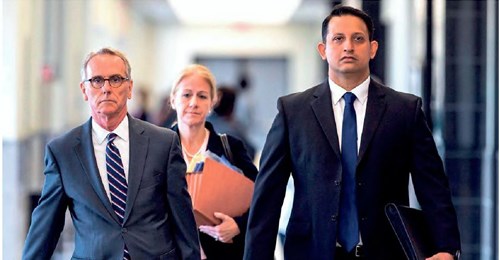 WEST PALM BEACH, Fla. — For the first time in 26 years, a Florida police officer is standing trial for an on-duty killing — and one of his defenses will be the state’s controversial “stand your ground” law.

The trial of fired Palm Beach Gardens officer Nouman Raja begins with jury selection Thursday. He is charged with manslaughter and attempted first-degree murder for the 2015 shooting of Corey Jones. Jones, a 31-year-old black musician, had just gotten out of his broken-down SUV when he was confronted by Raja, who was dressed in plainclothes and driving an unmarked white van. The shooting happened amid several highly publicized killings of black men by police officers nationwide, some leading to prosecutions. Raja, 41, could face a life sentence if convicted.

Prosecutors say an audio recording shows Raja never identified himself. They say that caused Jones, who had a concealed-weapons permit, to pull a handgun because he feared he was being robbed. They say Raja kept firing after he saw Jones throw away his gun, and lied to investigators about it.
“Absolutely nothing about him (Raja) provided any indication that he represented a law enforcement agency,” prosecutor Brian Fernandes wrote in court documents, calling Raja a “rogue officer.”

Raja’s attorneys argue he identified himself and feared for his life when Jones pulled his gun. They argued that Raja should be protected under the stand your ground law, which says anyone with a legitimate fear of imminent danger can use lethal force. The law also says it is up to prosecutors to prove the person’s fear was lacking or unreasonable. One exception is that the person cannot be the initial aggressor.

“Officer Raja was definitely not an aggressor,” lead defense attorney Richard Lubin wrote in court filings. “The inescapable fact is that Mr. Jones pointed his gun at Officer Raja.”

Raja’s attorneys have requested Judge Joseph Marx move the trial. They say the coverage by local news outlets has included prejudicial material, including a grand jury’s finding that the shooting was unjustified; that investigators concluded Raja lied; and that the case’s previous judge rejected his initial stand your ground claim.

Marx says he will consider the request if the six-person jury cannot be seated. In Florida criminal case, only first-degree-murder trials get 12 jurors.

The last Florida officer tried for an on-duty killing was Miami’s William Lozano in 1989. The Hispanic officer fatally shot a black motorcyclist who he said tried to hit him. A passenger died when the motorcycle crashed. The deaths resulted in three days of rioting.

Lozano was convicted of two manslaughter counts in a Miami trial, but an appeals court dismissed the verdict, saying the case should have been moved because of racial tensions. Lozano was acquitted at a 1993 retrial in Orlando.

Jones, who also worked as a housing inspector, was returning home from a nightclub performance early on the morning of Oct. 18, 2015, when his SUV broke down on an off-ramp of Interstate 95. His drums, valued at $10,000, were in back. Jones, the brother of former National Football League player C.J. Jones, had just purchased a .38-caliber handgun for protection.

Raja spotted Jones’ SUV about 3:15 a.m. He was wearing jeans, a T-shirt and a baseball cap because he was investigating auto burglaries. His sergeant testified at a hearing that he told Raja to don a vest marked “police” if he confronted anyone, but the vest was found inside the unmarked van. Recommended

Raja drove up the off-ramp, blocking Jones’ SUV. He told Palm Beach County sheriff’s investigators that when Jones got out, he identified himself, but then fired because Jones pulled a gun. He said Jones ran down an embankment and pointed the gun again, so he fired more shots. Jones died at the scene.

Investigators have said that Raja didn’t know Jones was speaking to a tow truck dispatcher on a recorded line. Raja is never heard identifying himself.

Prosecutors say Raja saw Jones throw down his gun but kept firing, which is why he is charged with attempted murder. Investigators were unable to determine when the fatal shot was fired, but it struck Jones in the back.

Raja then used his personal cellphone to call 911 with the operator picking up 33 seconds after the last shot. Raja is recorded yelling orders to drop the gun; prosecutors say he was trying to mislead investigators into believing he hadn’t seen the gun thrown. Jones’ body was found 200 feet from the SUV and 125 feet from his unfired gun.

Palm Beach Gardens fired Raja, who was in his employee probation period after transferring there months earlier from a neighboring city. He was charged in 2016 and has been under house arrest.

The trial is expected to last three weeks.