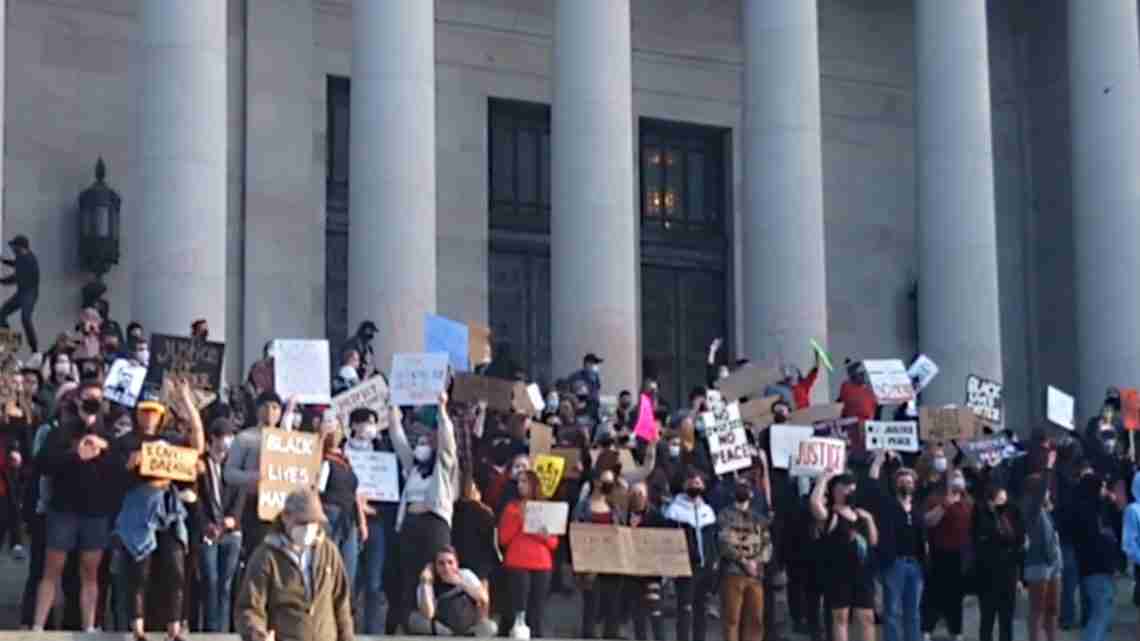 OLYMPIA, Washington—Protesters who marched Tuesday in Olympia, Washington remained peaceful but made their feelings about law enforcement plain, chanting on the steps of the state capitol that Americans who wear law-enforcement badges are “bastards.”

“A-C-A-B! All cops are bastards!” the call-and-response went.

Others yelled “No Trump! No KKK! No fascist USA!”

Activists have demonstrated daily since May 25 in a sprawling variety of U.S. cities, angry at the death of George Floyd in Minneapolis.

Police officer Derek Chauvin was videotaped kneeling on Floyd’s neck during his arrest. He is charged with second and third degree murder. Three other officers who participated in the arrest are charged with aiding and abetting him.

The group that organized Tuesday’s protest, Olympia Showing Up for Racial Justice, says it its purpose is “mobilizing & organizing white people” for social justice.

In contrast with nighttime clashes that have pitted police against rioters and looters outside Olympia city hall a few blocks away, Tuesday’s daytime march was peaceful.

Law enforcement was scarce. Organizers said about 1,000 people participated, including those who listened to 90 minutes of speeches.

While some speakers implored attendees to vote, another called for the system to be “burned down”.

The afternoon included a kneeling “moment” of silence that lasted nearly 9 minutes—the length of time Floyd was pinned to the ground by Chauvin’s knee before he was pronounced dead.