ON THIS DAY IN HISTORY 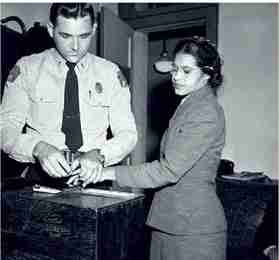 On Dec. 1, 1955, Rosa Parks, a black seamstress, was arrested after refusing to give up her seat to a white man on a Montgomery, Alabama, city bus; the incident sparked a year-long boycott of the buses by blacks. ON THIS DATE:

In 1824, the presidential election was turned over to the U.S. House of Representatives when a deadlock developed between John Quincy Adams, Andrew Jackson, William H. Crawford and Henry Clay. (Adams ended up the winner.)

In 1862, President Abraham Lincoln sent his Second Annual Message to Congress, in which he called for the abolition of slavery, and went on to say, “Fellow-citizens, we can not escape history. We of this Congress and this Administration will be remembered in spite of ourselves.”

In 1941, Japan’s Emperor Hirohito approved waging war against the United States, Britain and the Netherlands after his government rejected U.S. demands contained in the Hull Note.

In 1942, during World War II, nationwide gasoline rationing went into effect in the United States; the goal was not so much to save on gas, but to conserve rubber (as in tires) that was desperately needed for the war effort.

In 1952, the New York Daily News ran a front-page story on Christine Jorgensen’s sex-reassignment surgery with the headline, “Ex-GI Becomes Blonde Beauty”. In 1965, an airlift of refugees from Cuba to the United States began in which thousands of Cubans were allowed to leave their homeland.

In 1969, the U.S. government held its first draft lottery since World War II.

In 1990, British and French workers digging the Channel Tunnel between their countries finally met after knocking out a passage in a service tunnel.

In 1997, a 14-year-old boy opened fire on a prayer circle at Heath High School in West Paducah, Kentucky, killing three fellow students and wounding five; the shooter is serving a life sentence.

In 2004, Tom Brokaw signed off for the last time as principal anchor of the “NBC Nightly News”; he was succeeded by Brian Williams.

Ten years ago: The National Bureau of Economic Research officially declared the U.S. to be in a recession; the Dow industrials lost 679 points to end a five-day win streak. President-elect Barack Obama announced his national security team, including Hillary Rodham Clinton as secretary of state, Eric Holder as attorney general and Janet Napolitano as homeland security secretary; Obama also said that Robert Gates would stay on as defense secretary. Actor Paul Benedict, who played English neighbor Harry Bentley on “The Jeffersons,” died on Martha’s Vineyard, Mass. at age 70.

Five years ago: A New York City commuter train rounding a riverside curve derailed, killing four people and injuring more than 70 (federal regulators later said a sleep-deprived engineer had nodded off at the controls just before taking the 30 mph curve at 82 mph, causing the derailment). Edward J. “Babe” Heffron, 90, whose World War II service as a member of Easy Company was recounted in the book and television miniseries “Band of Brothers,” died in Stratford, New Jersey.

One year ago: Retired general Michael Flynn, who served as President Donald Trump’s first national security adviser, pleaded guilty to lying to the FBI about reaching out to the Russians on Trump’s behalf; he said members of the president’s inner circle had, at times, directed his contacts. (Sentencing is scheduled for Dec. 18, 2018.) The president dismissed as “fake news” reports that he wanted to oust Secretary of State Rex Tillerson. (Trump replaced Tillerson with CIA Director Mike Pompeo in March, 2018.)

Next post FBI DATABASE TO TRACK DEADLY ENCOUNTERS WITH POLICE