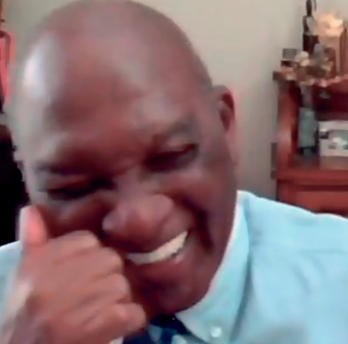 PAHOKEE, Fla. – To say that excellence comes out of Pahokee, Florida is clearly an understatement. But sadly the Western parts of Palm Beach County, encompassing the Glades area, are often treated like the stepchild of their more popular and affluent Eastern cities.

But if you take a look at members and graduates of the East Lake High School, the ﬁrst public all-Black high school in Pahokee, you’ll see that there’s apparently something dynamic in the water over there. Call it grit, determination, fortitude or attitude – there’s something that makes them abundantly and wildly successful in life.

Take Earnestine Bailey Baker, a 1963 graduate of East Lake. Today she has ties to the development of the COVID-19 Moderna vaccine. Baker is currently executive director emerita of the Meyerhoff Scholars Program at the University of Maryland, Baltimore County. One of the students under her leadership in that prestigious program for aspiring Black scientists is the Black female scientist and immunologist who initiated and developed the Moderna vaccine. Dr. Anthony Fauci, the worldwide face of the coronavirus battle, often publicly praises Kizzmekia “Kizzie" Corbett for her heroism in developing the vaccine. But Corbett was under the program directorship of Baker for years before her history-making role with the vaccine. In essence Baker was not only Corbett’s leader but also a mentor. Today the ladies are still connected and Corbett praises the Meyerhoff Scholars Program for being an integral part of her training and development. Baker is proud of Corbett’s groundbreaking science, but proudly points out the many Meyerhoff graduates who have made incredible strides in the scientiﬁc community around the world. And while they look up to Baker, she too had mentors as she got her early start in Pahokee. “Mrs. Daisy Brown Lanier (head librarian at East Lake) and Mr. Willie Pyfrom (band director), were major inspirations to me. They were always exposing us, providing for us, and encouraging us to aspire for greatness. I love them. They were a tremendous inspiration,” said Baker via phone from her Baltimore ofﬁce.

But Baker wasn’t nearly the only success story out of East Lake. They are doctors and lawyers, educators, entrepreneurs and history makers.

Joseph Williams made history by becoming one of the first two people out of Pahokee to make FAMU’s Marching 100 band. He too, credits band director Pyfrom for being instrumental in getting him into college and thereby changing his life.

Today, Williams is a retired educator and school board member in Seminole County, and is chairman of the East Lake Scholarship Fund, Inc., which provides scholarships to worthy Pahokee students who Williams says are obviously smart and astute but may not have the financial means to go to college. The annual scholarship program was held last Saturday on Zoom. Ironically, many of the East Lake alumnae are so vested in the young Pahokee students that one even took part in the Zoom ceremony from her hospital bed.

Renaee Samuels, 70, who grew up in a labor camp in the Glades, went on to earn her bachelor’s from Florida State University and her Master’s from Nova, and said she needed to be on hand, even from her hospital bed.

Dr. Bennie Dorothy Osborne, Ph.D., of Miami Gardens, was determined to make something of her life after bean-picking as a youngster in the Glades. She earned her bachelor’s, two master’s and a Ph.D. from Florida International University after graduating from East Lake. Her late mother, Mardenia O. Williams, died of COVID-19 last year. Osborne’s family was honored by a Miami Gardens ofﬁcial and captured on television in the aftermath of her mother’s nursing home death.

John Williams, co-chair of the scholarship committee, is into royalty, literally! While he was principal of Booker T. Washington Middle School in Miami in 1991, the Queen Elizabeth, during her United States visit, actually visited Williams’ school, a predominantly black public school. It was an historic moment for the nation and for Williams as a Black principal. The Queen and her husband, Prince Philip, were grateful guests of Williams. Williams had graduated from East Lake in 1963 before attending Bethune Cookman College. He was a school principal for 16 years and also a supervisor and teacher at Florida Memorial University. He is currently a retired educator who cherishes his role in advancing the lives of Pahokee students.

Dr. Richard Johnson, M.D. is a highly touted medical doctor in West Palm Beach having ensured the health of thousands. His wife, Elizabeth Johnson, a retired lawyer, supports her husband with the East Lake Scholarship Fund.