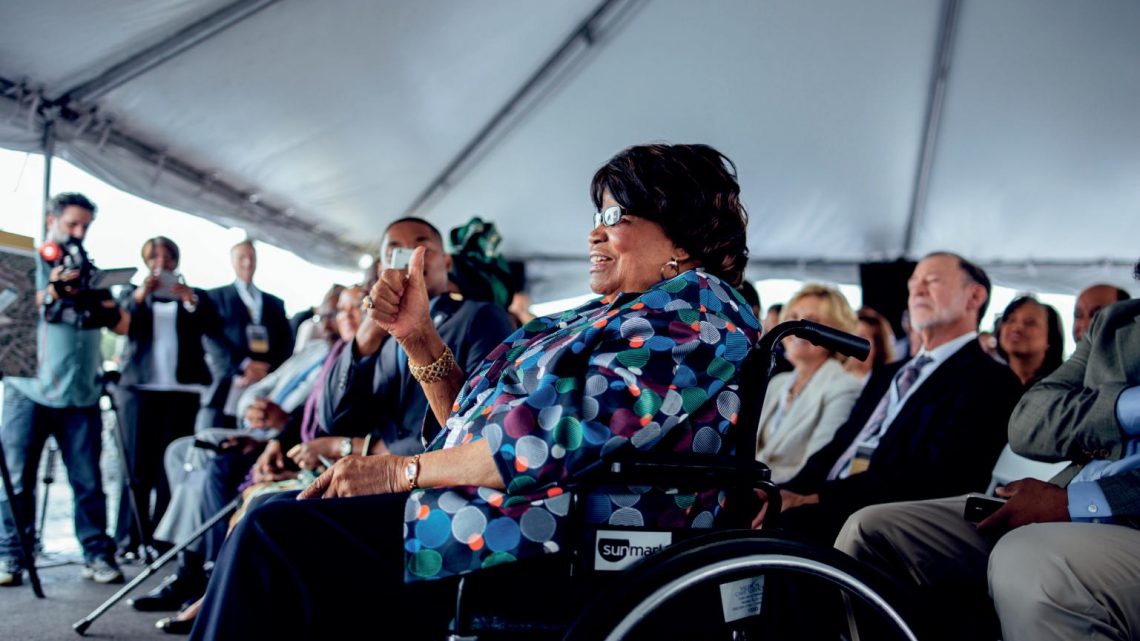 Miami – Former U.S. Congresswoman Carrie Meek blazed the trail for Black women in politics and dedicated most of her life to helping needy people and their communities.

Meek died at her home following a long illness on Sunday, Nov. 28, her family said. She was 95.

Meek was born Carrie Pittman on April 29, 1926 in Tallahassee, Fla. Her grandparents had been enslaved and her parents were sharecroppers. Meek graduated from Florida A&M University and earned a master’s degree from the University of Michigan. She moved to Miami in 1961 to serve as special assistant to the vice president of Miami Dade College. The college was desegregated in 1963 after Meek pushed for integration.

But public service was Meek’s true calling. She earned a seat in the state Legislature in 1979 when she won a special election to replace Gwen Cherry who had died in a car accident. She served in the Florida House until 1982.

That same year Meek also made history by becoming the ﬁrst Black woman elected to the Florida Senate where she served on the Education Appropriations Subcommittee. As a state senator she championed efforts to build thousands of affordable housing units in Black neighborhoods.

But she had political ambition to serve in a higher ofﬁce. In 1992 a court-ordered congressional redistricting plan drew three districts with substantial African American populations, designed to elect Black candidates in compliance with the federal Voting Rights Act.

Meek ran for one of those seats in the 17th District which covers northern Dade County. Along with Corrine Brown and Alcee Hastings, Meek became one of the ﬁrst Black members of Congress from Florida since Reconstruction.

Meek’s ﬁrst big challenge was helping her district recover from the massive damage caused by Hurricane Andrew in 1992. Her efforts as a member of the powerful Appropriations Committee helped to provide $100 million in federal assistance to rebuild Miami-Dade County.

In addition, Meek successfully focused her attention on issues such as economic development, health care, education, and housing. She led legislation through Congress to improve Miami-Dade County’s transit system, airport, and seaport; construct a new family and childcare center in northern Dade County; and ﬁnance advanced aviation training programs at Miami-Dade Community College. Meek was an advocate for Haitian immigrants and senior citizens.

Meek challenged the U.S. Census Bureau, saying her district was undercounted in the 1990 Census. She said her constituents were cheated in the controversial 2000 presidential election between Republican George W. Bush and Democrat Al Gore. Meek and other members of the House of Representatives objected to Bush being awarded Florida’s 25 electoral votes after a contentious recount. She refused to attend a meeting with Bush following his inauguration.

She retired from Congress in 2003, and was succeeded by her son, Kendrick Meek. For her years of public service, Meek was honored with many accolades, and Miami Dade College’s Carrie P. Meek Entrepreneurial Education Center in Liberty City was renamed after her.

Following the Meek’s death, family members, friends, and political and professional colleagues her a hero. Meek’s daughter Lucia Raiford, who has been president and CEO of the Carrie Meek Foundation for four years, said her mother was a one-of-a-kind person.

"She was a mother ﬁrst and one who set an example on how to live your life and how to best use your time on earth," Raiford said. "She was ﬁercely independent and an incredible hard worker. She was thoughtful and caring and always put her community ﬁrst."

Raiford said she followed in her mother’s footsteps by serving the community in a nonpolitical role. "My mother’s legacy was bigger than being elected to ofﬁce," she said. "Her service began at a very young age after she ﬁnished college. Her generosity and experience touched a lot of people, especially the people around her."

Matthew Beatty, vice president and CEO for the Carrie Meek Foundation, said his family and the Meek family have been close for years. Beatty, 38, said he was fortunate that his parents provided him with a comfortable lifestyle while growing up but Meek was a different story. He noted that her grandparents were sharecroppers but she made an incredible transition capped off by serving in the U.S. Congress.

"Because of her ﬁghting spirit she ended up in the walls of Congress with her work ethics and dedication to helping those around her who needed it," he said. "She was an inspiration to all."

Beatty added that the work Meek fought and pushed for is more urgent now because leaders like her no longer exist in political ofﬁce. "It’s our turn and responsibility to pick up where they left off," he said.

Congresswoman Frederica Wilson said Meek mentored her throughout her political career. Wilson, also a Democrat, said Meek was a true champion for Black communities in Florida and throughout the world. She added that as a former state legislator and one of the ﬁrst American Americans from Florida elected to Congress since Reconstruction, Meek was an exemplary role model for elected ofﬁcials like her who broke down barriers so that "we could follow the path she paved and succeed."

"Her legacy of leadership and vision in education, social and economic justice and public service is exemplary and worthy of the many accolades she earned," Wilson said. "Congresswoman Meek was the granddaughter of slaves who likely never have imagined how far she would go but to the beneﬁt of genernations yet unborn, her parents encouraged her to believe that she could achieve anything she set her mind on and she did."

"Meek was a sweet, sweet spirit who permeated our community for many years," Wilson added. "Her presence in a room spoke volumes for generations yet unborn. My thoughts and prayers are with her family."

Republican Congressman Mario DiazBalart said Meek was an icon and invaluable friend. "Carrie was a living legend and an institution," he said. "Her passion and conviction made everyone around her love, admire and respect her. There is no doubt that her legacy will leave a lasting imprint for generations to come."

Congresswoman Debbie Wasserman Shultz, a Democrat, said Meek was a tireless ﬁghter for the powerless and one of Florida’s most quotable truth tellers to the powerful. "Whether she was helping knock down the exclusionary remnants of Reconstructionera representation for African Americans, serving her South Florida community as an educator or providing for all of Florida and the nation as a powerful House appropriator, Carrie Meek always helped others and never shied from standing up for equality and justice for all," said Wasserman Shultz. "May her compassion, integrity, and rich legacy of doing good be a pillar of strength for the Meek family as they mourn their matriarch, and may her memory be a blessing."

T. Willard Fair, president and CEO of the Urban League of Greater Miami, one of the largest Black owned urban residential development companies, said Meek is the closest relationship he has had with an elected ofﬁce next to former Miami Commissioner Miller Dawkins. Fair said he has known her for 57 years, and that she always kept her promise to help Black communities and cut through red tape in Washington D.C. to secure funding for his organization to build affordable housing for seniors in Overtown.

Fair said he named three residential buildings after her – two named M and M, which stands for Carrie Meek and Miller Dawkins in Liberty City and Meek Manor, a rental community for seniors in Overtown. "You have to really care about a person to name three buildings after them before they die," said Fair. "She never lost touch with the community while serving in ofﬁce. Other people running for ofﬁce failed on their promises. Meek never did that. I wouldn’t be where I am today had she not embraced my dream."

William Talbert, special advisor for the Greater Miami Convention and Visitor Bureau, said he began working with Meek in 1971 when he was a park planner for MiamiDade County. He said she worked in the recreational department at Miami Dade College and Meek created a recreation and cultural task force for Model City for better programs in the areas.

"Most parks and cultural facilities in Model City are the results of her great work," said Talbert. "Those were great days and we did great things back then. Everything I did was the inspiration of Carrie Meek. I learned as much from her in a few years than I learned in college. She was that good."

Talbert, 76, said when he moved to the Miami-Dade County manager’s ofﬁce as a staff member in the federal aid coordinator’s ofﬁce in 1976, staff was able to bring matching federal dollars to Model City. "That was Meek’s vision to make a difference in the community," he said. "Hers was a lifetime of making a difference."

Newly elected Miami City Commissioner Christine King said Meek was a trail blazer and inspiration for all. "She set the bar high for public servants, shattering the glass ceiling and paving the way for women like myself," she said. "She will be missed."

Meek is survived by her three children.

Services for Carrie Meek include:

In lieu of flowers, the family is requesting donations to the Carrie Meek Foundation, 4000 NW 142nd St., Opa-locka.

Next post Omicron variant: Another lockdown on the horizon?