Police brutality is the symptom; systemic racism the disease; it’s time for a vaccination 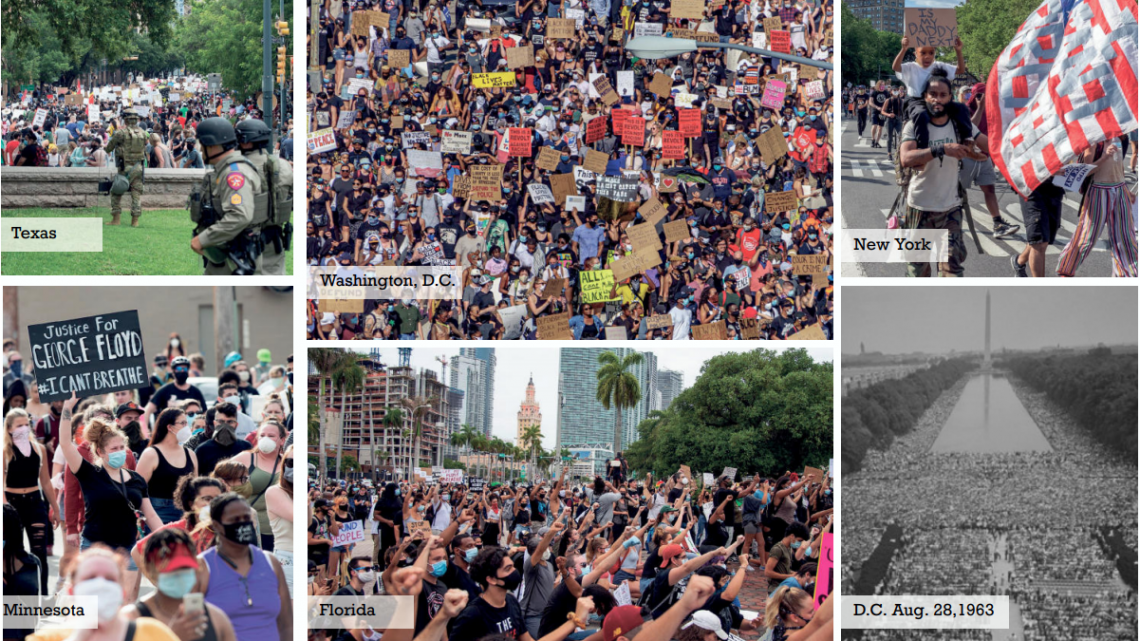 Some demonstrators against George Floyd’s killing have demanded action to end not only police brutality but also racial inequality as a whole. Their call should inform the “March on Washington” which the Rev. Al Sharpton announced, while eulogizing Floyd on June 4, to coincide with the 57th anniversary of the rally that Martin Luther King Jr. led.

Sharpton said the rally leaders will include families of those killed by police, including Floyd and Eric Garner, both choked to death by police, one for allegedly trying to use a counterfeit $20 bill to buy groceries, the other for selling loose cigarettes.

King’s 1963 “March on Washington for Jobs and Freedom” secured civil rights for African Americans but he was assassinated five years later, leaving the “jobs” agenda unfulfilled. Succeeding civil rights leaders, particularly the Rev. Jesse Jackson, have attempted to take up the cause, without much success, and even the gains from King’s activism have been rolled back.

The time, though, is ripe to demand dismantling of all institutional barriers to equality – in healthcare, jobs, housing, access to funding sources, quality education, police brutality. The inequities have been dramatically exposed by the COVID-19 pandemic in which 50 African Americans out of every 1,000 have been dying, compared to 20.7 whites.

The inequality is a direct result of the systematic repression starting with slavery and continuing with sabotage of Reconstruction, Jim Crow racist laws and using the criminal justice system to control the menfolk and destroy their families.

Lynching became the preferred “method of social and racial control meant to terrorize black Americans into submission and into an inferior racial caste position,” Jamiles Larter and Sam Morris wrote in The Guardian in 2018. “Victims would be seized and subjected to every imaginable manner of physical torment, with the torture usually ending with being hung from a tree and set on fire. More often than not, victims would be dismembered and mob members would take pieces of their flesh and bone as souvenirs.”

At least 4,000 African Americans were lynched between 1882 and 1968, including 257 in Florida. Some observers say police killings is a modern version of the repression. Yet, only now is Congress finally about to make lynching a federal crime, after 200 attempts in the last century.

In between, whites staged a coup against the duly elected African American-dominated city government of Wilmington, NC, on Nov. 10, 1898, ousting the mayor, aldermen and police chief and burned down the

Daily Record newspaper building. On May 31 and June 1, 1921, a mob destroyed the Greenwood District of Tulsa, OK, which had been so prosperous that it became known as “Black Wall Street.” The mob killed at least 300 residents and burned about 35 blocks containing 1,200 homes. And, over six days in January, 1923, a mob burned down the town of Rosewood, FL, killing at least six residents.

All this history is glorified by symbols celebrating the Confederacy, the insurrection against ending slavery, some 1,500 of which exist, including at least 61 in Florida. A significant step towards ending these markers of enduring white supremacy came recently when the Democratic governor of Virginia, Ralph Northam, announced that Confederate statues will be taken down, including a 100-foot one of Robert E. Lee, built in 1924 — in a state which served as the capital of the Confederacy and which has at least 223 such memorials.

So encouraging events are happening but Sharpton’s march is unlikely to dwell much on that past because of the immediacy of police brutality. However, without that reference point, dealing with inequality will, once again, fail to address the root cause of racial suppression. That root was planted with the enslavement of 600,000 Africans between 1526 and 1866. The U.S. Constitution counted each of them as three-fifths of a per-

son, giving slave owners lopsided political power and preserving the fortunes of men such as Isaac Franklin and John Armfield, who “created a modern machinery to support the business of human trafficking,” said Maurie D. McInnis, a professor at the University of Texas at Austin.

Discussions of long-overdue compensation – reparations — have put the tab at between $300 million proposed in 1969 by civil rights pioneer James Forman in his “Black Manifesto,” to as high as $17 trillion. An earlier form of compensation devolved into a broken promise: As the Civil War was ending in 1865, Gen. William T. Sherman, with approval of President Abraham Lincoln and Congress, distributed land to the freed slaves, the so-called “40 acres and a mule” initiative. But shortly after Lincoln was assassinated on April 15, 1865, his successor, Andrew Johnson, took the land away.

This is the backdrop against which police brutality must be judged, what Chicago Mayor Lori Lightfoot said she heard a protester describe as COVID1619. Sharpton and his colleagues must produce, before or during the march, a blueprint for change, a vaccine, if you will. Past marches and speeches alone have yielded only temporary appeasement but that will not be enough in these times which are very different from the days when King marched on the nation’s capital. More than 50 years later, life for his people has only worsened.