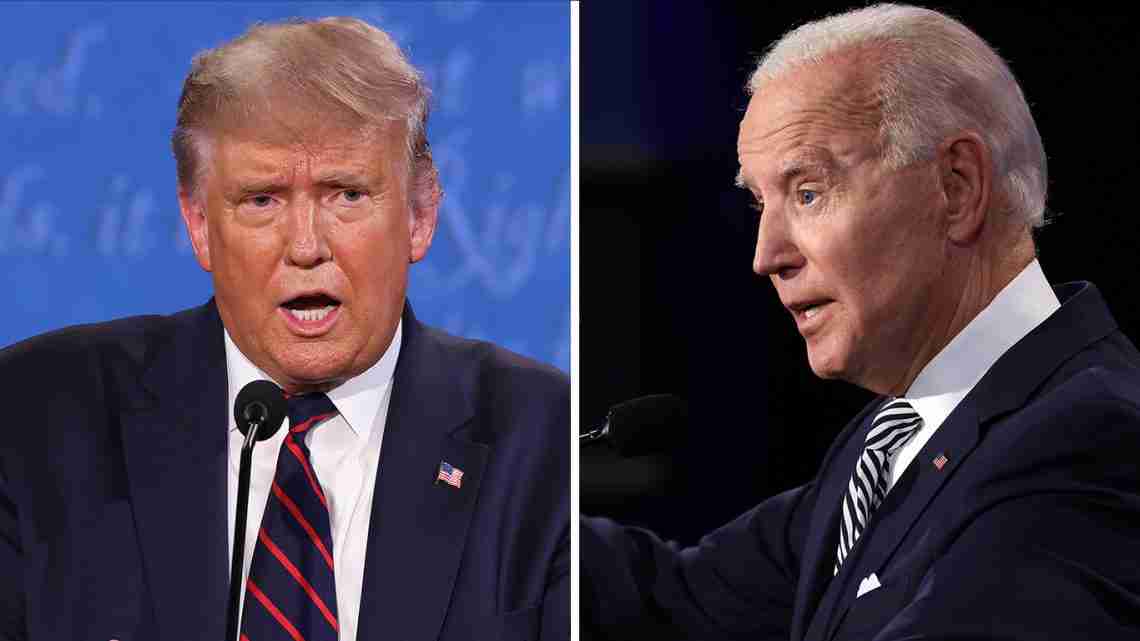 Voters might already have gotten a glimpse of both President Donald Trump and former Vice President Joe Biden’s strategy for tonight’s big debate.

First, Trump. In an interview Wednesday with sports journalist Jason Whitlock, he asked how he should handle Biden tonight.

Whitlock’s short and simple response: “Let Joe Biden talk. He’ll do the work for you.” The implication: Biden, known for making gaffes, could make a bad one. Maybe even an honest gaffe (there is such a thing) about how he’ll raise taxes. And then Trump, the New York street fighter, could move in for the kill.

But letting Biden talk certainly wasn’t the strategy Trump pursued in their now-infamous Cleveland shout-fest of three weeks ago, when he frequently interrupted and talked over Biden, exasperating debate moderator Chris Wallace of Fox News. To be fair, Biden interrupted a few times, but

Trump was seen as the more egregious offender.

The interrupter-in-chief appeared to pay a price. The Real Clear Politics average of all polls saw Biden’s lead jump four points to 10 in the days after the debate, while FiveThirtyEight showed Biden gaining three points, also giving him a 10-point advantage. Heading into tonight’s clash, which takes place in Nashville, RCP has Biden ahead by 7.7, but FiveThirtyEight still shows him up double digits.

The Cleveland debacle has sparked changes. As usual, both Trump and Biden will get two minutes to answer questions from the moderator, which tonight will be Kristen Welker, a longtime NBC News White House correspondent. But the Commission on Presidential Debates says it will turn off each candidate’s audio feed while his rival has the floor.

Donald Trump isn’t a man used to being muzzled. Trump, who had already been on the warpath over the commission’s prior offer of a virtual second debate, which he rejected, isn’t too happy about this. Nobody silences the Donald.

Trump famously doesn’t bother with debate prep, and he hasn’t bothered this time, either. He’s been warming up instead with rallies, including one in Arizona on Tuesday, where he complained about never-ending coverage of the pandemic. He called CNN “dumb bastards” for the network’s reporting on the pandemic which has killed some 222,000 people and appears to be surging again in much of the country.

But Biden is sure to will bring up the worst health crisis the United States has faced in a century early and often tonight. The former veep has been holed up in his Delaware home preparing.

Trump is also unhappy about tonight’s topics. In addition to the pandemic, they include, “American families,” “race in America,” “climate change,” “national security and leadership.”

His campaign chief Bill Stepien fired off a two-page complaint to the debate commission, urging it to “rethink” the topics. He wants more on foreign policy, though that sounds like it could be handled during the national security category.

Meantime, look for Biden to take up where his boss, former President Barack Obama, left off yesterday. Obama, making the first of what are expected to be numerous appearances on Biden’s behalf between now and November 3, took to a stage in Philadelphia to rip his successor.

Obama—the first Democrat since Franklin Roosevelt to win back-to-back terms with more than 50% of the vote—knows how to get under Trump’s thinnest-of-thin skins as well as anyone. Listening to him yesterday, this particular passage stuck out:

That’s good stuff. Look for Biden to say something similar in his opening statement when the audience is biggest (73 million people watched their Cleveland debate), and again at the end.

Obama’s passage rings true, Even Trump supporters deep down know there are a lot of times when he says crazy things and doesn’t “act presidential.” Biden tonight will try and can expose that contrast to an exhausted electorate.