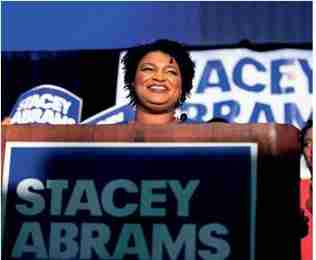 If the former state House minority leader wins the general election in November, she’ll become the first black woman governor in the U.S. Abrams got a last-minute boost with an endorsement — in the form of a 60 second robo-call — from Hillary Clinton.

In the ballroom of a downtown Atlanta hotel, Abrams supporters trickled in to a soundtrack of R&B and hip hop songs.

Two young women — one black and one white and both wearing shirts reading “Elect Black Women” — huddled over a table talking and laughing as Rihanna’s “Diamonds” played in the background. People mingled and sipped drinks as a slideshow of images of Abrams and a diverse collection of supporters played on two large screens in the front of the room.

Meanwhile, the Republican contest centered largely on who loved guns the most and was toughest on immigration. The Republican field includes five white men: former legislators, officeholders and businessmen, some with decades of political experience and others positioning themselves as outsiders challenging the establishment.

If no candidate receives more than 50 percent — a strong possibility given the crowded GOP field — the two with the most votes will advance to a July 24 runoff.

Cagle walked through a crowd of supporters shaking hands, offering hugs and taking selfies while country singer Tyler Hammond performed on stage. Hundreds packed the venue in Gainesville for his watch party, chanting “Cagle, Cagle, Cagle” before he stepped onstage with his wife, Nita.

In Athens, supporters of Kemp streamed into the upstairs ballroom of the downtown Holiday Inn around 7 p.m. to await returns at the candidate’s watch party.

Kemp is hoping to fend off his rivals to finish at least second in order to secure a runoff spot. Kemp thanked his supporters and said he was “looking forward to being in that runoff.” The candidates are vying to succeed term-limited Republican Gov. Nathan Deal, who has held the office since 2011.

All of Georgia’s statewide constitutional offices are up for grabs this election cycle, including those vacated by Cagle and Kemp, as well as the position of insurance commissioner vacated by Ralph Hudgens, who isn’t seeking re-election.
Georgia’s 180 state House and 56 state Senate seats are also up for a vote. Five of Georgia’s U.S. House members face primary challengers. Associated Press writers Kate Brumback in Atlanta, Jeff Martin in Athens, Jonathan Landrum in Gainesville and Alex Sanz in Johns Creek contributed to this report.

Next post Broward College names Greg Haile as its next president